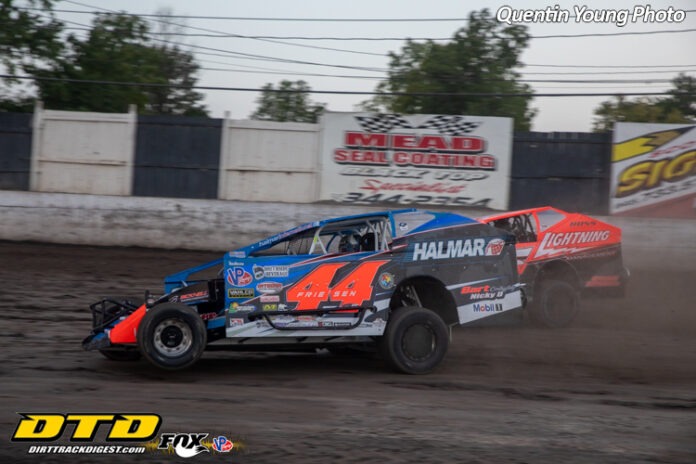 MIDDLETOWN, NY – 2021 may be a season that goes down in the record books as one of the strongest seasons in Stewart Friesen’s career. Friesen extended his points lead over Matt Sheppard and added another crown jewel checkered flag to his collection by capturing the Super DIRTcar Series Centennial 102 at Orange County Fair Speedway in another display of outright superiority in speed over the field.

“It feels good to win, especially here,” said Friesen. “This is a place we’ve been good at the past five years or so on the old and new surface. [Matt] Sheppard is really, really good here, it’s a lot of work to beat him here. We maintained speed all night, despite not going lights out on our time trial run, the speed carried through all night. Fuel was close at the end with the extra caution laps and how much we were on the gas.  It was tight even though we filled it up, but we made it and got the win.”

Billy Decker and Chris Hile led the field to the green flag, and the ‘Franklin Flyer’ wasted no time in getting out front early, building a small lead over Hile and the rest of the field. There was some chaos further back in the pack as Tyler Boniface came off the pace in the middle of the backstretch, sending the back of the field into evasive action. All drivers missed Boniface as he came back up to speed, but an early yellow for a problem on Dillon Steuer’s ride found him off the pace in turns three and four.

On the restart, the top three of Decker, Hile, and L.J. Lombardo stayed steady for the opening circuits. Behind them, Anthony Perrego was on the charge. A regular at the historic speedway, Perrego danced around fourth place starter Billy VanInwegen to claim fourth by lap seven. Friesen followed Perrego through, shuffling VanInwegen into the hands of Jimmy Horton, who then pounced on the opportunity to take sixth by lap 12.

Friesen was not done yet, as he continued his charge from sixth by passing Perrego to take fourth away from him. By lap fifteen, Friesen was knocking on the door of Lombardo for third and made the pass stick on lap seventeen. Four laps later, Perrego moved past Lombardo to move himself back into fourth place on lap twenty-one, with Horton following Perrego through to shuffle Lombardo to sixth

The second yellow of the night broke up the action on lap 24 as Erick Rudolph came into the pits with a shredded right rear tire. Jack Lehner and Jimmy Phelps followed Rudolph into the pits and returned to the track before the green flag.

On the lap 28 restart, Decker continued to hold a lead over Hile, but Friesen was now a looming threat behind Hile. Friesen moved into second on lap 31 in what became a three car battle with Hile and Perrego for second. Friesen eventually pulled away, but Perrego and Hile continued battling for third for most of this green flag run. Behind them, Sheppard had made his way up to seventh from his 16th starting spot, and Boniface had charged back through the field to run eighth behind Sheppard.

Up front, Friesen caught Decker by lap 40 and was able to use an old school pick-and-roll with a lapped car to take the lead for good on lap 44. Perrego made his move on Hile at the same time, claiming third all while reeling in Decker. As Friesen pulled away, Decker and Perrego battled for second, but Decker proved too strong and held the spot.

“I was pacing with [Billy] Decker there for awhile”, said Friesen. “I didn’t want to go too fast and burn the tires off getting up to him. It seemed like the easier I drove, the further he came back towards me. The lappped traffic helped us get around him too.”

Behind them, Sheppard pulled off a two-for-one special to move into fifth. Sheppard stuffed his car underneath the battling duo to claim fifth while setting his sights on fourth and third ahead. A three car battle for sixth ensued behind Sheppard, as Horton, Williamson, and Boniface traded places dozens of times in an all out war for sixth.

The battle was be short-lived, however. Boniface would slide into the turn one wall on lap fifty-nine as the right rear gave up the ghost to bring out the race’s third caution period. Phelps came to a stop under the yellow as well, with some smoke crawling out of his machine, putting an early end to his night.

On the lap 65 restart, Friesen continued to lead as Hile took third back from Perrego. The yellow quickly came back out two laps later though, as Horton broke on track and pulled pitside early, ending his night.

Friesen faced his last major challenge at the lap 71 rest as Decker and Hile made it a brief three-wide battle for the lead. However, Friesen remained strong and pulled back away from the duo, who then fiercely battled for second.

On lap 80, Hile got second for good, driving around Decker on the top side. Right as Hile officially made the pass, the yellow flew for Erick Rudolph again. This time, a mangled front end would end a streak of good runs for Rudolph on the tour. VanInwegen and Keith Flach both made trips pit-side during the yellow with another round of blown right rear tires to add to an already long list of shredded rubber.

Friesen jumped back out to a lead at the green but the race quickly went back under caution as Tommy Meier’s strong run in the top 10 came to an end after hitting the outside wall. Both ends of the 33.3 were fairly bent up as one of the local favorites saw his night end early.

Another restart only got the field another three laps as Steuer brought another yellow out, this time with considerable right-side damage, ending his night. In that time, Decker had been shuffled out of the top five, as Perrego snatched second with Hile and Sheppard in tow.

Friesen pulled away and left the rest of the field to settle it out amongst themselves. Hile held off a challenge from Sheppard to hold third as the field clicked the laps off.

However, this race could not finish without a pinch of last-second drama. Decker broke with three laps to go to bring out the final caution, with a left rear shock to blame for Decker coming off the pace.

It seemed as if the finishing order was set, but a heart-breaker for Perrego occurred, as his ride broke with two laps to go, giving Hile second and Sheppard third as Friesen drove away to claim the checkers.

“The number of restarts made it a little crazy at times,” stated Friesen”  We were chasing the seams all night looking for bite and we found it. The Halmar guys have given me an incredible car this year.”

It seems like every time the Super DIRTcar Series rolls into town, Stewart Friesen is the favorite to win. The only thing that has hampered Friesen in this most recent stretch of races was a right front flat tire at Land of Legends Raceway in the first twin 60 of their doubleheader. However, the second twin 60 and tonight were what we have seen from Friesen all year, which is nothing short of dominance.

Hile brought home a season-best triumph of second place. Hile was a contender for the win at a few points throughout the race, and held off some of the best to claim second.

“We came down here for the Centennial a few years ago and ran really well there,” said Hile. “When it gets wide and slicked off like it does back home, we’re really good. This place is about momentum, and that’s what we’ve been good at. Restarting behind Stewart [Friesen] on the top helped a lot when we were in fourth, it helps to fire off the leader and carry the momentum into turn one.”

It was Hile’s best series finish of the 2021 campaign.  He finally had things go his way for a change.

“It’s nice to really earn this run and hold those guys off,” added Hile. “We’ve had good cars all year and we’ve just felt good with our operation. We’ve had some bad luck which has hurt our season a little bit. At Ransomville we worked our way to fourth and blew a right rear at the end. We ran out of fuel on the scales tonight, and I knew fuel was going to be an issue with those caution laps. I was seeing Ransomville all over again, but our luck went the right way. This series is tough sledding, and it feels really good for us to finish second to a guy like Stewart Friesen.”

Sheppard is arguably a contender for drive of the night. He started 16th and didn’t seem to run into any kryptonite on track. ‘Super’ Matt worked his way through the field methodically to be there when it counted, rounding out the podium on the night.

“I felt pretty good in time trials, but it did not translate to the heats very well,” said Sheppard. “There wasn’t a lot going on in the heats, so we had to start from 16th. The feature was really tough sledding for everybody. We had a great car, but you had to work really hard to gain every spot. At the end it was all about getting a good restart and then finding a good line to work in. We’ll happily take a podium from sixteenth.”

It’s just about time to start thinking about the points, and while Sheppard mitigated the damage, Friesen still extended his points lead.

“It doesn’t make a big difference for us with the points being that close on race night,” said Sheppard. “We go to the track, work on the car, and run the best we can. Hopefully, if we do that, the points can take care of themselves at the end.”