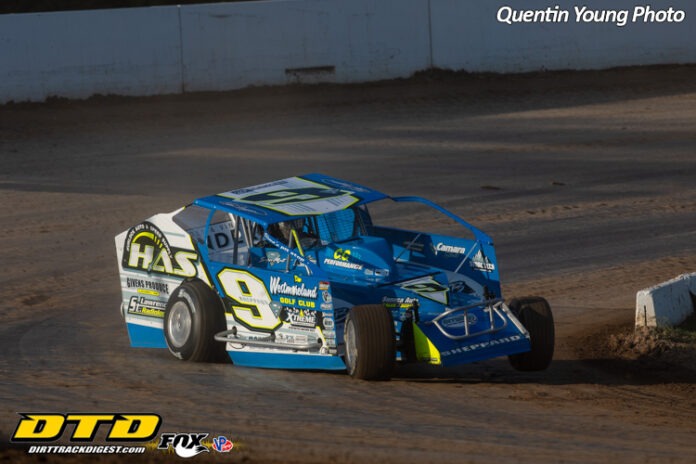 WEEDSPORT, NY – Weedsport Speedway kicked off their Cavalcade Cup weekend on Saturday night, as the Super DIRTcar Series headlined the night with the Sportsman and DIRTcar Pro Stocks completing the card. It was a sunny and warm night, as the Super DIRTcar Series ran their third race of the year at the historic 3/8ths mile. It would be ‘Super’ Matt Sheppard prevailing for his third series win of the year in dominant fashion to take night one of the weekend event, with ‘Mad’ Max McLaughlin and Tim Fuller following Sheppard home to complete the podium

McLaughlin and Stewart Friesen led the field to the green, with McLaughlin quickly jumping out to the early race lead. However, it did not take Sheppard very long to enter the battle for the lead after starting third. Sheppard quickly powered around Friesen on the first lap to move into second in hot pursuit of the No.32c. By lap 3, the top two broke away from the field, and five laps later lap 8, Sheppard took the lead and never looked back, leading the rest of the laps in dominant fashion to secure win number three on the year.

In another zip code, McLaughlin continued to hold second while the battle for the top five heated up. Tim Fuller was on the move from his 5th place starting spot to challenge Friesen for third. It took Fuller no time to reel Friesen in and then pass the No.44 to secure third for good. Erick Rudolph charged from starting 9th on the grid to finish 6th, but he was unable to get any further after being unable to pass Billy Decker for 5th.

Sheppard had an 89 point lead over Peter Britten coming into tonight, and with Britten’s 12th place finish tonight, the win is a nice boost to the lead Sheppard has built this season. McLaughlin, another tour regular, will get another boost to his points effort, as he sits less than thirty points behind Mat Williamson and Mike Mahaney in points. Mahaney just barely got into the top ten in the closing laps, and Williamson struggled deep in the field after coming through a consolation race, so all in all, tonight’s 60-lap event marked a very good points night for both.

“The win for us is that we were really good in the slick before the track rubbered”, said Sheppard post-race. “That’s been our Achilles heel all year. We were a lot better tonight, last time it got like this it was pretty bad. Getting out front before the rubber was huge. From there, it was passing the lap cars when we could, but it’s not worth forcing it.”

“It’s been one way or the other here with the track surface”, added Sheppard. “It’s been slick and rubbered in like this or been heavy with a cushion. Honestly, the track raced really good with the cushion, nothing wrong with some good old dirt track racing. Hopefully it has a bit more moisture tomorrow.”

Max McLaughlin has been strong at the ‘Port this year, but he came up just short of a win despite a strong consistent drive to bring home second.

“We’ve redrawn pretty bad here, tonight we finally drew good, but we weren’t quite good enough”, said McLaughlin. “If Sheppard started deeper in the field, it might’ve been a different story, but with the car that is the class of the field starting in third it was going to be hard. We couldn’t even pass lap cars once the rubber got put down. This place has a good track preparation crew. With the sprint cars being here tomorrow, hopefully it’ll get some more moisture and have more racing grooves overall.”