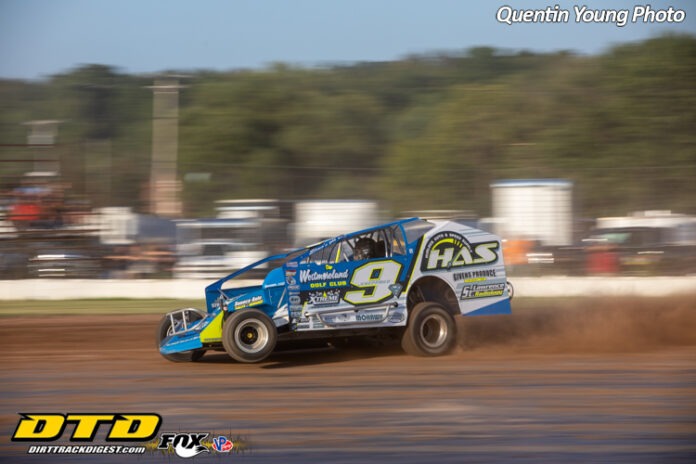 CANANDAIGUA, NY – To win at Land of Legends Raceway, oftentimes one must defeat actual living legends. Seven-time Super DIRTcar Series champion, Matt Sheppard, from Waterloo, NY, accomplished that by holding off the likes of Billy Decker and Tim Fuller to win the Gerald Haers Memorial and the $10,000 grand prize.

“You gotta have a fast race car and a really good driver to win here,” said Sheppard of his Canandaigua success. “There’s a lot of good drivers but it’s hard to put all the pieces together. Luckily for myself, I have a good race car and maybe a couple of laps around Canandaigua.”

Sheppard has nine track championships there so that was an understatement.

Finishing runner-up was Billy Decker, The Franklyn Flyer, who not only took home second-place purse and points but also scored a guaranteed starting spot in the Billy Whittaker Cars 200 at NAPA Super DIRT Week XLIX on Sunday, Oct. 10.

Another Gypsum car, this one with a #99L on the side, finished third. Lightning Larry Wight was very racy and reeling in the leaders during the second half of the race. His speed carried him far enough up the order to win the Hard Charger Award by advancing 13 positions. Wight made it as high as second but teammate Billy Decker held the advantage at the end of 100 laps.

“Our car seemed pretty versatile,” noted Wight. “We were able to get through traffic and pick up a lot of cars and make it easier as the race went on. I would have liked to see us get into lapped traffic. My car seemed more maneuverable than Billy and Matt’s in traffic. On lap 54, Matt hit traffic and I caught up to them. I think we could have made something happen there and used a car as a pick or something. I was trying everything. I scraped the wall on the front stretch just looking for whatever the track had left.”

A moving ceremony celebrating the life of Gerald Haers culminated with the Haers family giving the command, “Drivers, start your engines!”

And they enthusiastically obliged.

At that, pole-sitter Tim Fuller and outside pole-sitter Matt Sheppard brought the 29-car field to green. Fuller managed to score the holeshot but by lap three Sheppard found a fast line around the outside and stuck the move for the lead. Then the #9S took advantage of the clean air and open racetrack.

“When you are rolling around in front you gotta use the air and keep up your momentum,” said Sheppard. “When the place is like this it takes a lot of momentum. I was a little tighter than I really wanted to be. Clean air was good for me because I could drive through my push and keep up the momentum. I did struggle a bit in lapped traffic. All in all, it was a good car and a good starting spot. We did what we needed to do tonight”

After Sheppard made the pass for the lead, Billy Decker went on the attack to move into second place for himself but Fuller had other ideas. Decker dove to the bottom of three and the pair made significant contact. After that Decker had to rely on a restart to complete his pass on Fuller.

Once he did, it was time to go Sheppard-hunting. Decker spent the rest of the Feature looking for a way around the #9S. Sheppard went to the top and Decker would go to the bottom and vice versa.

“Once we got going, I knew he was there, but I couldn’t see him,” noted the seven-time Series champion, Matt Sheppard. “I didn’t know if he was on the top or bottom. The track went through some transitions. I felt comfortable, the track changed, I got into lapped traffic, felt better, then felt worse, and then the track made a final transition, and I was able to roll through the middle.”

Decker closed in on the #9S multiple times but was unable to complete a winning pass.

“Matt was leading, and he started moving around a lot looking for more speed,” said Decker. “I started going where he wasn’t because that’s the only way to get around. There were a couple of spots where I was a little better than him, but he could catch the top of two a little better. I was moving around to find something.”

Sheppard said he was tighter than he wanted to be, which made him drive an alternate line. The line culminated with a lot of speed off the top. Decker watched for Sheppard to make even the slightest mistake to pounce on.

“I thought I suffered a bit when I crossed up to the top late in the race,” said Decker. “I could do it early in the race but not so much at the end. I was just looking for something and catch him slipping and if I could catch a brown streak in two, I might have been able to have a shot. We were still a little tight and that probably hurt us just enough.”

Dave Marcuccilli had a tremendous start to his race day. First, the #M1 was second quick in his 15-car Hot Lap session. Then he went on to win the Heat Race, which paid $500 as well as the $750-to-win Dash for Cash. Unfortunately, Marcuccilli was the first caution and the first car to fail during the 100-lap contest.