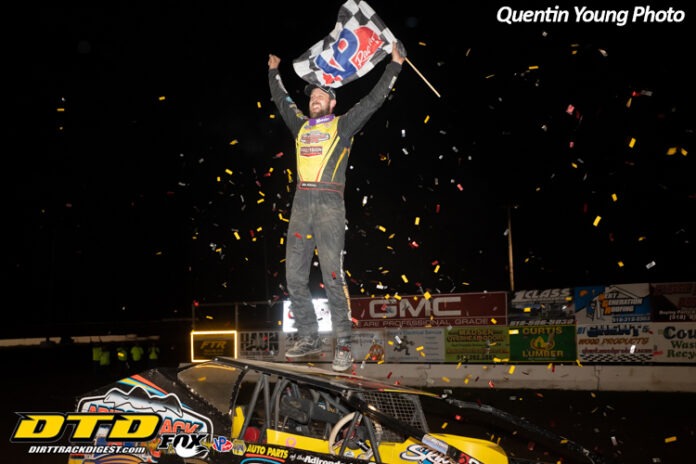 MALTA, NY – Mike Mahaney has been on the podium with the Super DIRTcar Series frequently, racking up second and third place finishes over and over. The top step of that podium has eluded Mahaney for years until tonight, where Mahaney claimed victory over Stewart Friesen in an instant classic battle in Albany-Saratoga Speedway’s 100-lap event.

Mahaney secured the lead in the first few laps of the event after a brief fight with polesitter Tim Sears Jr. As Mahaney chugged along up top, putting some distance between himself and Sears, Anthony Perrego was on the move. After starting ninth, Perrego cracked the top five early and reached third by lap 20. Up front, Mahaney was entering traffic, and his lead over Sears and Perrego shrunk drastically. On the bottom, Perrego took second from Sears on lap 29, and after working over Mahaney, took the lead on lap 39.

Friesen started 20th after taking a win in the first LCQ and was charging hard as expected. Friesen drove by Matt Sheppard for sixth on the curb on lap 43, and a few laps later, disposed of Billy Decker for fifth in the same manner. While Friesen was chasing down Ronnie Johnson for fourth, Perrego’s lead peaked at about a straightaway at the halfway point of the event. As the race seemed to calm down, Perrego seemed to be in full control, right up until a broken rear end sent him spinning into the infield on lap 69.

As leader Perrego broke, Friesen finally slipped by Johnson for what was now second place. Mahaney had a big gap over Friesen, but lapped traffic was giving Mahaney fits and Friesen began to erase the straightaway lead quite quickly. Both the traffic and Mahaney’s lead were gone for good on lap 82, as Sears slowed with a flat right front tire for a caution.

Mahaney chose the top on the restart, leaving the door wide open for Friesen to pounce. The pair traded slide jobs, with Mahaney coming out on top of that battle. Friesen wasn’t going away, trying top and bottom to gain on Mahaney. Mahaney seemed relatively committed to the cushion, moving to the middle lane in turn three to block slider attempts from Friesen on occasion.

With a handful of laps to go, Friesen made one final charge, driving in hard and throwing another slide job on Mahaney coming to the white flag. Mahaney defended, crossing under Friesen to lead at the white, and driving to the bottom in turn three to stop another slider attempt. At the finish, it was Mahaney taking his first ever Super DIRTcar Series victory, with Friesen coming home second. Sheppard crossed in third, followed by Johnson and Peter Britten.

“I don’t know how many years I’ve been running these races, but every single one of them eluded me,” Mahaney said. “I got the best team here, I’m so proud of how hard they work. We’ve been working on this so hard for the past three years and I can’t say enough. It’s awesome to get this win at my home track in front of a great crowd. I have to thank Lyle Devore for giving us a great track, it was really wet in the heats but it was the right surface for the 100 laps tonight, and it was an epic battle. To put on that show with Friesen, he’s been winning all the races, it was so cool to battle it out with him.”

Crossing the line about two-tenths behind Mahaney was Friesen, who spent a few hundred feet as the leader at various points in the latter stages.

“I was in Ronnie Johnson’s trailer borrowing springs and stuff, and we finally hit on something,” Friesen said after his +19 charge. “We finally came alive after that and got it rolling again. I’m super happy for Mahaney, he drove his balls off and I know how hard that team works. It was a great race, super exciting to be a part of. We’re going to go back, do our homework, and come out swinging for the next one.”