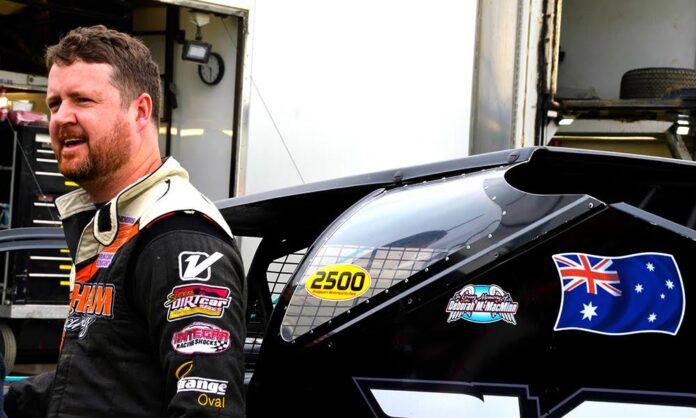 A 200-lap race around a mile-long track was hard to fathom. In Australia, the Big Block Modifieds – or V8 Dirt Modifieds, as they’re called there – tend to run 20 to 25 lap events around quarter-mile bullrings. Then, Britten made the trip across the pond and finally saw the spectacle for himself.

“When my dad was alive, he really enjoyed coming over and going to Super DIRT Week,” Britten said. “To me now, I haven’t been a New Yorker my whole life, but I’ve lived here for about 10 years now; Super DIRT Week has a very special meaning to me now.

“When I go home (to Australia), I talk about how great it is. I tell everyone, you have to come over and at least see it one time. If you’re a Sprint Car fan you have to go to the Knoxville Nationals. If you’re a Big Block fan, you’ve got to come to Oswego.”

Since making the journey to the United States and joining the Super DIRTcar Series, Britten said the interest in Super DIRT Week is “definitely growing.” Not only has more of his Australian fan base latched on it but some other Aussies have made the trip over – like Sportsman drivers Dale and Chris Corbett – further growing the interest in American Modified racing.

Like Canadian fans, Australians are unfortunately unable to make the trip to Oswego, NY this year due to the pandemic. However, with the addition of premier live DIRTVision coverage to the entire 49th NAPA Auto Parts Super DIRT Week, fans across the world can still watch Racing’s Biggest Party from wherever they are.

“We’re very excited to showcase to fans across the world that can’t be at the track the expert coverage and storytelling DIRTVision has to offer,” said DIRTVision General Manager Jim Chiappelli. “We have a lot of exciting things in store that will make them feel like they’re still a part of Racing’s Biggest Party.”

During the winter months, American and Australian fans can also watch several V8 Dirt Modified races from some of Australia’s best dirt tracks on DIRTVision, as well.

For Britten, there’s nothing like arriving at NAPA Super DIRT Week in Oswego. Flags of past champions line the streets to the track. Campers fill nearly 1,000 spots around the facility. Thousands of fans create an atmosphere throughout the week he said he doesn’t experience anywhere else.

“I really enjoy being a part of the big event the way it is,” Britten said. “I think that gets me up on the wheel a little bit more. I really hope we can get the ($50,000-to-win Billy Whittaker Cars) 200 win this year. Either way, we’ll give it our best crack and see how it all plays out.”

He came close to the prestigious victory in 2017 but had to settle for second. The next year, he found some redemption by winning the DIRTcar 358 Modified Salute the Troops 150. While still a satisfying victory, it didn’t make up for the lost 200 win from the year prior.

With a solid 2021 Super DIRTcar Series season under his belt – currently third in points with one win – Britten said he has the confidence to make another run at the historic win. It would go a long way for Britten’s career and send a ripple across the seas to Australia, further growing the allure: an Aussie was able to win the unfathomable event.

If you can’t make it to the event, you can watch the weeks’ worth of action live on DIRTVision – either online at DIRTVision.com or through the DIRTVision App.