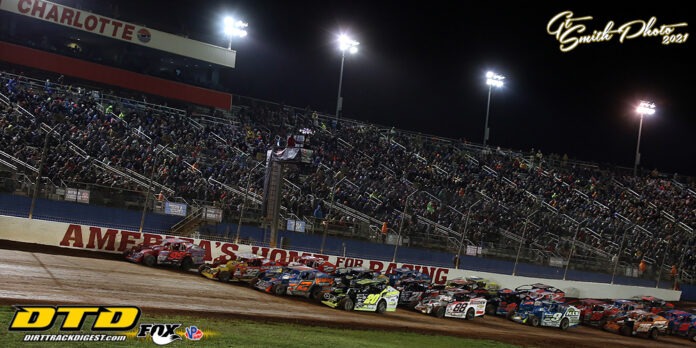 CONCORD, NC – Propelled by the momentum of its successful return to racing, the Super DIRTcar Series Big Block Modifieds are set for an elite 2022 with new ventures and familiar favorite events, including the 50th NAPA Super DIRT Week.

From Florida and Ohio, the season will then see the Series travel to New Jersey, Pennsylvania, and several tracks throughout New York — including a new three-day SummerFAST speed week with Brewerton Speedway, Fulton Speedway and Land of Legends Raceway (Aug. 16-18) — before concluding at the now four-day NGK NTK World Finals in North Carolina (Nov. 2-5).

“The 2022 season will be a big year for the Super DIRTcar Series with the historic running of the 50th NAPA Super DIRT Week, and we’re very pleased to present a schedule worthy of the year-long buildup to that event,” said DIRTcar CEO Brian Carter. “With racing in Pennsylvania and Ohio, the addition of SummerFAST and the return to several of New York’s greatest dirt tracks, we couldn’t be more excited to unleash the Big Block Modifieds for another spectacular season.”

Big Diamond Speedway (Tuesday, July 12): For the first time since 2009, the Super DIRTcar Series will return to Big Diamond Speedway in Minersville, PA. It will also mark the Series’ first time back in Pennsylvania since 2016. The Series only made three previous trips to the 3/8-mile track with Alan Johnson winning the first race in 2003, Brett Hearn winning the second in 2004 and Duane Howard winning the last in 2009. The Feature will be 75 laps and pay $7,500-to-win.

SummerFAST (Tuesday to Thursday, Aug. 16-18): The Super DIRTcar Series will be a part of the northeast’s two biggest motorsports events in 2022 with the debut of Summer FAST — a three-day event, starting with Brewerton Speedway on Tuesday, Aug. 16, then the Series’ return to Fulton Speedway on Wednesday, Aug. 17 and concluding with Land of Legends Raceway on Thursday, Aug. 18. The three races will lead into Watkins Glen International’s biggest weekend, giving race fans another ultimate motorsports week of racing before the 50th NAPA Super DIRT Week in October. Each Feature race will be 60 laps and pay $7,500-to-win.

DIRTcar Nationals (Tuesday to Saturday, Feb. 15-19): The Super DIRTcar Series will again defrost from the Northeast winter and kick off its 2022 in Florida at Volusia Speedway Park during the DIRTcar Nationals. In 2022, the Series will run for five straight nights at the half-mile track, joining the DIRTcar Late Models the first two nights and then the World of Outlaws Late Models the rest of the week. The first four Feature events will be 30-lap, $4,000-to-win races before Saturday night’s 50-lap, $5,000-to-win race, which will also crown the Big Gator champion for the Series — won by Max McLaughlin in 2021.

50th NAPA Super DIRT Week (Monday to Sunday, Oct. 3-9): Fifty years of the biggest moments and stories in Big Block Modified racing will be celebrated during the Northeast’s biggest motorsports event in 2022. Reaching a historic 50th year, NAPA Super DIRT Week at Oswego Speedway will be like no other. It’s a year-long celebration that can already be seen on SuperDIRTWeek.com with the unveiling of the 50 greatest drivers in the event’s history and will further ramp up when the week starts, featuring a plethora of activities. The main event, the $50,000-to-win Billy Whittaker Cars 200 for the Super DIRTcar Series, will be on Sunday, Oct. 9. Canadian Mat Williamson will enter as a top storyline, trying to defend his title for the third straight year.

NGK NTK World Finals (Wednesday to Saturday, Nov. 2-5): The Super DIRTcar Series will join the World of Outlaws NOS Energy Drink Sprint Cars and World of Outlaws Late Models again in North Carolina for the epic championship conclusion during the World Finals at The Dirt Track at Charlotte. However, in 2022, the event expands to four days with three nights of Feature racing action for the three premier series. That gives drivers an added day of racing around the 4/10-mile track and another chance to hoist a big check before the season ends.

In addition, as winter sets in, Super DIRTcar Series officials continue working with promoters north of the border to find dates that work for fans and competitors alike. Tickets will go on sale in the coming months.

If you can’t make it to an event in 2022, you can watch every Super DIRTcar Series events, including the 50th Super DIRT Week, live on DIRTVision – either online or through the DIRTVision App.