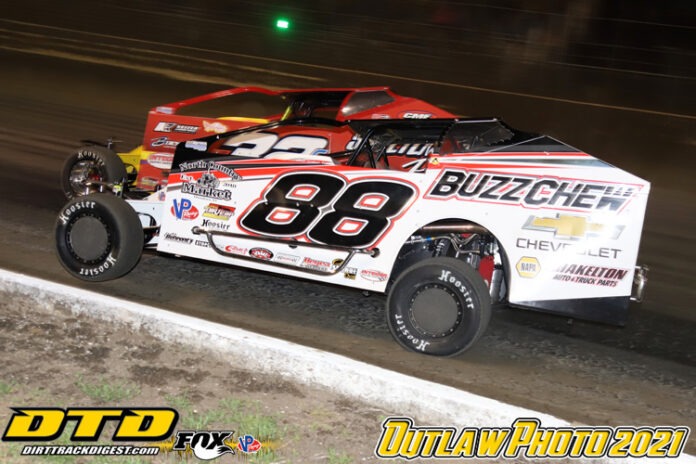 BARBERVILLE, FL – The Beasts of the Northeast have awakened from their hibernation with an appetite for gators.

Before the championship season kicks off in March, the Super DIRTcar Series will have some fun in the sun for a week’s worth of racing at Volusia Speedway Park for the 51st DIRTcar Nationals, Feb. 14-19.

Monday will be a day of practice for the nearly 40-car field of prospective entries before they battle fender to fender for the next five straight days. Each night will award the iconic golden gator trophy to the winner and points toward the overall Big Gator Championship. Tuesday through Friday will pay $4,000-to-win and Saturday will pay $5,000-to-win, meaning if fortunate enough, one driver could leave the week with more than $20,000 in their pocket.

The last driver to come closest to that feat was Larry Wight in 2020 when he won three straight nights – becoming only the second driver in the history of the Series to do so (first since 1978).

The Super DIRTcar Series will be accompanied by the DIRTcar Late Models and Xtreme Outlaw Sprint Cars on Monday and Tuesday. Then, the World of Outlaws CASE Late Models will join the Series for the remainder of the week.

Here are the top stories to follow for the week:

BIG CHAMP AFTER BIG GATOR: Matt Sheppard said he feels like he’s due for another win at Volusia Speedway Park. The eight-time and defending Super DIRTcar Series champion, of Waterloo, NY, has three DIRTcar Nationals titles and eight wins, but his last title was in 2016 and his last win was in 2019. He acknowledged his trips to the Florida track can be hit or miss, demonstrated last year by his finishes of 6th, 9th, 5th and 2nd, respectively.

However, this year, he enters the season with the momentum of having set a history-making title in 2021. He surpassed dirt Modified legend Brett Hearn for the most Super DIRTcar Series championships of all time. With that confidence propelling him into the new season, “Super Matt” may find himself making history again at the World’s Fastest Half-Mile.

MAX ON REPEAT: Max McLaughlin accomplished a feat last year at 20 years old that some veterans are still struggling to achieve. He first won a golden gator – his second career Super DIRTcar Series win – and then ended the week as the 2021 Big Gator Champion. Now, at 21 years old, with a new team and head full of confidence, the young Mooresville, NC driver has sights on a repeat.

McLaughlin rejoined Heinke-Baldwin Racing – the team that gave him his first shot in the Super DIRTcar Series – this season with the goal of earning the Series title. Feeling back at home, he spent most of his off-season in Weedsport, NY at the team’s shop preparing for the new season. Preparing to collect more trophies.

STARTING OFF RIGHT: While the five nights of racing during DIRTcar Nationals may not be points events for the Super DIRTcar Series, they’re crucial to many teams who use it as a chance to knock off the rust of the off-season and get back into a racing mentality. For drivers like Mat Williamson, Peter Britten and Jimmy Phelps, who got off to a slow start last year, it’s a chance to change that and start 2022 off on the right foot.

Of the three, Williamson is the only one with a couple of wins at Volusia – both coming in 2020. However, last year, he had an average finish of seventh at DIRTcar Nationals and didn’t get into a rhythm for the season until about the end of summer, picking up his second consecutive NAPA Super DIRT Week title and ending the year second in points.

Britten and Phelps have come close to snagging a gator trophy but have had to settle for second at best. The Aussie had the better 2021 season of the two, having captured his second career Super DIRTcar Series win, while Phelps went winless for the first time in three years. Starting off the season strong in Florida could give them the momentum needed to challenge for their first championship when the points season starts at Atomic Speedway Park, March 25-26.

FLORIDA FRIESEN: Florida speed weeks is always a busy time for Stewart Friesen, jumping between his Halmar International #44 Big Block Modified and #52 NASCAR Truck throughout the week, but he wouldn’t miss the chance to chase more golden gator trophies.

The Niagra-on-the-Lake, Ontario driver is a two-time Big Gator champion (2011, 2014) and a nine-time DIRTcar Nationals Feature winner – most recently picking up two more wins last year. His NASCAR duties Friday night will take him out of contention for the Big Gator title this year, but Friesen plans on being at Volusia every other day throughout the week.

He also enters the week with a slight advantage over the other drivers. New clay was put down on Volusia and Friesen got to make a few laps on it with a Late Model during the World of Outlaws Late Model Series’ season-opener in January.

WIGHT RETURNS: After missing DIRTcar Nationals last year, Larry Wight returns to re-stake his claim as the top gator hunter. Prior to his absence in 2021, he claimed the 2019 and 2020 Big Gator titles – adding to his 2015 title. He also won three straight races in 2020 – becoming only the second driver in Series history to accomplish that feat and the first since 1978.

The Phoenix, NY driver will have sole focus from the LJL Racing team this year as it sized down to a one-car team. With the new focus, Wight will look to put his #99L Big Block back in Victory Lane with the Series for the first time in more than a year.

A long list of drivers entered for the 2022 edition of DIRTcar Nationals has the potential to be the next new or surprise winner. Jack Lehner had a career year with the Super DIRTcar Series in 2021 and picked up his first DIRTcar Big Block win. Adam Pierson, a former Sportsman star, is in the same boat as Lehner, having earned his first Big Block win last year, too. The Vermont driver is planning a trip south as he also eyes a potential full tour with the Series. The possibilities are endless. See the full list of entries below.