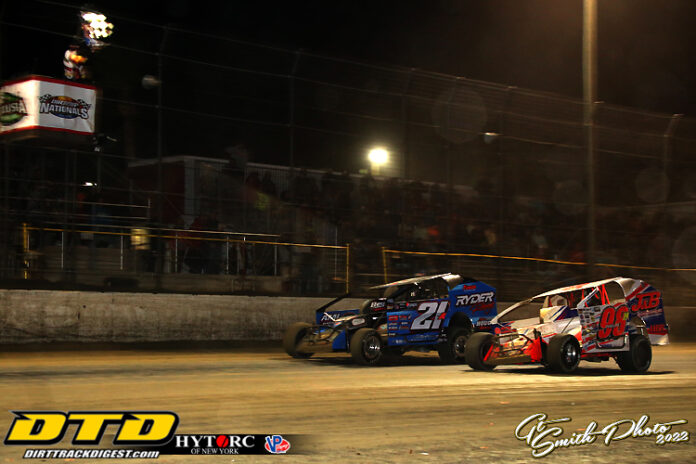 By DTD STAFF
On Tuesday night, Peter Britten finished a narrow, disappointing second after a fierce battle for the win with Stewart Friesen in the opening round of the DIRTcar Nationals for the Super DIRTcar Series big-block Modfieds.
On Wednesday night, the race was even closer, with Britten this time coming out on top by taking down Jimmy Phelps in a photo finish to win by .025 seconds at Volusia Speedway Park for a $4,000 paycheck.
“From the moment we unloaded, we’ve been fast,” stated Britten. “There’s that old saying you just have to put yourself in the hunt and something will come. While we’ve had a lot of seconds and thirds here over the years, I started to wonder if I would ever get that little baby gator. These Modified races have been really good this week, hopefully we keep it rolling and grab a couple more.”

Phelps fired first at the start of the 30-lapper, with Tuesday night’s winner Friesen in tow. With a handful of laps in, Friesen surrendered second to Jack Lehner, as Friesen found trouble on the cushion.

Caution came on lap eight as Jeff Taylor spun in between turns one and two.  On the restart Britten drove the middle to slide from fourth to second, but Lehner returned to the runner-up spot by the one-third mark.

At halfway, Phelps still showed the way, running as low as one can go around the track.

With about ten laps to go, Phelps hit lapped traffic, and had a tough time getting around the rear of the field. Lehner closed quickly, within a car length, but Lehner could not get close enough to attempt a pass.
With five laps left, the frontrunners were starting to stack up, with Britten and Kyle Coffey reeling in the top two.

As everyone logjammed on the bottom, Britten jumped up to the top with three laps to go. Britten picked off Lehner first before drawing even with Phelps coming to the white flag.

With Phelps low and Britten bouncing through the top, it was Britten beating Phelps to the line by .025 seconds to score the victory.

“I finally got something to work for me,” an elated Britten said. “I didn’t really feel like I had that good of a car at the start, bouncing too much and a bit out of control. Jimmy was really good down low, and obviously lap traffic played right into my hands, but sometimes you just have to wait it out a bit. I made an all-or-nothing move through the baja in turn one, and it payed off.”

Phelps was in the same category as Britten, many podium finishes at Volusia but a victory has been elusive. Phelps was about a bumper short of finally putting a tick in the win column.

“We weren’t making any ground on the lapped cars when I tried other lines, so I figured the bottom must have just been really good,” Phelps noted. “I figured it was best to fall in line and just make sure nobody got under me. Peter just got up on the wheel and drove his ass off, he deserved that one, but that is a tough way to lose. We just need to work on being more versatile, we were great on the bottom but just not able to move around enough.”

Lehner had some tough times on Tuesday night, but rebounded big on Wednesday. While the cameras were on the top two, Lehner finished just a few car lengths behind, very much still in contention.

“We had a great piece tonight, it wasn’t like a third place where we were just hanging on,” said Lehner. “We were able to get up there and contend there. I tried to make a run on Jimmy when he was stuck in traffic, but just timed it wrong or didn’t pick the right lane at the time. It worked out for Peter, but just didn’t work for me.”