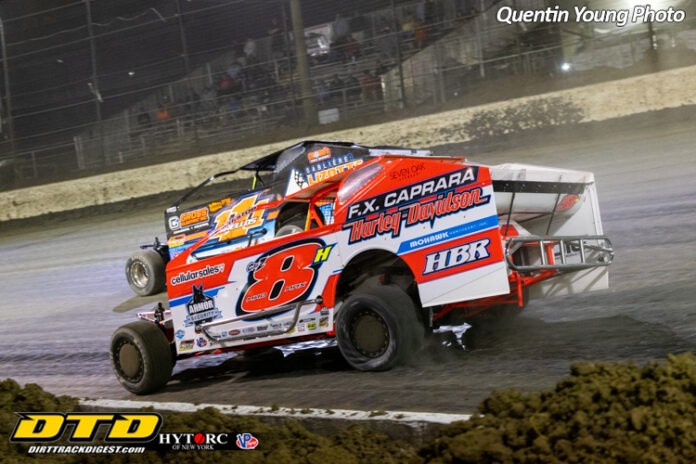 BARBERVILLE, FL –  Mad Max McLaughlin has had quite a bit of speed all week – but not much in the way of good starting spots. On Friday, he started near the front, and took advantage by taking the win. It was a great night for the HBR team, as McLaughlin had to hold off teammate Jimmy Phelps for the win.

Demetrios Drellos showed the way at the start of the 30-lap Super DIRTcar Series feature, with Mat Williamson and McLaughlin battling for second close behind. McLaughlin eventually secured second from Williamson, hawking Drellos as the race neared the one-third mark. With Drellos in the middle and McLaughlin low, McLaughlin took the lead on lap 11.

Drellos fought back, moving higher on the track and retaking the top spot. However, a lap 16 yellow didn’t play in Drellos’ favor, as McLaughlin went back to the front on the restart. Drellos then came under fire from Williamson and Jimmy Phelps, with Williamson sliding into second and Phelps third at lap 20.

McLaughlin seemed clear and free, but a yellow with six laps left reset the field. After Williamson got moved back to third after a false start, Phelps secured second with a handful of laps left. While Phelps made a late run at McLaughlin, the checkered flag was flying before Phelps could reach him. With McLaughlin winning, Phelps came home second, followed by Williamson, Larry Wight, and Marc Johnson.

“At the drop of the green, I thought I was going backwards in a hurry,” McLaughlin said. “I was so tight I couldn’t move around, but the track gained grip and our car kept getting better and better. Dale and Brandon Planck have been helping us with shocks a ton recently and I’ve learned a lot from them, and the car was super fun to drive at the end of this race. This team has been fantastic, they’ve worked so hard between the motor, backup car, and it shows with this super fast piece.”

Phelps has been consistently fast this week, and tonight wasn’t even his closest miss of a win this week. However, a Volusia win will evade Phelps for at least one more night.

“This team came down here very prepared,” Phelps noted. “We’ve had a ton of speed, I usually struggle down here, but we have a great car and I have been really comfortable behind the wheel. As much as I’d like to be standing over there, I’m really pumped for them, this whole team has been working very well together this week.”

Williamson seemed to have second on lock, but the first attempt at the lap 24 restart got Williamson moved from second to third, where he finished.

“We went with a harder tire and just didn’t fire on the restarts,” stated Williamson. “That rule where you get put back a row is kind of horseshit. They say when you get to the VP sign, you can fire, and apparently you can’t fire there.” 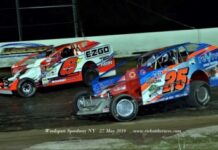