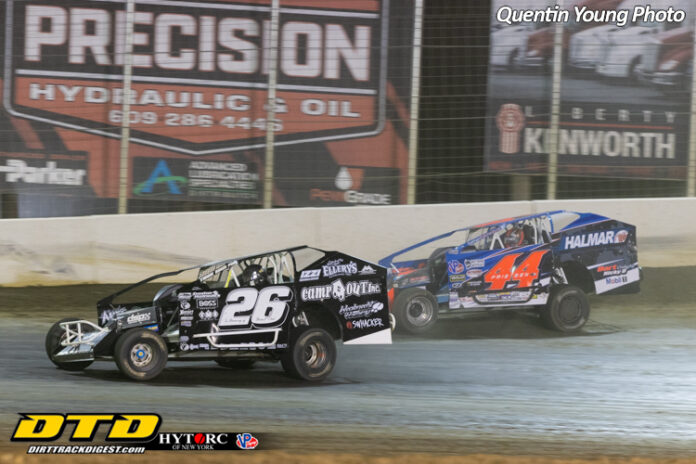 SWEDESBORO, NJ – Ryan Godown has accomplished plenty of wins throughout his career, but a Super DIRTcar Series victory eluded him for years.

However, in a 75-lap showdown Tuesday night at Bridgeport Motorsports Park in the Big Block Modified series’ lone stop this season in New Jersey, Godown’s fortune changed when the New Jersey native held off hard-charging superstar Stewart Friesen for his first Series triumph.

Godown, of Ringoes, NJ, fired from the 10th starting position, quickly working his way to the front. Once he snuck past last season’s World of Outlaws World Finals winner Alex Yankowski for the lead, it was one he wouldn’t relinquish to ultimately be crowned Bridgeport’s King of the Big Blocks and collect the $7,500 top prize.

It was far from easy, though. While the “Ringoes Rocket” was ticking off laps from the front of the field, Friesen was methodically working his way forward, finally picking off Billy Pauch Jr. and setting his sights on Godown as the laps disappeared. With both drivers trying to knock down the wall in Turns 3 and 4, Godown held off the hard-charging Friesen down the stretch, etching his name into Super DIRTcar Series history.

“I’m speechless here. It’s a little surreal,” Godown said.  “We almost got to the front too quick there at the beginning. The car was really good, then obviously the last 10 laps it kind of backed up a little bit. I didn’t know where those guys were. I saw Stew came from nowhere with two to go.

“I just had to keep focused and try to get to where he wasn’t going to go or at least protect against the slider so that’s just what we did.”

Friesen, of Sprakers, NY, thundered underneath Godown’s #26 car at the white flag, but it wasn’t enough to steal the win as Godown slid down to the bottom groove to slow Friesen’s momentum.

“Our Halmar 44 really wasn’t too great tonight,” Friesen said. “It could have been a heck of a lot better. We tried some stuff tonight starting that far back and added to the notebook…we had   a really good long-run car, but it wasn’t too good in the short run. Ryan was honestly a little bit better there at the end.”

Billy Pauch Jr. rounded out the top three, after battling Godown for the lead for much of the event.  He was contending for the win before his tires started going away.

“We don’t run many Super DIRTcar Series races, so it was a great night tonight,” said Pauch Jr. “I took a few shots at Ryan. I think I got too aggressive, and I chunked my tire. That’s when I started fading at the end.”

UP NEXT: The Super DIRTcar Series travels to Can-Am Speedway in Lafargeville, NY on Wednesday, May 18, along with the opening round of the DIRTcar Pro Stock Series.