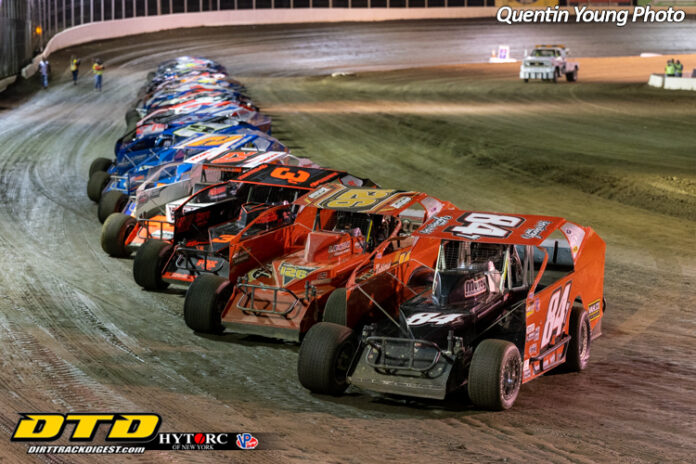 LAFARGEVILLE, NY – A trip North is on the horizon for the Super DIRTcar Series, as the Big Block Modifieds roll into Can-Am Speedway Wednesday, May 18.

The Thunder on the Thousand Islands is the only trip the Series will make to the Lafargeville, NY oval, in a 75-Lap Feature paying $7,500-to-win.


The DIRTcar Pro Stock Series will join the Big Blocks as they open their 2022 season.

The Waterloo, NY driver has found success at Can-Am, scoring two Series victories in 2009 and 2019.

He’s looking to bounce back after trouble during the season opener at Bridgeport, finishing 24th after engine troubles sidelined him.

Sheppard’s hoping to rebound after a seventh in last year’s Thunder in the Thousand Islands.

On repeat: Multi-time NAPA Super DIRT Week champion and NASCAR Truck Series star Stewart Friesen is the defending winner of the Thunder on the Thousand Islands at Can-Am.

“Mr. Freeze” hopes to keep his momentum rolling after a second-place finish at Bridgeport, narrowly losing out to winner Ryan Godown.

Keeping the momentum: Two-time Billy Whittaker Cars 200 champion Mat Williamson is another driver hoping to stay hot after a top five at Bridgeport.

The St. Catharines, ONT competitor started mid-pack in the 75-lap Feature and crossed the line fourth.

Another good run at Can-Am could have him on pace toward a second Super DIRTcar Series championship.

He’s the youngest of the 2022 Rookie Class at 17 years old, and already had his competitors turning heads when he scored a massive victory at World Finals at The Dirt Track at Charlotte.

The Covington Township, PA led the early portion of the King of the Big Blocks at Bridgeport before a hose clamp came off his car, sidelining him for the night.

While he didn’t finish the race, he’s looking to rebound and continue to show the potential he’s displayed in Series competition.

Dunn’s Early Success: Billy Dunn, of Watertown, NY, charged from eighth to victory in his DIRTcar 358-Modified during Can-Am’s season opener last week, racing past Tim Fuller in traffic for the win. Dunn and Fuller can easily be contenders to win the Super DIRTcar Series race on Wednesday night, and both racers also have some history in common: Dunn won the NAPA Super DIRT Week 200-miler at Syracuse in 2013 while Fuller took the checkers in the 2004 running of the event.

AROUND THE TURN: The Super DIRTcar Series will make its second New York stop at Weedsport Speedway for the Heroes Remembered 100 on Sunday, May 29, followed by a Memorial Day special at Lebanon Valley Speedway on Monday, May 30.