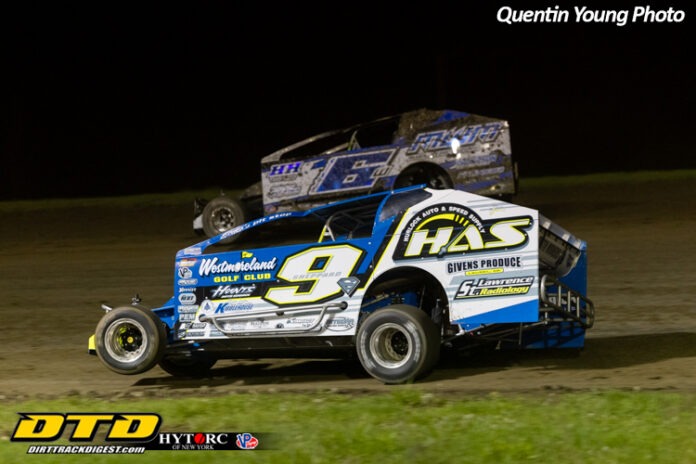 LAFARGEVILLE, NY – Matt Sheppard had his way with the Super DIRTcar Series field at Can-Am Speedway on Wednesday night in the Thunder on the 1000 Islands feature. Sheppard started on pole for the 75-lap feature, then went on what appeared to be a relaxing evening drive en route to his 75th career Super DIRTcar Series win.

“We’ve made some good decisions with our cars lately, and unloaded with a really nice piece tonight,” Sheppard noted. “Lady Luck was on our side tonight, too, starting on pole and no yellows to bunch us back up. It allowed us to build up a little bit of a lead, so if I got struggling in traffic a little, I had a buffer.”

After picking the outside during the initial start, Sheppard quickly put some distance between himself and Jimmy Phelps during the early stages of the race. Sheppard held a comfortable lead for quite some time, but as Sheppard worked through the first pack of lapped cars, Phelps closed in. By lap 20, Phelps was starting to search for a possible way by Sheppard. However, Sheppard got through some traffic quite well, and Phelps lost touch.

After starting eighth, Stewart Friesen slowly picked his way forward. Friesen cracked the top five relatively early, but needed to do some serious work to get by Mat Williamson. Eventually, Friesen got to third on lap 25, with Tim Fuller close in tow. While Williamson and Fuller battled for fourth, Friesen drove off after Phelps.

It took Friesen a fair amount of time to reel in Phelps, and all the meanwhile, Sheppard was pulling away. Friesen completed the pass for second just prior to the lap 50 mark, but Sheppard was a small dot in the distance.

The battle for third through fifth heated up in the late stages. Fuller made a late charge, driving by Williamson and then Phelps with ten laps left. As fast as Fuller looked towards the end of the race, Max McLaughin was on a stronger charge. McLaughlin started 18th, taking Williamson and Phelps three wide to jump to fourth with a handful of laps remaining, running out of time to reach Fuller.

While that was going on, Sheppard was long gone, a straightaway and some in front of Friesen. With the checkered flag waiving at the end of 75 caution-free laps, it was Sheppard scoring his first Super DIRTcar Series win of the season.

“The track did some interesting things tonight, there were times I felt really good, then not so good, and it would come back to me,” stated Sheppard.  “We’ve been on a bit of a hot streak, four wins in a row, so we just need to keep working.”

Sheppard wasn’t the only one to note some changes and fluctuations with his car during the race, runner-up Friesen had some different struggles.

“I’m not sure a caution would’ve helped me,” stated Friesen. “I would’ve liked one to see if we had anything, but I got a little too hard on the tire. It felt like the harder I beat on it, the worse it felt, and the last couple of laps I was just sort of floating. Two seconds in two nights, just need to keep marching on.”

The first Can-Am regular across the line was Fuller in third. Fuller slipped up on the initial start and lost some ground, and spent the duration of the race playing catch-up.

“I screwed up on the first lap,” Fuller said. “I tried to blast the top and got too much. I lost a bunch of guys, got behind Friesen, finally landed about eighth or ninth and that put us behind right away.”