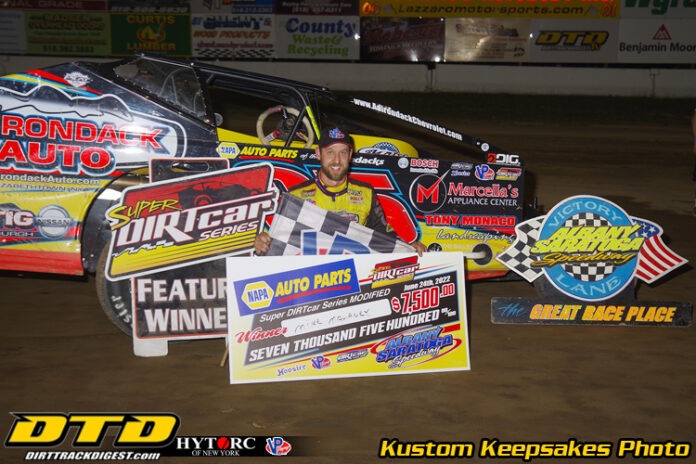 Despite suffering a left front flat after a skirmish with the inside Jersey barrier in the first half of the race, Mahaney held off Marc Johnson to win Friday night’s 71-lap Super DIRTcar Series race at Albany-Saratoga Speedway.

Mahaney, who drew the pole for the feature, earned $7,500 for car owner George Huttig with the second Super DIRTcar Series win of his career. He chalked up his first win in the season-ending 100-lap SDS race during Malta Massive Weekend last September.

It’s not certain when Mahaney clipped the inside barrier, because it didn’t become apparent that he had a flat tire until a caution came out on lap 37, when Jeremy Pitts, who was running third at the time, suffered a mechanical failure. So, Mahaney probably ran at least half of the feature on three tires.

“I don’t think DIRT has a rule about that (racing with a flat tire),” Mahaney said after the race. “I was more concerned that it was going to come off the rim. But at least the rubber stayed on, and I could still handle it.

“I just had to make sure I didn’t get into the barrier again. That’s how I did it, trying to get as close as I could to it to keep up with Marc.”

Johnson, who started on the outside pole, led the first eight laps, choosing to run the outside. But Mahaney got a good run coming out of the second turn on lap nine and had the lead when they passed under DIRTcar flagger Dave Farney.

Jessey Mueller, who started sixth, moved up to third by lap 12 and had a front-row seat for the battle between Mahaney and Johnson as they began to work their way through lapped traffic by lap 16. But Mueller then lost the No. 3 spot to Pitts on lap 28.

Mahaney began to get some breathing room until Pitts brought out another yellow on lap 37. That put Johnson right next to Mahaney for the restart, and moved Mueller back to third.

On the restart, Mueller immediately went to the top, and rocketed by Johnson for second coming out of the second turn on lap 44.

But Mueller couldn’t gain any ground on Mahaney, despite that flat left front tire. And the flat tire didn’t seem to giving Mahaney too much trouble when he began to get into lapped cars again on lap 52.

The lapped cars also worked in Johnson’s favor, as he was able to catch up with Mueller and then regained the No. 2 position on lap 62. But by that time, Mahaney had a half-a-straightaway lead, and easily got his second consecutive Super DIRTcar Series win at Malta, with Johnson more than three seconds back in second, and Mueller third.

“I was surprised that Marc wanted to run the top because usually, he runs the bottom,” said Mahaney. “But tonight, he had a good pace on top, and I had to work hard. We had a great car to run here tonight.”

Mueller said he thought he was going to come away with a win once he moved up to second.

“I thought I was going to roll right by him (Mahaney),” he said. “I probably should have tried the bottom, but I had too good a position to give up. I don’t think the top went away. I just think the bottom came in for some of those guys.”

Matt Sheppard, the winningest driver in the Northeast this season, drew the 11th starting position and was never a factor, finishing 10th.

David Boisclair chalked up his first career Northeast Paving & Sealcoat Sportsman victory, using a late charge to come away with the win in the 25-lap feature.

Mike Coffey Jr., who started second, led the majority of the feature, but Boisclair, who started eighth, was running side-by-side with Coffey Jr. with five laps to go.

Boiscialr then got under Coffey between the first and second turns to get the lead on lap 21. Two laps later, Zach Buff brought out the final caution when he slowed on the track, but Boisclair got a good jump on the restart, as did Dylan Madsen, who passed Coffey for second.

Defending track champion Chad Jeseo continued to dominate the Eastwood Detailing Pro Stock division, recording his fourth win of the season in Friday night’s 25-lap feature. But this one came a little differently, as he was involved in a four-car tangle on lap six, and had to go the rear of the field.

Jeseo worked his way back to fourth by lap 19, when a yellow bunched the field behind leader Rich Crane, who had started on the outside pole.

Scott Towslee got his nose in front of Crane to complete lap 19, taking over the lead, but another restart three laps later allowed Jeseo to move into second. Then, he got a big run coming out of the second turn to get the lead on lap 22, and he beat Towslee to the finish line by 0.830 seconds.

They were followed by Jason Casey, Crane and points leader Rob Yetman.

The Haun Welding Limited Sportsman ran for $500 to win in the Kevin McMillan Memorial, and Dan Sequin held off Phil Arnold to record his first career win in the 20-lap feature.

Seguin, who started third, got the lead on lap two and stayed out front the rest of the way, but Arnold was never far behind. Sequin then had to survive a one-lap shootout after John Santolin spun on the white flag lap.