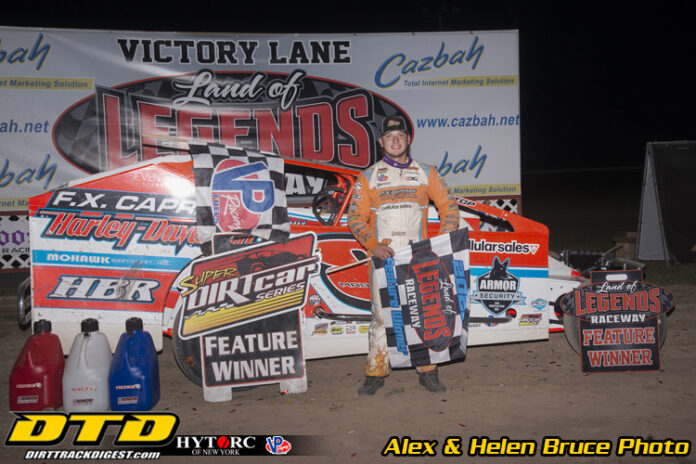 CANANDAIGUA, NY – Max McLaughlin exited his Big Block Modified and banged on the roof before enthusiastically jumping to the ground to celebrate with his crew members liked he just won his first race.

After passing Justin Haers for the lead on Lap 73 of 76 during the Stars and Stripes 76 at Land of Legends Raceway, McLaughlin went on to win his first points-paying Super DIRTcar Series race – he’d already won three non-points Series races.

McLaughlin’s #8H machine ran solid during Qualifying and his Heat Race, placing third in each. He pulled the sixth position during the redraw, giving him a more than reasonable chance to chase the win.

Once the green flag dropped, he quickly moved himself into fourth position by Lap 4, which would be where he stayed for the next 30 Laps. But McLaughlin was not phased and stayed the course.

He made it into second place by Lap 40, but leader Haers was not yet within striking distance. Haers was an entire straightaway ahead at many points. However, fate would intervene, and a caution was thrown on Lap 45 after the #14J of Alan Johnson suffered a flat right rear tire.

On the restart, Haers and McLaughlin lined up in the front row. The #3H of Haers made it known he was not going to have the lead taken from him easily, bolting out to a quick lead. But just when onlookers may have thought the race was over, McLaughlin let them know they were wrong. He passed the night’s dominant leader in what seemed like an instantaneous move.

“He faded a little bit, and we just didn’t fade,” McLaughlin said. “It looked like he tried to protect the bottom. He was kind of the only person on the top. I was able to work the top, too. He probably just didn’t think anybody was able to roll, trying to protect the bottom. I was just able to hit a roll around him just a tiny bit, clear him on the back stretch, but props to him for racing me clean.”

Haers would not fade any more than one position, crossing the line second.

“I felt like the longer the race went on, I was kind of struggling off of Turn 2 and I just couldn’t pick the gas back up as quick as I was earlier in the race,” Haers said.

“I knew it kind of left me in a spot where I was struggling a little bit because I felt really good through (Turn) three and four and I didn’t think anyone would be able to pass me there. You got the lapped traffic, and they were kind of killing my momentum a little bit. And his car was better in one and two…that’s the bottom line.”

Third place finisher Matt Sheppard drew 11th in the redraw after edging out the #215P of Adam Pierson in incredible fashion on the last turn of their Heat Race, showing why he is an eight-time Super DIRTcar Series champion, currently in the hunt for number nine.

Sheppard made do with the hand he had been dealt, charging his way into contention one position at a time. A five-time career winner at the track, he was well versed in what it would take to do so.

“Thankfully, I got a lot of laps around this place, so I can kind of feel my way around in the dark,” Sheppard said.

“It was definitely dusty. The track conditions have been a little bit of a struggle here all year when I’ve been here…we had a good race car tonight, a lot of experience around this place. I just kind of knew where to go. When the car wasn’t working in one spot, I knew kind of how to move it around.”

With the third-place finish, Matt Sheppard became the new Super DIRTcar Series points leader – now four points ahead McLaughlin, who moved up to second. Mat Williamson, the points leader coming into the race, finished 20th, dropping him to third.

UP NEXT: The Super DIRTcar Series travels to the Keystone State for the first time this season, competing at Big Diamond Speedway in Pottsville, PA on July 12 and then at Bloomsburg Fairgrounds Raceway in Bloomsburg, PA on July 13.

If you can’t make it to the tracks, you can watch all the action live on DIRTVision – either online or by downloading the DIRTVision App.