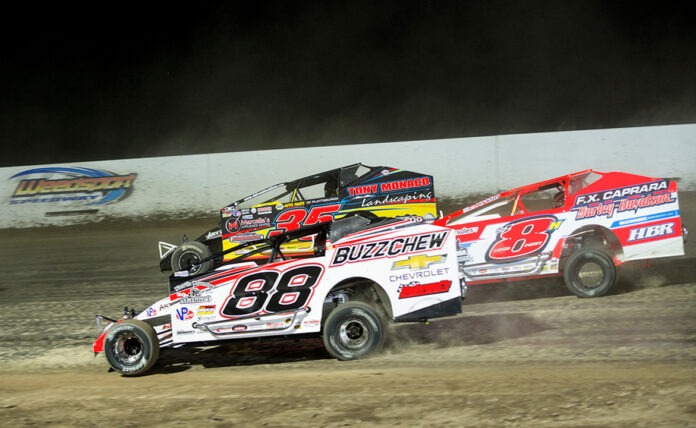 WEEDSPORT, NY – The Super DIRTcar Series returns to Weedsport Speedway for the second time this season with the chance for one driver to claim a guaranteed starting spot in the 50th Running of NAPA Super DIRT Week.

Currently, LJ Lombardo is the only driver to have claimed a NAPA Super DIRT Week guaranteed starting spot with his win at Lebanon Valley Speedway. If he wins the Hall of Fame 100, the driver who finishes second will then be awarded the latest guaranteed stop, meaning a new driver will leave Weedsport with the prestigious honor no matter what.

Notables: The last two times the Super DIRTcar Series visited Weedsport, Stewart Friesen found himself on top of Victory Lane hill – mostly recent in May, picking up his fourth Series win at the track. If he can win the Hall of Fame 100 he’ll become the first driver in Series history to win three straight Series races at Weedsport.

Before his dominance, 2019 Series champion Mat Williamson (in 2021) and Max McLaughlin (in 2020) each picked up their first Series Weedsport victory. In May, they  managed top-10 finishes in ninth and sixth respectively. The event will be a home race for McLaughlin, who has spent a lot of his time in Weedsport, NY, and drives for Heinke-Baldwin Racing – located at the entrance of the speedway.

Eight-time and defending Series champion Matt Sheppard, of Waterloo, NY, has the most Series wins of all active drivers at Weedsport with nine. Three wins behind him is three-time Series champion Billy Decker, of Unadilla, NY, who is in his 33rd year of running with the Series.

Other Series winner who will be looking for their first win at the state-of-the-art track will be drivers like Peter Britten, Alex Yankowski and Anthony Perrego.