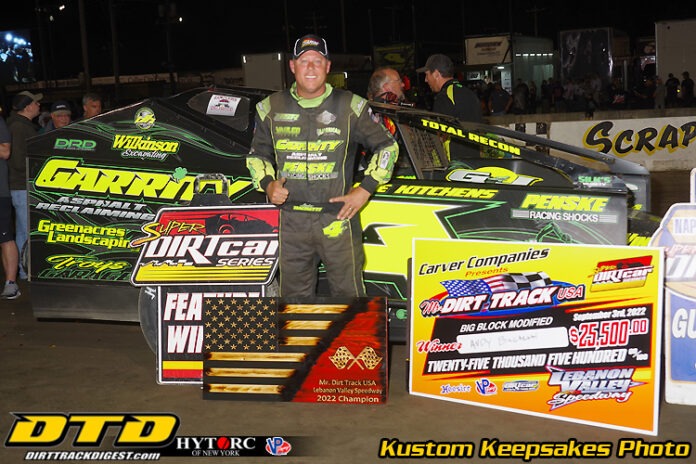 WEST LEBANON, NY – After holding the title of Mr. DIRT Track USA for a year, Andy Bachetti made it clear he wasn’t ready to give it up Saturday night at Lebanon Valley Speedway.

The Super DIRTcar Series made its second and final trip of the year to the West Lebanon, NY track for the prestigious $25,500-to-win Mr. DIRT Track USA.

Bachetti, of Sheffield, MA, entered as the defending winner and 2022 Lebanon Valley Speedway track champion. He put that experience of the 5/8-mile track to good use early on, claiming the Billy Whittaker Cars and Trux Fast Time Award and then won his Heat Race.

After drawing the eighth starting spot in the 100-lap Feature, Bachetti didn’t waste time maneuvering his way through the field. He took the lead on Lap 42 after passing Peter Britten.

While he was in the lead on familiar territory, he couldn’t go on cruise control yet for the final 58 laps.

“We actually had to race pretty hard there for a while which I really didn’t want to do,” Bachetti said. “I think it was the right call but at the end of the day, I didn’t think we’d have to race that hard. I had to get out there and just save tires and conserve.”

Not long after Bachetti got by Britten for the lead, Keith Flach also found his way around the Australian for second. Britten continued to fade and had to replace a right-rear tire later on in the race – eventually having to settle for a ninth-place finish.

The race was almost three-quarters of the way finished before the first caution came. Flach and Billy Decker lined up behind the leader for a restart on Lap 72, hoping to find an opening.

“I was just trying to run my own deal there at that point with the longer run there,” Flach said. “Like I said, I didn’t even know [Bachetti] was the leader at that point and I was just kind of focused on riding around. I saw him, then we passed Peter there at one point before we got to Andy. I was just trying to run my race and wheel him in. We started to catch him, then we were just trying to move around and see what would work better, what wouldn’t work. We got within a few of him and then the yellow would come out. I think that helped cool his tires and stuff. I think that might have hurt us a little bit but that’s the way it goes.”

Brett Haas, a weekly competitor at the track, also put on a show for his local fans. After starting 15th, the Pittsfield, MA driver raced his way into the top-five by the first caution and continued to gain ground from there, eventually settling for a third-place finish.

UP NEXT: The Super DIRTcar Series returns to Weedsport Speedway for the Cavalcade Weekend, Sept. 10-11, with another 50th NAPA Super DIRT Week guaranteed starting spot on the line. For tickets, CLICK HERE.