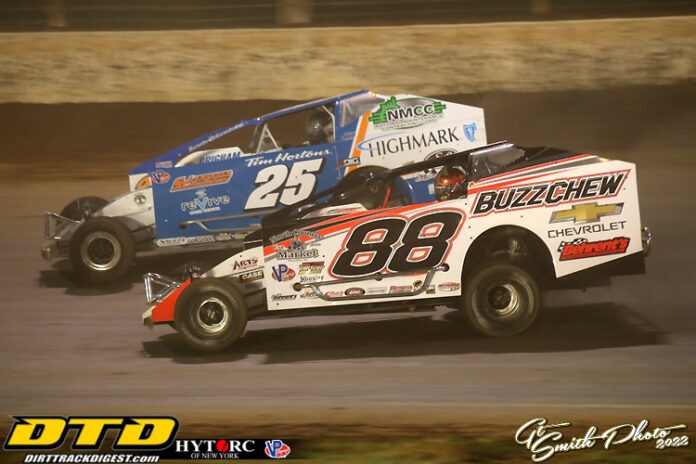 CONCORD, NC – Most drivers would love to have the type of success Mat Williamson’s had this season. It just hasn’t met his lofty expectations.

Sure, Williamson has his share of wins, especially in the 358 Modified ranks. But in Super DirtCar Series Big Block competition, the Canadian driver only had one win in 16 starts coming into this year’s World Finals.

There was just something missing. Well, apparently, Williamson found it a week ago when he collected the victory at Georgetown Speedway and carried it over to the slick surface at The Dirt Track at Charlotte.

Williamson won a tight battle with Erick Rudolph and drove away to a dominating victory in the 30-Lap main event. His second win of the SDS series season added $10,000 to the team’s bank account. 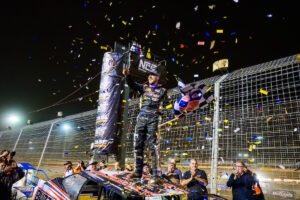 “We had a very good car,” Williamson said. “We’ve been working on stuff since Georgetown that we kind of learned down there with the Behrent car and transferred it over to this thing, and we were pretty fast.

“When Erick got by Anthony [Perrego], I didn’t think I was going to be able to get back by him, because I showed him the bottom. Then, I tried one lap at the top of one and two — not the top but rolled the middle — and I got such a good run on him and thought we could make that work, too.

Anthony Perrego started on the pole and beat Rudolph through the first two corners to lead the first circuit. Williamson fell into third, with Matt Sheppard sitting in the fourth position. 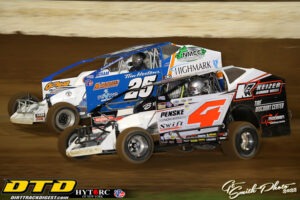 Sheppard started to challenge Williamson for position on Lap 4 on the low side of the second corner. The move didn’t work, and he fell back in line.

As for Williamson, he kicked it into high gear. He tracked down Rudolph for second and made the pass in Turns 3 and 4 on Lap 8, but Brett Hearn spun in the first and second corner to negate the move.

Perrego chose the outside on the double-file restart, but Rudolph won the sprint into Turn 1. Like Williamson’s pass, this one also didn’t count, as a tire rolled down the frontstretch to bring out the caution.

On the second attempt to restart the event, Perrego chose the bottom. Rudolph, again, surged ahead to take the lead through Turns 1 and 2. This time, it stuck, and Perrego was left to deal with Williamson for second.

Williamson continued to pick up speed. He shot to the bottom to pull even with Perrego in Turns 1 and 2. At the other end of the speedway, Williamson rode the outside to finish off the pass for the runner-up spot.

Rudolph was setting a pretty good pace, but that didn’t stop Williamson from cutting his lead down to .292 seconds by the halfway point. Three laps later, he got beside Rudolph in Turn 2, only to have the leader ride the high side to a .188-second lead at the stripe.

It was only a matter of time. Williamson cut the lead to .034 seconds on Lap 19 before splitting Rudolph and the lapped car of Paul St. Sauveur coming out of the fourth corner to complete the 20th circuit.

“I was worried about the tire, because it kind of latched up and got pretty fast through the middle,” Williamson said. “I was worried that we were going to wear the tire out, but fortunately, the track crew did a good job, and we didn’t get much tire wear.

“I knew we were good, but obviously, Matt and Erick are really good racecar drivers, and it was good racing with Erick for the lead. We raced a lot together at Ransomville, and it’s cool that we can do it on the big stage here.”

Once out front, Williamson dismantled the field. He knifed through traffic with ease and opened up a 2.064-second lead over Rudolph.

Sheppard was searching in the first and second corner and finally cleared Perrego for third. He chased down Rudolph for second, but he didn’t have enough time to make a move for position or track down the leader.

At the checker, it was all Williamson by 4.662 seconds. In doing so, he earned his 30th Super DirtCar Series win and second at The Dirt Track at Charlotte. 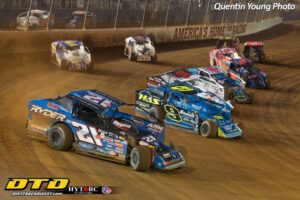 “At the end of the year, I always get rolling, and I know we’ve got a long Winter ahead of us,” Williamson chuckled. “I’ve got to make some money before we go into the Winter, because this is all I do.

“I’m just really appreciative of these guys. I mean, it’s a cool way to end the year. Hopefully, we can get two more before the end of the week.”

Rudolph held off the charging Sheppard by .259 seconds at the stripe. Perrego settled into fourth in the final rundown, and Demetrios Drellos completed the top five.

“He [Williamson] had a really good long-run car,” Rudolph said. “We were kind of just running our line, running our line, and he nosed in there, and I tried to run a little bit lower. He just had a superior car tonight, and once he got by me, he put a pretty good gap on us.

“A podium finish here, anywhere in Modified racing, is tough. There’s a lot of great competitors, great cars, and anytime you are on the podium, you’re doing something right, and we were good tonight. We time trialed good, did what we had to do in the heat race, and then we had a good redraw.

“We tweaked on it a little bit, and we were right there and put ourselves in contention. Sometimes, that’s all you can do.” 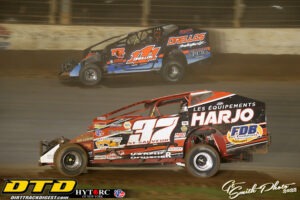