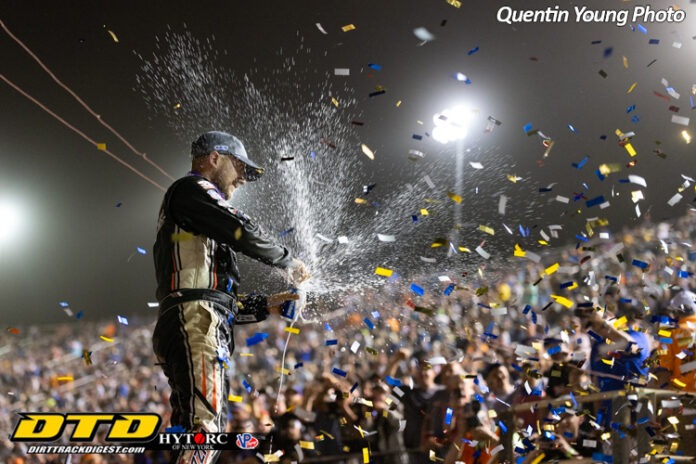 CONCORD, NC – Mat Williamson closed the World of Outlaws World Finals at The Dirt Track at Charlotte the same way he opened it – winning.

The St. Catharines, ON driver gave his Canadian fans something to cheer for again Saturday night when he outdueled Max McLaughlin and Demetrios Drellos for the $15,000 victory – his third of the season.

And after Williamson celebrated his victory, Matt Sheppard later took to the stage to officially be crowned the 2022 Super DIRTcar Series champion – the Waterloo, NY driver’s ninth title.

For Saturday night’s Feature, the last race of the season for the Super DIRTcar Series, Williamson had his work cut out for him starting eighth on the grid.

He slowly chipped away at the pack, moving himself up to fourth position by the halfway point of the 40-lap matchup. Pole starter Erick Rudolph was still leading the way, with Billy Decker in second and Max McLaughlin in third.

Williamson then unleashed a second wind of speed, moving himself into second place by Lap 27 after passing Rudolph. He then locked into a battle with McLaughlin who had taken the lead by that point. With three laps remaining, he decided to take a risk.

However, the risk ended up being for nothing when the caution flew before the lap was completed, putting Williamson back to second. When the race resumed, though, Williamson threw his car to the outside of McLaughlin into the first corner and then powered around the #8H for the lead. And this time, he kept it.

“We unloaded a backup car that was the same if not better than the primary,” Williamson said. “It just goes to show you how good Billy the Kid is, Spot, Ernie, and all the guys that work on this thing. They got it so that it was dialed in…we unloaded it here without hesitation and we dialed her in and got the “W.”

McLaughlin held on to cross the finish line in second, his first podium finish of the World Finals.

“I didn’t know where he [Williamson] was running in one and two,” McLaughlin said. “I ran the bottom on (Turns) one and two and he never showed the outside and he said Drellos showed him a nose on the outside before the last caution and that’s where he ran.”

“I knew we were going by Max that next turn when that caution came out,” Drellos said. “I had the move all set up for him. We were by Mat. It was just one of those things where that caution came out and I showed Mat my hand and I showed him exactly what we were going to do that next turn. He did exactly what I was going to do and went right by Max.”

Anthony Perrego came in fourth and Alex Payne rounded out the top five.