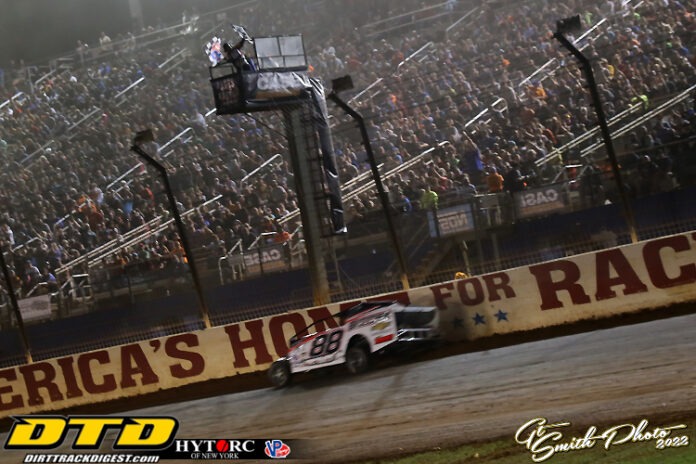 CONCORD, NC – The World of Outlaws World Finals format has been enhanced this year for fans to see all three series on all four days of the event when all dirt roads lead to The Dirt Track at Charlotte on Nov. 1-4.

Continuing to feature the World of Outlaws NOS Energy Drink Sprint Car Series, World of Outlaws CASE Construction Equipment Late Models and Super DIRTcar Series Big Block Modifieds, the 2023 edition of World Finals will see Qualifying (for Thursday and Friday’s programs) for the three series completed on Wednesday and then full race programs for each series Thursday through Saturday – like last year, points earned throughout the week will set the lineups for Saturday’s Heat Races.

It all culminates to the electrifying championship finale on Saturday where the 2023 champion will be crowned from each series at the end of the night.

“Expanding the World of Outlaws World Finals into a four-day show last year proved to be a success, giving fans an extra day of exciting racing and another chance to meet the drivers, but we realized to enhance that experience we wanted to give fans a chance to see all three series every night,” said Jeff Hachmann, World Racing Group executive director of events. “Now, the championship storylines will build all four nights for each series.”

Wednesday will be all about speed. The Low-E Insulation Qualifying rounds for the Sprint Cars, Late Models and Big Block Modifieds will showcase the fastest laps of the week as drivers will be keen to find every ounce of speed their car has, pushing every component to its limit. Where they line up could not only determine their chance to win, but also their chance for a title.

Fans will then be treated to full race programs — minus qualifying — the rest of the week for all three series. Opening ceremonies are scheduled for 5pm (ET) on Thursday and Friday and 3pm (ET) on Saturday.

Saturday’s event will also feature the flag ceremony and fan-favorite 3X4 Wide Salute to the Fans with cars in all three series on the track at the same time.

“The World of Outlaws World Finals has grown to be one of the biggest events in Charlotte, and by expanding it to four days with more on track action and more fan activities, we continue to establish the event as one of the most marquee attractions in motorsports,” said Eric Singhaus, Charlotte Motor Speedway event manager. “I’m excited for fans to experience the new format this year and get to see all three Series every night.”