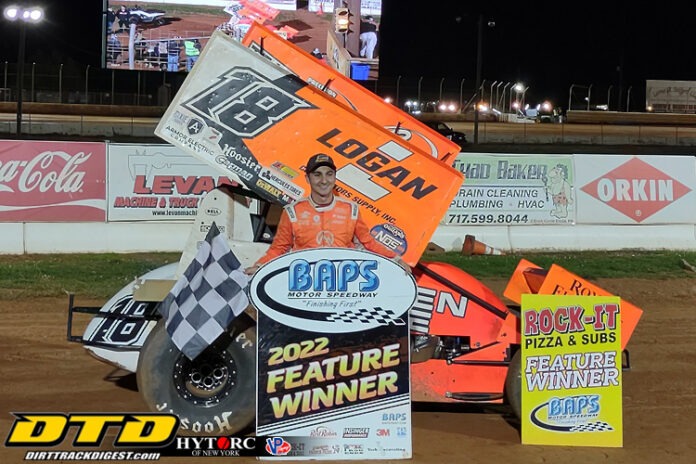 YORK HAVEN, PA – Gio Scelzi surged in the closing stages of the 30-lap feature event on Friday night to claim victory in “The Night Before” at the BAPS Motor Speedway.

Danny Dietrich and Justin Peck led the field to the green flag with Dietrich grabbing the early advantage in the 30-lap main event.

As Dietrich worked on extending his lead, the 39 on Anthony Macri was making his presence felt, working his way past Ryan Smith for third just 6 laps into the feature.

The race leader found his way into lapped traffic just 7 laps into the feature which allowed Justin Peck to close right in on Dietrich as the two made their way through the slower cars.

As Dietrich and Peck battled through lapped traffic as the race came to a close, Dietrich lost control of his 48 machine in turn 4 and spun with just 4 laps remaining.  Luckily for Dietrich he never lost momentum even though the yellow flag flew, allowing him to blend in with the field in the 2nd position.

Dietrich’s good luck ran out as the field came to the restart and the 48 spun in front of the field, resulting in a massive pileup and Dietrich on his roof.

After the cleanup as the field came to the green flag Gio Scelzi wasted little time moving to the bottom of turn 1, sliding to the top in turn 2 to take the lead with just 3 laps remaining.

Gio then cruised to a $6,000 victory over Peck who came home in second, Ryan Smith third, Anthony Macri fourth and Kyle Reinhardt completing the top five.