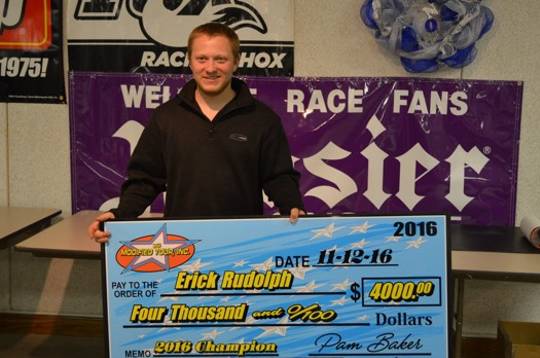 Hartford, OH, – Sharon Speedway brought down the curtain on the 87th anniversary racing season as the two-day “Apple Festival Nationals” was cut short by rain Saturday night. Despite a near 100% chance of thunderstorms in the forecast all day and night, the track was able to withstand some light showers throughout the day and dodge the heavy storms to get started on time. Two feature events were completed with Erick Rudolph (“Russ King Memorial” Big-Block Modified Tour, Inc.) and Will Thomas III (RUSH Late Model Tour) celebrating in the Hovis Auto & Truck Supply victory lane before rain washed out the remainder of the program. The remaining feature events will be completed throughout the spring of 2017 with the dates to be announced in the offseason.

Eric Rudolph won the 2015 “Russ King Memorial” part of the “Apple Festival Nationals”, which was actually made up back on April 16. On Saturday night, the Modified Tour, Inc. point leader started back in 10th, but that only delayed the inevitable as he made the winning pass on lap 21 and went on to win the 32-lap rain-shortened event, worth $3,000.

After drawing the pole position, J.R. McGinley jumped to the early lead over Skip Moore. Seventh starting Rex King, a three-time winner of his father’s memorial event, moved to third on lap 10 getting by Dave Murdick then took over second from Moore on lap 14 as Rich Richner and Rudolph followed in third and fourth.

Rudolph then snatched runner-up away from King on lap 20 before making the winning move one lap later following a restart as King followed past McGinley. Rudolph would then drive away from the field until two-time track champion, Rex King, Jr., brought out the event’s final caution with 32 laps scored as his bid once again ended to win his first memorial event for his grandfather. At this point the intensity of the rain picked up and the cars were sent off the track. Too much rain would fall ending the event and the night. The race was considered complete as it was past the halfway point of the scheduled 35-lap distance.

Rudolph became the eighth driver to score multiple “Russ King Memorial” wins in the 31st running of the event driving the Randy Chrysler-owned #25R. King was second. After coming up a close second to Kyle Fink on Friday night in the Big-Block Modified non-winners event, McGinley, who has little Sharon experience, completed an excellent weekend in third after leading the first 20 circuits.