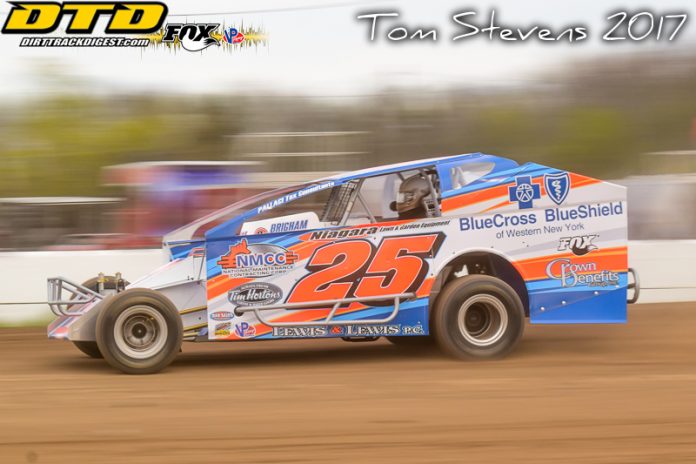 BUSTI, NY – Some of the best open wheel racing in the area was on full display Saturday as Stateline Speedway hosted Open Wheel Mania at the Busti one-third mile dirt oval.
The Patriot Sprints Tour visited the track for the first of two times this season and the BRP Big Block Modifieds and Thunder on Dirt Vintage Modified Series also made appearances. Three of Stateline’s weekly series were also in attendance as the Sugar Grove Beverage Outlaw E-Mods, Rusted Nutz RUSH Pro-Mods and Super Sportsmen series competed in non-points events.

Jared Zimbardi made the Open Wheel Mania event one to remember, crusing to victory in the Patriots Sprint Tour Event. Zimbardi got a solid jump from pole and never looked back, leading wire-to-wire to claim the win.

In other action, Erick Rudolph was victorious in the BRP Big Block Modifieds 35-lap, $2,500-to-win feature. Les Myers won the Modifieds division of the Thunder on Dirt Vintage Racing Series feature while son Brian Myers was the winner in the Sportsmen class. Dennis Lunger won for the seventh time in seven starts in the Pro-Mods series, Joel Watson was victorious for the second straight week in the Outlaw E-Mods feature and Jim Kibbe returned to victory lane in the Super Sportsmen class.

Fans in attendance were also treated to a five-lap exhibition race from four retired drivers who are among the best to ever race at Stateline Speedway. Dick Barton was able to jump out to an early lead and hold off Rod Maloy for the win in a race that also feaured Lars Huling and Dale Clark.

Zimbardi and Jordan Thomas led the field to the green in the Patriots Sprint Tour event, but things were slowed before the first turn was even completed as a flip from Steve Collins’ #67 brought the race to a halt with a red flag condition. After a complete restart of the event, Zimbardi went to work on establishing his dominance on the field. Zimbardi was on cruise control for much of the early stages of the event, building a lead as big as nearly five seconds ahead of a tight battle for second between Darryl Ruggles and Scott Kreutter.
Zimbardi’s lead would be cut only by cautions, including one late in the going involving Cody Bova and David Just that tightened the field up for a final restart. Nothing would stand between Zimbardi and victory lane on this night as the Bradford, Pa. driver extended his series points lead with the victory.

Randy Chrysler was able to gain an early advantage in the BRP Big Block Modified feature, pulling away from pole sitter Tyler Willard on the initial start. However, it wasn’t long before Rudolph – in search of his third straight series win – was nipping at the heels of Chrysler from his second row starting spot.

Rudolph made his move to the inside of Chrysler on the end of the third lap and wouldn’t be touched from there. While Rudolph’s biggest challenge was lapped traffic, the racing behind him was intense. Willard, Jeremiah Shingledecker, Chrysler and Jimmy Holden were all involved in a four-way battle for positions two through five as the first 25 laps of the feature were run caution-free.

The big lead Rudolph had built was erased by a lap 25 yellow and several short cautions would follow, however, they were only delaying the inevitable as Rudolph cruised to victory lane for the third consecutive race.

The Thunder on Dirt Vintage Racing Series is unique in that each feature event is actually two races in one with cars from the Modifieds and Sportsmens division competing. On Saturday, it was many of the Modifieds out in front with Les Myers taking the lead around the one-third mark of the 15-lap feature and holding off Kevin Mahoney and Jim Kirkwood for the win.
Myers’ son Brian was able to rebound from a spin with five laps remaining to claim the victory in the Sportsmen division of the feature program.

Dennis Lunger, winner of all six points-paying races in the Pro-Mods division this season, raced his way to a non-points win this week. The win allowed him to keep his currently perfect Pro-Mods season alive. With it being a non-points race, Lunger didn’t have to drop to the rear of the starting field as is usually required by the previous weeks’ feature winner. Instead, Lunger’s #71 lined up outside the front row alongside Ryan Scott.

Lunger had jumped to the lead by the end of lap one before racing was slowed for a multi-car accident that collected Dennis Asel, Dennis Hagg Jr. and Zach Johnson. When racing resumed, Lunger quickly darted away from the field as Scott battled with Justin Carlson and Scott Gurdak for second.

Scott was able to hold off both of his rivals charges for second and Gurdak was able to nip Carlson at the line to steal away third-place. All of this was well behind Lunger, however, as the Albion native drove to the win for the seventh straight time in 2017.

Brent Rhebergen and Justin Carlson were the early leaders in the Outlaw E-Mods feature with Rhebergen leading the opening laps despite several quick yellows. Behind Rhebergen, two of the E-Mods best were making their ways to the front despite poor starting spots. By the eighth lap of the 25-lap event, Joel Watson had moved his way into the top four and David Scott had climbed to sixth.

From there, Watson and Scott’s nights took different paths. Watson was able to continue his charge to the front, riding side-by-side with Rhebergen at the completion of laps 10 and 11 before finally pulling ahead on lap 12. Scott begin to struggle with a lack of grip on the high side and ultimately fell back to 12th.

Watson was able to claim the checkers for the second straight week, backing up his first points paying win of the year which was scored a week ago.

Dan Nocero Jr. and Tommy Kosinski led the field to the green for the Super Sportsmen feature with Nocero Jr. leading the early laps before a caution for a spinning Mike Genco. After the restart, Nocero’s #6 again bolted to the front, but behind Jim Kibbe’s #18 was beginning to make a charge.

Kibbe emerged from a three-wide battle with Tommy Kosinski and Mike Kosinski with second-place and saw the gap to Nocero Jr. dissappear just moments later when the races second yellow flew. Kibbe would throw everything he had at Nocero over the next several restarts, finally passing Nocero with six laps to go and winning for the fourth time in 2017.

The fireworks won’t be relegated to on-track next weekend as a fireworks display to celebrate the Fourth of July holiday is planned for July 1 activities at the track. Also on the card is a 43-lap, $4,000-to-win Super Late Model special. The Shults Auto Group RUSH Crate Late Models, Sugar Grove Beverage Outlaw E-Mods, Wellington Log Homes Street Stocks and Bailey’s Towing and Recovery Super Challengers will also be in action. The Rusted Nutz RUSH Pro-Mods and Super Sportsmen are off next week, returning on Saturday, July 8.