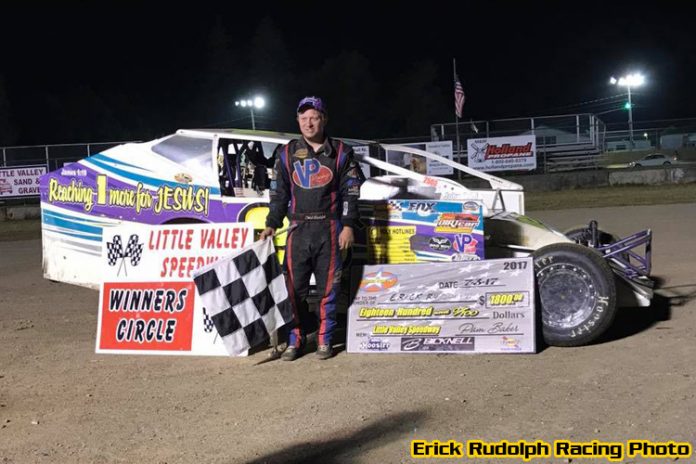 LITTLE VALLEY, NY – The annual Freedom Daze Show at Little Valley Speedway saw the most diverse racing card in the history of the track competing before a large crowd in perfect weather on Monday, July 3rd. The headline class was the Pete Loretto Memorial 30 lap Super Late Model Feature and was dominated by the almost invincible Max Blair, while John Waters triumphed in the Crate Late Models. Two open wheel divisions were on hand, as well, with defending champion Erick Rudolph winning the The Mod Tour Big Block Series event after a long absence and Mark Chiddy taking the BEI Lightning Series Sportsman Feature, which marked the first ever appearance of the dirt Sportsman, attracting a gaudy 44 cars, the highest car count in a division in the modern history of the facility. Finally, Jeremy Wonderling, doing double duty this night, won the Street Stock Feature

The Mod Tour Series was making its first appearance since Ron Smoker beat Kevin Bolland a number of years ago. This time, the defending series champion Erick Rudolph, making his first ever appearance at the facility, drove it like he’d raced there all his life, as he quickly moved to second behind leader Rich Richner on the second lap, after starting sixth. From there, he stalked Richner until taking the lead in lap traffic on the ninth circuit.

He then drove out to a commanding lead over the rest of the distance to prevail over defending Lernerville Big Block Champion, Mat Williamson, to score his fourth straight series win, weathering four restarts in the process. Richner finished third,while Rex King Jr. and JR McKinley rounded out the top five.

Rudolph noted, “It feels great coming to an unknown track. I had all the confidence in my team. We all put our heads together and were able to come up with something and turn some good laps around here. Restarts are always critical, especially when you have Mat Williamson behind you. He’s a great competitor. I was able to keep my head straight and hit my marks and put it here in Victory Lane.”


Blair, from Centerville, PA, who has been unbeatable recently at Little Valley, started fourth in the SLM event, but was quickly on the prowl, grabbing second by the second lap and then setting out after Greg Oakes, who had drawn out to a good lead from the outside pole. The blazing fast Blair reeled in Oakes on lap four and began hounding him for the lead. The only caution of the race came out shortly thereafter, with Blair wresting the lead from Oakes on the restart.

From there, his only challenge was navigating through lap traffic, which he did with his usual aplomb. At the line, it was Blair by close to half a lap, followed by Russ King, who journeyed up from tenth but never had a chance to test Blair. Oakes settled for third, with Chad Valone, and Bump Hedman rounding out the top five.

Blair offered, “I just love this place. I love the speed and how you get around it. I think the restart helped us out because it was a little too slick on the bottom to make a pass. He (Oakes) was pretty good. You never know what could have happened when we got to some lap cars.”

The Crate Late Model Feature saw Jason Knowles grab the early lead from the pole, with the veteran Waters, a many time Little Valley winner, who flanked him on the front row, close behind. Waters sparred with Knowles before taking the lead on a lap three restart. The race ultimately came down to a battle between Waters and arch rival Jeremy Wonderling, one that was played out numerous times over the years. Waters was able to establish a good early lead, but Wonderling kept him within arm’s length.

Two late cautions kept the issue in doubt, with Wonderling making a spirited charge on the outside in the final turn, which fell just short. Following Waters and Wonderling were Knowles, Brad Mesler, up from eighth, and Paul Grigsby, to round out the top five.

Waters allowed, “I kept entering too low on the restarts and pushed up the race track. On the last one I finally nailed it. Then I got scared and went to the bottom. I saw him (Wonderling) come around the outside and I just left him room up there. If he passed me, he passed me.”

The massive BEI Feature with 44 Sportsman cars, which took five heats and two consis to set the 25 car starting lineup, saw the veteran Chiddy, who started on the pole, survive a withering assault from Canadian veteran Chad Chevalier, which lasted most of the race. Chevalier took the lead on a lap two restart before Chiddy retook the top spot, careening around the outside in turn four. From there the two raced many laps virtually side by side. Chevalier threw everything he had at Chiddy, but couldn’t get the run he needed and Chiddy scored what was arguably the biggest win of his career and his first since winning at Humberstone four years ago.

Following Chevalier across the line were Andy Smith, Brad Rouse, and Adam Ashcroft to complete the top five. An emotional Chiddy declared, “I can catch my breath now. That was an awesome race. If it wasn’t for that restart (lap 2), when he got me on the top there, I don’t know if I would have known it was that good up there. When we had our restart I was on the outside. I figured, ‘what the heck,’ I’ll give it a shot too. As you could see, the car liked it up there.”

NOTES: The Pete Loretto Memorial honored one of the most dedicated racing luminaries in the region. Not only was he a former official, he was on Richie Evans pit crew for several years and had a radio show where he was dubbed Dr. Dirt. Perhaps his most lasting contribution to many many racers was his pains-taking creations of collages, gleaned from countless publications, which highlighted the careers of racing folks of all stripes, which he personally presented to them at various racing venues. The expressions on the faces of the recipients were priceless, as they couldn’t believe that anyone would take the time and commit the effort to creating these masterpieces to memorialize their lives in racing……………………. The 116 cars in the pits were the most in recent memory, swelled by many cars from Western New York and Southern Ontario, Canada, especially in the burgeoning Sportsman class.