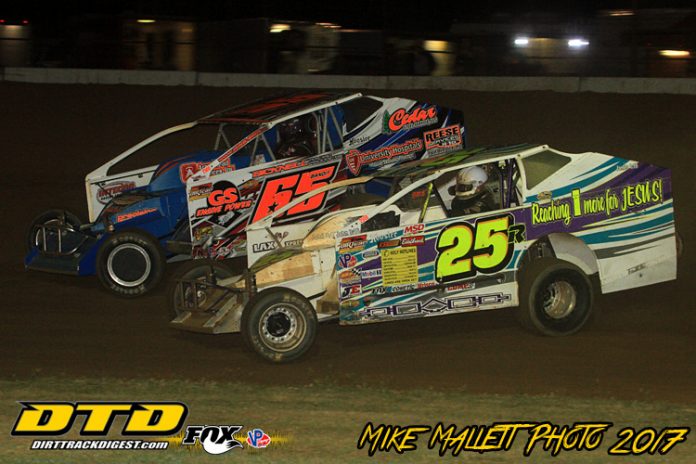 Erick Rudolph scored lucky number seven on in a special Wednesday night event for the Bicknell Racing Products Modified Tour event at the McKean County Raceway. It’s been an impressive run for the Ransomville, N.Y., driver as he has dominated the 2017 edition of the tour winning all but one series event to date, which includes the last seven in a row.

“We’ve won a bunch of races in a row and we are just having an awesome year,” stated Rudolph. “The car is working, I feel like I’m driving pretty good and the team is doing everything I ask of them, if not above the expectations. A long with that comes a little bit of luck. You’ve got to have it all to put one of these races together and right now got a good thing going.”

He’s approaching the ten win mark while driving for the Randy Chrysler team. They picked up the big win in the Short Track Super Series event at Susquehanna a couple weeks ago while dominating the BRP Modified Tour in 2017. It’s been a good season to date.

“This car here, we have fun in all the cars, but this is a travel car and there is no weekly stuff,” mentioned Rudolph. “We look forward to every event. It’s always fun when the cars are running good. It’s got to have a batting average of over 500 for the year. Hopefully we can keep it going.”


McKean County offered Rudolph the chance to race at another new track as does with much of the BRP Tour. He enjoys the chance to get out on the road to visit new places besides his traditional stomping grounds in Western and Central New York.

“I like going to new places,” said Rudolph. “This whole tour is basically new tracks or maybe places I’ve been to once or twice. It is a lot of fun for me. At home we’ve run Ransomville (Speedway) for five years, ran Canandaigua (Motorsports Park) 20 times and it doesn’t have same excitement as getting to a new track. I really look forward to these races.”

Rudolph has been nearly unstoppable in his POGO powered Bicknell on the tour. On Wednesday he struggled in the heat race before making a charge in the feature. He started 13th, got a good start before systematically picking cars off one at a time.

“This is our first time here at McKean County we took a look at the track and kind of guessed,” stated Rudolph. “We weren’t close to where we wanted to be. We suffered a bit in practice and then in the heat race. We threw some changes at it and away it went. We had a really good start.  We must have got five or six of them on the initial start there. We got lucky. From there the car was handling perfect.”

Rudolph moved into second by the seventh lap setting his sights on outside front row starter Rex King Sr. King jumped out front early setting a torrid pace in the opening circuits. He found traffic by the lap five. Rudolph was chopping away at his lead before the caution came on lap 11 as Gerald Bowser and Chris Haines tangled. King beat him on the first restart but another quick caution gave Rudolph a second chance. This time he didn’t miss it.

“He’s a great competitor,” cited Rudolph of King Sr. “He got the jump on me on the initial restart, then on the second one he was a little bit ahead of me but I went in a little bit harder. I got him in one and two there. It seemed to work. I found a line and from there it was smooth sailing.”

Although things went smoothly, Rudolph quickly found himself in traffic after that. He was patient while working his way through the field. At the conclusion of the 35-lap affair he was passing cars inside the top ten.

“Once you get in traffic you got to stay on your toes,” cited Rudolph. “The lapped cars were pretty good tonight. They were pretty easy to get around. This track is pretty tough. I’m out there thinking I got full control but at the same time it feels like you are on the edge and out of control. It’s a tricky place to run.”

King Sr. ended up hanging on to finish in the second spot after his car started developing a miss just before halfway. He did what he needed to in order to limp it to the finish.

“It was good,” he said about the going early. “I picked up a miss about lap 15 and it just started to progressively get worse. I shut all of the power off except for the ignition. That helped a little bit. I was just hanging on the last 15. I don’t know if you could hear it, but it was missing pretty bad.”

It’s been a tough summer so far the King Brothers Team as they suffered several of mishaps and struggled with engine issues. Wednesday King Sr. finished second while Jr. was able to come up to finish fifth. He was pleased with the team effort on the night.

“We’ll take it,” commented King Sr. “This is a real good night. Lately, for what we’ve had, we’ve had crashed cars and blown motors. Now we are holding our own, not breaking or busting up any more stuff. We are getting some stuff rebuilt and getting ready to go for the end of year.”

Richner Holds on for Podium Finish

Rick Richner fended off the wolves to score the final podium spot on Wednesday. The team has been struggling in weekly action so a strong run on the road was a boost for everyone.

“This feels really good,” stated Richner. “We’ve been struggling. We’ve been running Canandaigua and we can’t get that place figured out. We tried a whole different setup tonight and I can’t wait to get there back there Saturday.”

Richner found himself in a dogfight with Justin Wright and Rex King Jr., in final laps of the feature as he battled traffic. He kept them at bay in order to finish a strong third.

“We were getting into some heavy traffic,” cited Richner. “The guys kept dipping into the infield and getting smoke up on the track. I couldn’t tell if there was a slow car in there or what. It got pretty hairy there toward the end but we got through it.”

Wright started in the pole position on Wednesday before falling to fourth. He made some adjustments to the car in preparation of the track getting slower as the race went on and it just never came to him.

“We didn’t put the anchor out too bad, but you never want to start on the pole and go backwards,” mentioned Wright. “I thought the track was going to blow off a little more than it did. We tightened up a little too much, but we’ll take it. It never streaked up or polished off where I thought they’d come back to us a little bit. I was just too tight the entire night.  We’ll take this and move on.”

You never want to go backwards, but Wright is happy with the progress the team is making this year. He’s become far more consistent as he’s now battling for spots in the top five to ten instead of being outside of those positions at the end.

“It’s a lot more fun this year,” said Wright. “We are getting a lot more consistent where instead of hoping for a top 12 at Canandaigua we can hope for a top five. Everything is starting to make sense like some of them guys that have helped me out and I talked to kept saying. You can’t pinpoint when it happens but sometimes you flip a switch and things start jiving. That’s where we are getting.”

King Jr., drove off the top of the track at the start of the race in turns one and two losing several spots. He eventually regained all of them and moved forward to finish fifth. Had he not had the mix up early he felt like he had a car that was good enough to finish on the podium.

“We were good,” stated King Jr. “I drove in and my right front just got off into the wet stuff on the top and it took me out. I think we came back on in tenth or something. It felt like 30th. We came back up to fifth. By the time we got there everyone kind of lined out. We weren’t bad. We just had the mishap in the beginning and couldn’t rally back to our full potential. I feel like we could have been a top three car, but we’ll take fifth being here for the first time.”

Fink’s night ended during the pace laps of the feature. Fink’s car came to stop on the backstretch and he was towed off from the rear before the green…