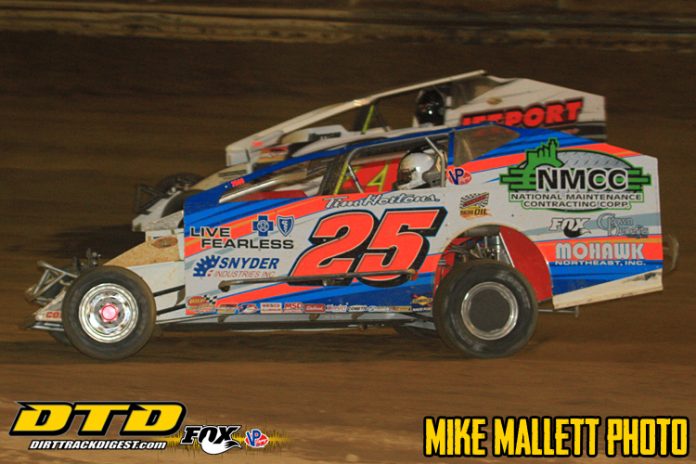 MIDDLEBOURNE, WV – It was a warm spring night for the kickoff of the 2018 BRP Modified Tour season. 28 cars in the pits at the Bullring at Tyler County Speedway. Two-time point champion Erick Rudolph had to work from a 21st starting spot to pick up his 9th straight win on the Tour, dating back to last season.

With the 12-car invert, Jimmy Holden and Tommy Glenn made up the front row for the 35-lap, $3000-to-win feature. Holden would jump out to the lead at the drop of the green flag. Before a lap was complete, the yellow would come out for the first time for the 73MD of Travis Shingledecker stopped in turn 4. Holden would have the advantage once again on the restart. The track did not disappoint as from the start there was a lot of three-wide racing including right after the restart, with Lonny Riggs splitting Ricky Richner and Tommy Glenn, with Richner taking second. It was a rough night for Travis Shingledecker as he would bring out the first two cautions before two laps were complete. He would head to the pits after the second caution.

Just before the third caution, Richner was closing the gap on Holden for the top spot. We’d go a few more laps before the caution would wave once again. This time it was for former Tour Champion Rex King Jr, who gets loose and just clips the wall. He would stay on the track and go to the tail of the field.

Tyler Willard, who started in sixth, would spin on lap 6 but would rebound to finish the night in the top ten. The top three are Holden, Richner and Phil Vigneri III. Erick Rudolph, who started 21st, after having wheel issues in his heat and winning the consi, has worked his way up to the 6th spot.

Holden remained out front through 17 laps until he slowed coming out of four and would stop at the exit of turn four, with smoke pouring out. Holden had held the lead all race. The top three now shows Rudolph up to first, followed by Richner and Vingeri. The 165 of King Jr. is working his way back into the top ten by lap 20.


Problems on lap 27 for one of the top runners. Richner, who had been running in the top five all night, connects with the front stretch wall and stops at the entrance to turn one. Rex King Sr. also stops on the track with ten to go. Jeremiah Shingledecker, who started in twelfth has made his way into the top five.

Rudolph would stay out front for the last ten laps and one more caution with three to go. The Ransomville native picks up his ninth straight win on the Tour. J. Shingledecker would get around Vingeri on the last lap to claim second with Vingeri to third. Dave Murdick had a good run finishing fourth, and King Jr. would round out the top five.

The next race for the BRP Modified Tour will be Saturday, April 28th at Sharon Speedway in Hartford, Ohio.

# # #
If you would like more information about this topic, please contact Julie Coates at 440-796-5027 or email at Julie.L.Coates@gmail.com.