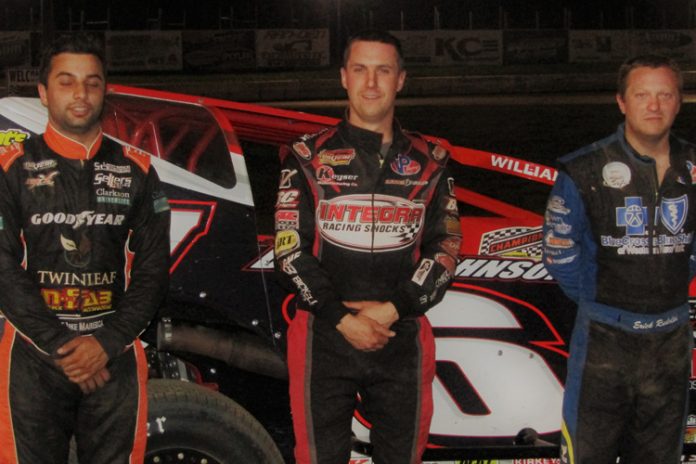 HAMMETT, PA – It was a busy Memorial Day weekend for the BRP Modified Tour with visits to Sharon Speedway and Eriez Speedway. It had been since the end of April since the Tour was able to get on the track, due to rainouts. Unfortunately, Mother Nature got the W at Sharon Speedway. Mat Williamson was able to hold off Erick Rudolph, who was going for his tenth straight Tour win, at Eriez Speedway, holding on for the victory in the 35-lap, $1800 to win feature.

31 Modifieds drivers were in attendance for the show at Sharon Speedway. An earlier scheduled race had been rained out at Sharon. Rain was once again threatening, but that didn’t stop the strong field of drivers from taking to the track and putting on a great show.

Unfortunately, only heat races were completed before the skies opened up and ended the night. The race will not be rescheduled, so drivers in attendance will receive their heat race points, plus points for attendance. Mother Nature gets the win.

31 drivers also set out Sunday to take on the 3/8-mile, dirt oval at Eriez Speedway. In front of a large crowd, and full pits (which included over 160 cars), the BRP Modified Tour gave the fans a great race on a picture-perfect evening.

Mat Williamson and Michael Maresca made up the front row for the 35-lap feature. Williamson got the jump on the start and would open up a small lead over Maresca. It would only be two laps before the first caution flew. Several cars tangled in turns one and two, with all getting going except Jim Rasey, who was stopped just inside the infield. Rasey had a rough start in the race, also bringing out the caution with a spin on lap 12.


Maresca would get up beside Williamson on the restart, but the 6M of Williamson would hold on to the top spot. Rex King Jr would move up to 4th on lap 5, getting around Haines, with the 33 of Jim Kurpakus just ahead of him in third. Jimmy Holden and Jeremiah Shingledecker, who both have had strong runs all season, would call it an end of the night by lap 10. They were both in the top ten in points going into Sunday night’s action.

By lap nine, the leader was already reaching the back of the field and getting into lap traffic. Erick Rudolph, who started in the 10th spot, would move into the top five by lap 12. The top five would include Williamson, Maresca, Kurpakus, Rex King Jr, and Rudolph.

On the restart, battling for third, cars would go three wide coming out of two and there just wasn’t enough room. “Cooter”, Rex King Jr would hit the backstretch wall hard. He would be okay. He had a slim point lead over Jeremiah Shingledecker and Dave Murdick going into Sunday night’s race.

Williamson would get a great jump on the single-file restart. Brad Rapp used a higher line than most cars and was working quickly through the field. While battling with Garrett Krummert, Rapp would get into the front stretch wall, slowing with a flat right rear. He would head to the pits to get fixed and would rejoin the tail of the field.

Lap 15 restart, the top three would be Williamson, Maresca and Rudolph. Just at the drop of the green, the 44V of Phil Vigneri III would slow on the front stretch, bringing out the caution for a fifth time.

The race would go green for 17 laps. The leaders would again reach the tail of the field and get into heavy lap traffic. Rudolph would get around Maresca and would close in to battle Williamson. Williamson would get behind a couple of lap cars running double-file, which would allow Rudolph to get a little closer. Rudolph would close within two car lengths, but the 6M would work through traffic and be able to open up a gap on the 25 sitting in second.

The final caution would fly on lap 33 when Skip Moore would slide in turn one, Krummert, having no where to go, would slam hard into the side of him. Krummert had moved up to the fourth spot.

It would be a two-lap shootout for the victory. Williamson, who had great restarts all night, would hold on for the win and take home the $1,800 check. Rudolph, Maresca, King Sr and Kurpakus would round out the top five.

The BRP Modified Tour will race next at Sharon Speedway on June 23rd for $2,000 to win.