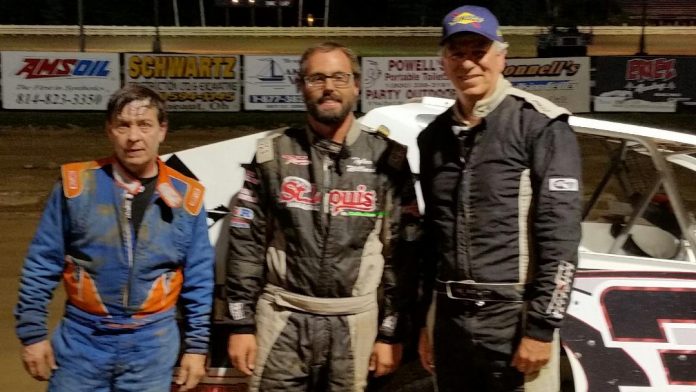 It was a two-race weekend for the BRP Modified Tour, on the hottest weekend of the season so far. We’ve completed four races this season and we have had four different winners. Jim Weller Jr. grabbed victory at Raceway 7 Friday night and Rex King Sr. dominated at the New Stateline Speedway on Saturday.

The BRP Modified Tour returned to Raceway 7 on a hot Friday night. The two previous race winners were not in attendance, so that meant a third different winner would be crowned in three races. JR McGinley and Kevin Hoffman made up the front row for the start of the 35-lap feature. Two-time tour winner at Raceway 7, Dave Murdick started at the tail of the field, after issues in the heat race. Several cautions occurred in the first 10 laps of the race. During those cautions, Rex King Sr. was in and out of the pits, and one of the cautions came out as Bob Warren and Rex King Jr. spun. Chris Rudolph, with no where to go, slammed into the side of King Jr. Tyler Willard, who has had good runs each race, jumped out the lead and had opened up a gap on the battle for second behind him. One battle, for third place, involved Jim Weller Jr. and Garrett Krummert. On the restart, Weller Jr. would get into Krummert, sending Krummert spinning and ending his night. The top five would be Willard, Weller Jr., Kyle Fink, Rick Regalski and Murdick. After a great battle for the lead, Weller Jr. would get the advantage over Willard on lap 24. He would lead the rest of the way and pick up his first Tour victory of the 2018 season. In victory lane, Weller did apologize for getting into Krummert. Willard would finish second. Murdick would gain 20 places during the race to finish third. McGinley and King Jr., who both spun earlier in the race, would battle back to finish in the top 5.

It was another hot night on Saturday as the BRP Modified Tour traveled to the Empire State to take part in the Open Wheel Mania at the New Stateline Speedway. After Friday night’s race, Rex King Jr. would hold a slim lead over second place Dave Murdick. Rex King Sr. and Phil Vigneri III started up front for the 35-lap, $2,500 to win feature. King Sr. would quickly jump to the lead with Vigneri in second. Tyler Willard would pick up a couple of spots and move into fourth. Jimmy Holden would spin, bringing out the first caution on lap 3. After a caution-filled race the night before, this race would see a few cautions early, but then a long stretch of green flag racing. The top four of King Sr., Vigneri III, Willard and King Jr. would get into lap traffic by lap 15. The low line was the preferred line and that made it a challenge for the leaders when they got into lap traffic, having to look for other lines. King Sr. would open up a gap over second through fourth, who were bunched up and battling hard. Murdick who put on a show coming from 23 to third, would have mechanical issues and pull into the infield on lap 24. When the checkered flags flew, Rex King Sr. would pick up the win with Phil Vigneri III finishing in second.

The full results will be available on our website shortly. 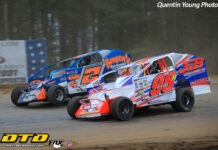