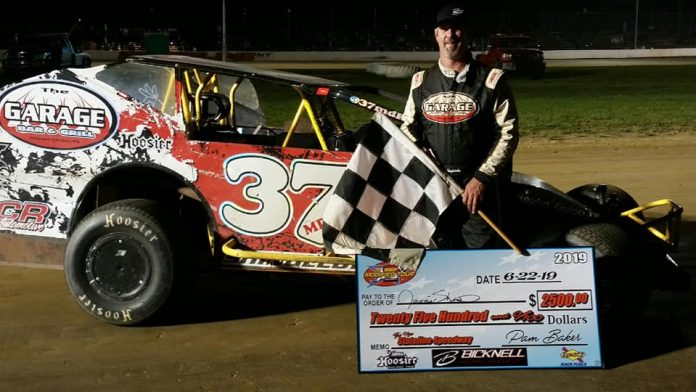 The BRP Modified Tour took to the track at the New Stateline Speedway. After the top 12 redraw, Kevin Hoffman and Tom Glenn were to start on the front row. Unfortunately, issues kept Tom Glenn from starting the race, so that moved Jim Rasey to the front row. The caution quickly came out on the start as Bob Warren and Lonny Riggs had issues in number one as the cars were all bunched together. Jim Rasey would quickly jump to the front on the next start with Hoffman dropping back to second and Jeremiah Shingledecker up to third. A second caution flag came out with the 66M of JR McGinley slowing on the front stretch on the front stretch.

Jim Rasey would open up a six-car length lead over second place Shingledecker, with Hoffman and Rex King Jr. battle for third. Rasey would extend that lead to half a straightaway, but it would be lost when the caution flew for the 00 as Hoffman spins in turns one and two. Rasey would grab the lead again this time trying to old off the challenges of the 777 of Tyler Willard. The two would battle side-by-side for several laps, exchanging the lead several times. Brad Rapp who started at the back of the field after issues in his heat, would move up to the top ten by the halfway point.

19 laps in, the tight battle between Rasey and Willard would come to an end when Willard is turned around. This would send Willard and Rasey to the back of the field. The top five would now be Shingledecker, King Jr and Dave Murdick, Kyle Fink and Jimmy Holden with Rapp up to sixth.

While King Jr tries to reel in Shingledecker, it was a close battle for third between Murdick and Fink. Shingledecker able to hold off the challenges from King Jr, King Jr better in the turns, but Shingledecker would pull ahead on the straight stretches. Murdick was using the restarts to look to the inside of Keng Jr, who was putting a lot of pressure on Shingledecker. When the checkered flag flew, Shingledecker, from Polk, PA, would pick up his first win at the Busti, NY track. King Jr would finish in second. Fink would get around Murdick with two laps to go to take third and Rex King would finish in fifth.
The next race on the BRP Modified Tour will be on Friday June 28th at Thunder Mountain Speedway.