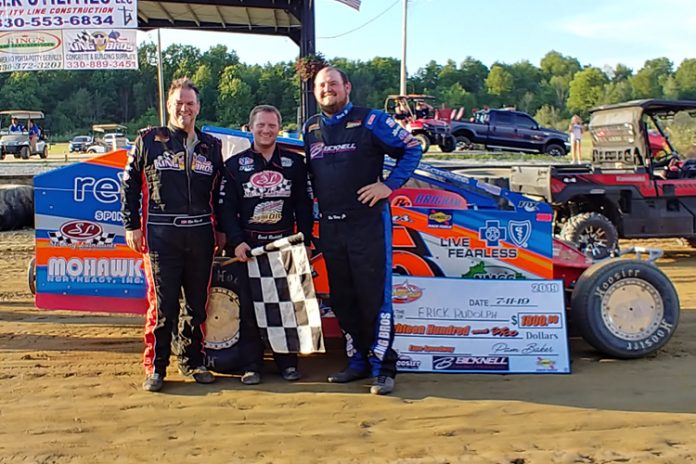 CORTLAND, OH – The rain held off and the sun came out for a great race during the Trumbull County Fair at Expo Speedway. Erick Rudolph, from Ransomville, NY, made his first start of the season with the BRP Modified Tour and ended his night in Victory Lane.

Twenty-one cars were set to compete for the $1,800 to win, twenty-five lap event at Expo Speedway. The last two BRP Modified Tour Points Champions started on the front row for the feature. Rex King Jr. and Erick Rudolph were side-by-side to start the green. It was a different start from the heat race where King Jr jumped out front, when the green flag dropped in the feature, Rudolph quickly jumped out front. With the top three running nose to tail, a hard-fought battle was going on for 8th place between Chris Haines, Garrett Krummert and Will Thomas III.

After five laps complete, Rudolph had opened up a half-straightaway lead over King Jr and by lap 8, the leaders were getting into lap traffic. The gap remained the same between first and second, and the top five would be Rudolph, King Jr., Rex King, Kevin Hoffman and Phil Vigneri III. On lap 10, it was a three-care battle for fourth between Hoffman, Vigneri and Kyle Fink. Vigneri would get the position on lap 14.

The green flag would remain out until lap 20 when a multi-car incident resulted in Max Smoker’s car rolling over. Thankfully, he was not injured. The incident also involved Fink, JR McGinley, Shawn Fleeger, Mark Frankhouser and Scott Kay. All cars would be able to continue racing except Smoker and Fink. Rudolph had lapped up to the 8th spot, which was held by Thomas who got the “lucky dog”.

The last five laps would stay under green. During that stretch Vigneri would come up to battle King for 3rd. Dave Murdick and Hoffman were side-by-side for 6th place. When the checkered flags flew on lap 25, Rudolph would pick up his first win of the season followed by King Jr., King, Vigneri and Thomas.

The next race for the BRP Modified Tour will Saturday, July 20th at Michaels Mercer Raceway.