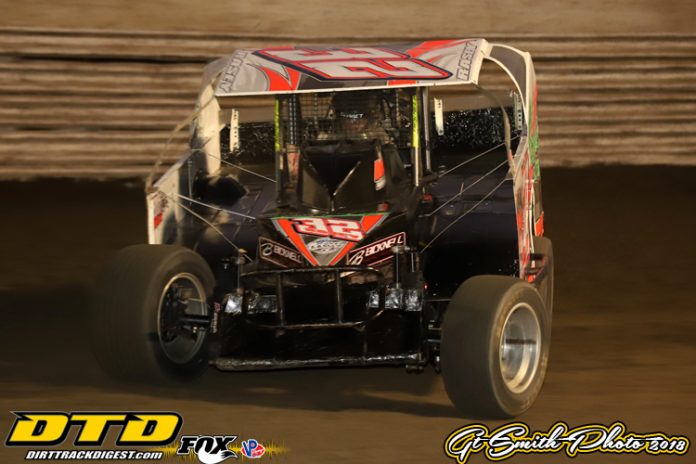 On a beautiful, sunny day the BRP Modified Tour visited Thunder Mountain Speedway in Brookville, PA for the second time this season and bringing the victory was Jim Rasey of Southington, OH.

There were 21 cars on hand for the event and Tom Glenn and Dave Murdick led the field to the drop of the green, but before all the cars could get through turn one, Skip Moore would get sideways in front of the field and collected six other car with him. Kyle Fink go the worst of it as he was towed to the pits and was unable to get back out for the feature.
Once again, on a complete restart, Dave Murdick jumped into the lead at the drop of the green and set the pace for the race. Jim Rasey who started third was in second with Rex King, Sr. who started ninth came into third on lap two. On lap seven, Murdick started to lap the field and the next caution flew on lap eleven when Brad Rapp slowed in turn two and had to be towed off on the hook.

The next green flag lap found Rasey taking the lead away from Murdick and extended that lead by several car lengths. JR McGinley would bring out the next caution on lap 25 when his car came to a stop just off the apron on the front stretch. Rasey kept his cool and maintained the lead on the restart with Murdick Rex King, Sr. and Rex King, Jr. close behind. The final caution would fly on lap 31 when Dave Murdick suffered a flat tire. He was able to change it and rejoined the cars at the tail of the field.

The final four lap shoot out found Rasey in the lead, and he went on to pick up his first BRP Modified Tour win of the season. Finishing second was Rex King, Sr. over Rex King, Jr. Making his way from the seventeenth starting position, Rick Regalski finished fourth with Jeremiah Shingledecker fifth. Heats were won by Kevin Hoffman, Rex King, Jr., and Kyle Fink.

The final race of the series will be held at Ransomville Speedway on Saturday, September 14, 2019. Currently Rex King, Jr. leads his father in the points battle by 30 points going into the final night.