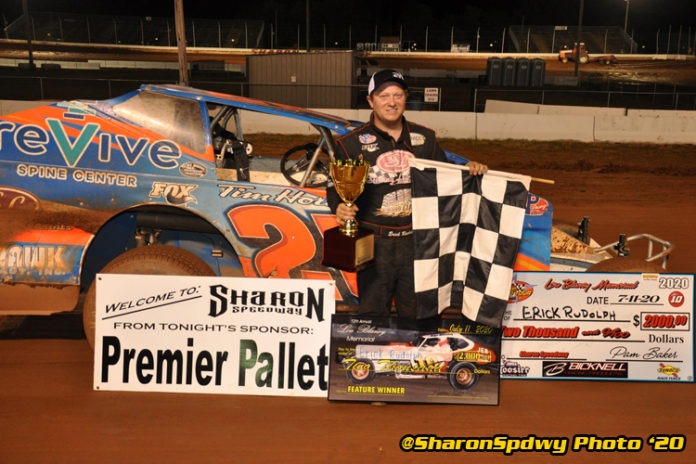 HARTFORD, OH – Heavy rain off and on for over 24 hours that didn’t end until after 1 p.m. created for fast conditions as Erick Rudolph (BRP Modified Tour) was victorious in the annual Lou Blaney Memorial event that benefits the Alzheimer’s Association.

Fresh off a $5,000 sweep of the Lernerville and Tyler County Speedway events one week ago, Erick Rudolph added another $2,000 payday for his third straight BRP Modified Tour win. Rudolph became the 10th different winner in 12 “Lou Blaney Memorial” Modified events following his impressive 35-lap win from the 11th starting spot.

“We have a little bit different of a track here tonight with the rain,” explained the 27-year-old Ransomville, NY driver. “Regardless we were able to make the proper adjustments and do what we needed to do out there. We’re glad to have the opportunity to come down here. This car was on rails from the drop of the green tonight. About halfway through I lost brakes. I hate to see what happened to Mikey (Maresca)- I got into him a little bit and I owe him an apology for that. I’m really happy with my team how they worked and gelled today. I’d like to thank the fans for coming out and all of the names on the car.”

Brian Swartzlander used the outside to power into the early lead past Eric Gabany, while Mike Maresca moved from fifth to third and Garrett Krummert from seventh to fourth on the opening lap. Krummert then overtook Maresca for third on lap two. Rudolph started 11th, but quickly cracked the top five on lap three moving past Big-Block Modified rookie Steve Slater.

By lap four, the top five began to distance themselves from the field. Krummert continued to move forward taking second from Gabany on lap five. While Swartzlander caught lapped traffic on lap seven, Maresca and Rudolph went to work on Gabany and dropped him back two more spots. Gabany fell from the lead pack as it was now a four-car race for the lead before a caution for Colton Walters with 12 laps scored. Under caution, Maresca exited the event moving Rudolph to third.

When racing resumed on lap 13, Krummert overtook Swartzlander for the lead and one lap later Rudolph dropped Swartzlander to third before a pair of cautions slowed action with 16 and 17 laps scored respectively. When green replaced yellow on lap 18, Krummert’s lead would last only one more lap as Rudolph powered around the cushion in turns one and two to drive by the Bedford BRP Tour season opening winner.

One more caution was all that slowed Rudolph’s #25 from his third career Sharon win. Rudolph took the checkered flag by a margin of 1.061 seconds over Krummert. Swartzlander was third. Rex King, Jr. battled his way from 14th to fourth as 12th starting Brad Rapp completed the top five. Sixth through 10th were Jim Rasey from 20th, Ryan Susice from 16th, Greg Martin from 21st, Rex King, and Phil Vigneri III from 23rd. King, Rudolph, Chad Brachmann, and Krummert won the heat races over the 39-car field. Martin won the last chance B main.

Sharon will return to action tonight (Sunday, July 12) with Justin Snyder’s “Salute to the Troops” paying $6,000 to-win for the All Star Sprints in the finale of Ohio Speedweek. The fastest qualifier will receive $500 in memory of Richard Murcko, provided by his brother Reggie Murcko. The non-wing RUSH Sprint Cars will also be on the card racing for $600 to-win. Gates open at 3 p.m. with warm-ups at 6 followed by qualifying and racing at 7. General admission for those 14 and over is $25, which includes the infield fan zone. All veterans of war receive $10 off general admission. Kids 13 and under are free. Pit passes are $35.