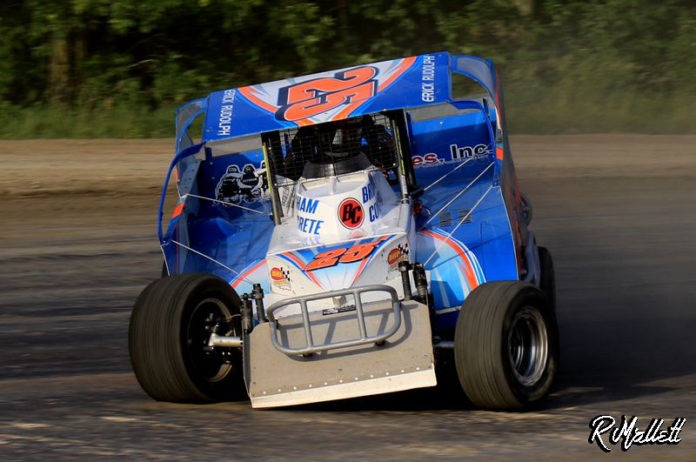 BROOKVILLE, PA – On a beautiful night at Thunder Mountain Speedway, Erick Rudolph made it four for four by winning the BRP Modified Tour 35-lap feature event.

There were 27 cars filling the pit area at Thunder Mountain Speedway in Brookville, PA on Friday night for the fifth race in the BRP Modified Tour series.  Bedford Speedway winner, Garrett Krummert and Rick Regalski brought the 26 car field to the drop of the green flag.

Rick Regalski led the first lap, but Garrett Krummert took that position away on lap two.  Before the third lap could be completed, a pile-up in turn four that found Mark Frankhouser, Chris Rudolph, Steve Feder, Steve Slater and Ralph McBride all collected at the bottom of the speedway.

On the restart, Krummert jumped out once again into the lead with Regalski and Erick Rudolph fighting for the second position.  Lap ten would find Rudolph finally making his way past Regalski for second.  The caution flag flew once again for Ralph McBride which would end his night.

Krummert led once again until misfortune on lap twenty entered the picture and ended his night after breaking a shock and bird cage.  Rudolph who was sitting in second, inherited the lead, but Rex King, Jr. had made his way into third and challenged Rudolph on the restart.

Rudolph and King, Jr. battled back and forth for a couple laps before Rudolph pulled out to a couple car lengths ahead of King, Jr. and the duo entered heavy lapped traffic by lap thirty.  Rudolph held on to pick up his fourth win in four races with the BRP Modified Tour.

The BRP Modified Tour will head to Michaels Mercer Raceway on August 8th for the running of the Michaels Family Memorial Race.  The raindate for this race will be August 15th.