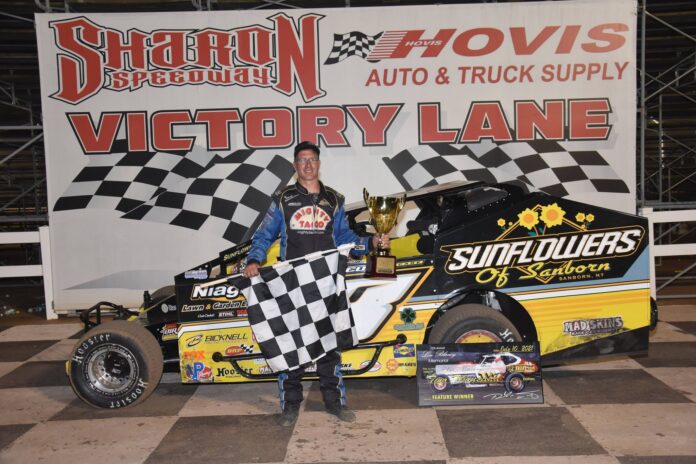 HARTFORD, OH – Sharon Speedway hosted the 13th annual “Lou Blaney Memorial” presented by Premier Pallet and the Ryan Blaney Family Foundation on Saturday night. A huge crowd was on hand as Spencer Bayston (FloRacing All Star Circuit of Champions presented by Mobil One) and Chad Brachmann (BRP Mod Tour for the Hovis Auto & Truck Supply Big-Block Modifieds) celebrated in the Hovis Auto & Truck Supply victory lane with not only their first event wins, but first career Sharon triumphs. Seventy-seven cars were on hand for the two-division show that raised approximately $15,000 for the Alzheimer’s Association through the auctions and benefit raffle.

Spencer Bayston passed George Hobaugh for the lead on lap 13 then fended off a big slide job attempt by Tyler Courtney on lap 29 to become the amazing 12th different “Lou Blaney Memorial” victor in 13 events! Bayston earned $8,000 for the 30-lap All Star-sanctioned victory as he became the seventh different “410” Sprint Car winner in as many races in 2021 at Sharon.

“That was a little too close for comfort,” acknowledged the 22-year-old Lebanon, Indiana racer. “He (Hobaugh) kept floating up on the straightaways and I felt like I didn’t have enough corner speed to get next to him on exit. I’m just happy to get it done as that was a little harder than it needed to be. The throttle was hanging at 3000 RPM’s so under caution I was having to hold it by hand. I was carrying too much throttle through the corners, but all in all we got it done and we’re in victory lane. This should have been my second win as I felt like I gave one away at Muskingum. Thank you to everyone for coming out. This is such a cool event to be part of. I don’t know what the racing was like behind me, but I was having the time of my life.”

For the second straight All Star show at Sharon, local racer George Hobaugh started on the front row thanks to a dash victory, but this time charged into the lead with Cap Henry, Dave Blaney, Bayston, and Tim Shaffer in tow. Hobaugh, who won at Sharon on May 15, quickly pulled away on lap two, while it was a three-car battle for second. Blaney made the pass of Henry for second on lap three and began to close on Hobaugh one late later. By lap six, Blaney caught Hobaugh and the two were in traffic on lap seven. Hobaugh made some nice moves and stretched out his lead again on lap eight, while Bayston passed Henry for third. Ninth starting Tyler Courtney also got by Henry for fourth on lap nine.

A spin by Tim Shaffer halted action for the first time with 10 laps scored. When racing resumed, Bayston powered around Blaney for second then went after Hobaugh. Bayston got a big run off the top of turn four on lap 12 and put a big move on Hobaugh entering turn one to make the slider stick. Hobaugh’s excellent run ended when he clipped an infield tire and flipped with 16 laps scored. He was okay. When racing resumed, Blaney went low to try and get under Bayston but also caught an infield tire, which caused front end damage and ended his night and shot at three wins in his father’s memorial.

With Hobaugh and Blaney out of the event, Courtney found himself in second with Cory Eliason third. Bayston caught traffic on lap 23 as Courtney, the All Stars’ points leader, closed. On lap 29, Courtney threw a big slider on Bayston in turn two, but the move didn’t stick as Courtney slapped the fence and suffered a flat tire. Bayston then went unchallenged for his fourth career All Star win, but first in the Mike McGhee and Associates #11.

Eighth starting Eliason crossed the finish in second. “Sharon Speedway was definitely in its prime tonight,” expressed the Visalia, California racer. “It was pretty badass. We could run the middle. It’s unfortunate that Dave (Blaney) broke, but fortunate for me because I probably didn’t have a chance to get going forward when I saw him go to the bottom. He’s so good around here at that speed down there; I can’t do that. I’m more of a top guy. That opened the door and allowed me to pressure Sunshine (Courtney) a bit. He went hard at Spencer. I thought we could have had a good race for the lead if we could have stayed in traffic. Hopefully we can come back tomorrow because we had a fast hot rod.”

Bill Balog had another strong Sharon run in third. Thirteenth starting Danny Dietrich, who won the June 15 Ohio Speedweek event, passed Cap Henry for fifth on lap 22 then was able to get by the slowing Courtney to finish fourth. Courtney limped across the finish in fifth with a blown tire. Brent Marks charged from 21st to sixth as Justin Peck, Zeb Wise, Henry, and Hunter Schuerenberg completed the top 10. Sye Lynch was the top local finisher in 11th.

Marks set fast time overall in qualifying against the 43-car field with a lap of 14.733. Peck, Eliason, Hobaugh, Lynch, and Skylar Gee won the heat races. Henry and Hobaugh copped the twin dashes to earn front row starting spots. Lee Jacobs was victorious in the C main, while Marks won the B main.

“The breaks fell my way tonight but my car was really good,” stated the 46-year-old Sanborn, New York racer. “I have to tip my hat to my dad, brother, Andrew and Mike. I’ve been kind of rough on them lately. We’ve been struggling. We finally got the car right tonight and I did my part. I’ll tell you what, this place is awesome when it’s smooth. I’ve been here when it’s been rough and choppy. This was great tonight. I’d rather have it like this any day of the week. This is my first win at Sharon and we’ve come here a bunch of times so this is pretty cool. It’s an honor to be here in the same category as all of the other guys that have won this race- especially for a great man.”

RUSH Sportsman Modified standout Chas Wolbert led the opening lap driving Ryan Riffe’s #1x “358” Small-Block Modified for the first time, but his lead lasted only a lap as New York’s Kyle Inman slipped under Wolbert to lead lap two. Inman began to pull away on lap four and by the time he caught traffic on lap 14 his lead stretched out to a 2.5-second advantage over Wolbert.

On lap 20, Wolbert and New York racer Greg Martin made contact with Wolbert spinning and Martin suffering a flat tire as he had to yield second place. With Wolbert and Martin out of the mix, Brachmann lined up fourth on the double file restart and would power around the outside past Rex King, Jr., Kevin Hoffman, and Inman for the winning move. Three cautions were all that slowed Brachmann’s run to the finish in his Sunflowers of Sanborn/Niagara Lawn & Garden Equipment-sponsored #3 as he took the checkered flag first by a margin 3.814 seconds.

Inman, who was making his first Sharon start since running an E-Mod at the track 10 years ago, was a solid second as he fended off 27-time track winner, Rex King, Jr., for second. Jeremiah Shingledecker charged from 13th to finish fourth as he was right on Inman and King, Jr. at the finish. Rex King made his way from 17th to finish fifth.

Sixth through 10th were Brad Rapp, Kyle Fink, Brian Swartzlander, Garrett Krummert, and Martin, who came from the tail after his flat tire. Heat winners over the 34-car field were Wolbert, Krummert, King, Jr., and Dave Murdick. The last chance B main was won by Rick Regalski, Jr.

Sunday’s Justin Snyder’s “Salute to the Troops” event for the All Stars and Terry Bowser Excavating RUSH Sprint Cars was rained out. Coming up next Saturday night (July 17) will be the inaugural “Bill Forney Memorial” featuring the Pace Performance RUSH Late Models in a $3,199 to-win Flynn’s Tire/Born2Run Lubricants Touring Series event plus the Terry Bowser Excavating RUSH Sprint Cars, Gibson Insurance Agency Pro Stocks, and the HTMA/Precise Racing Products RUSH Sportsman Modifieds. General admission is $15. Kids 13 and under are free. Pit passes are $35. All gates open at 4 p.m. with racing at 7.