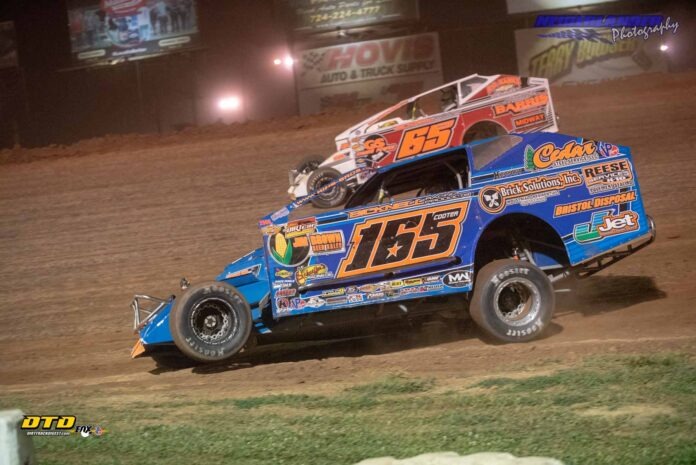 SARVER, PA – For the second straight week blue skies welcomed racers and fans the ‘The Action Track’ as the BRP Modified Tour along with the Fab4 Revved Up with Marburger Farm Dairy weekly divisions were in action on Big Rig Night.

The ‘Bandit’, Rex King, Sr. and BRP Modified Tour point leader, Chad Brachman, led the ‘Lernerville TV 35’ to the green flag with King, Sr. jumping out to the early lead. The two battled side-by-side until lap four when Brachman was able to inch ahead on lap four. Brachman’s reign at the top was short lived as King, Sr. fought back on the bottom to regain the lead by lap eight. King, Sr. had slowly begun to stretch his lead, but the action was slowed on lap 13 by the stopped car of Jim Rasey on the back stretch. As the field came to green, fourth running Rex King, Jr., made his way into the second spot and was hooked up on the bottom. King, Jr., made his move for the lead on lap 16 and stretched his lead out to over 2.5 seconds by lap 25 as Early race leader, King, Sr., faded back to fourth as Brachman and Garrett Krummert got by. After two late race cautions on lap 27 and 32, King, Jr. was able to hold off challenges from Krummert and Brachman to capture the win as he crossed the line 1.5 seconds ahead of Krummert. Brachman finished third as Eric Gabany came home fourth with Dave Murdick rounding out the top five.

‘Dad’s been really good here, him and we have been fighting at this place all year and I love it,’ King, Jr. said in Terry Bowser Excavating Victory Lane. ‘It’s a dream for me, to race side-by-side with my dad, it seems like every other week here, for the win. We had a great car, I passed a lot of good cars, hats off to those guys and hats off to Lernerville Speedway for giving us a heck of a racetrack to race on.’

Cole Macedo led all 25 laps of the Peoples Natural Gas Sprint feature event but there was no lack of excitement for the first time Lernerville Speedway winner. Macedo jumped out to the lead at the start and stretched out to over a two second lead but on lap six, Macedo climbed the left rear tire of the lapped car of Davey Jones that about ruined his evening. Jones pulled up lame after the contact to bring out the events only caution. Macedo sustained some front wing damage but was able to continue and dominate until on lap 22, while having a 6.6 second lead over the field, he spun in turns one and two. Macedo did a complete 360-degree spin and kept rolling without bringing out the caution to hold onto the lead. The monster lead he had was cut to 1.3 seconds, but Macedo was able to hang on to capture his first Peoples Sprint feature at Lernerville Speedway. Seth Zabo followed Macedo in second while Carl Bowser, Brandon Spithaler, and Darin Gallagher rounded out the top five. ‘Man, it’s just so awesome, this car is a rocket! The fact that we spun out and still won, it just blows me away,’ an excited Macedo stated in Victory Lane. ‘We were battling some brake issue there but man, it’s just awesome how fast this car is.’

Colton Flinner used the middle groove to perfection during the Precise Racing Products Late Model feature to outduel Jared Miley to pick up his first win at Lernerville Speedway in 2021. After completing every lap available to him at Tuesday’s Test & Tune, Flinner had his orange #48 dialed in and on lap 20 of the 25-lap feature, took the lead for good from race long leader Miley. Ninth starting Michael Norris made his way to the runner-up spot as Miley crossed the finish line in third. Tyler Dietz, who started 15th came home fourth while Logan Zarin was fifth.

‘This is just so awesome, this is the first time I got a win with my daughter here, it’s the coolest feeling in the world, I can tell you that much, ‘an emotional Flinner said in victory lane. ‘I can’t thank John Johnson (car owner) enough, that man can give up on me at anytime and he continues to believe in me, I can’t thank him enough.’

It was a milestone night for the Millerstown Pic-A-Part Penn/Ohio Pro Stocks as Corey McPherson crossed under the Lernerville Speedway checkered flag first for the 50th time in his career. Brian Daugherty had an early 3.5 second lead but by lap 8 of the 20-lap feature, McPherson had started to close the gap and by lap 12 the familiar #C33 was on the rear bumper of the leader. McPherson patiently stalked the leader until lap 16 when McPherson made his move to get by Daugherty for the lead enroute to his monumental 50th Lernerville win. Daugherty slipped to fourth in the final rundown behind Chris Schneider and Andrew Gordon who finished second and third respectively while Curt Bish completed the top five. ‘That number (50 wins) doesn’t even feel real,’ McPherson stated in Victory Lane. ‘I’m humbled to be here, we’ve been working at it all year long, we’ve been close the last few weeks and to be so close to Joe Kelly (52 career wins) in wins, it’s just something else. Right now, the goal is to get to him (Kelly), this is the best car we’ve had and hats off to all the guys (crew) over there, I just couldn’t be happier to be here.’

Next Friday, August 13 the Fab4 Revved Up with Marburger Farm Dairy will be in action. There will also be Go-Kart’s and Micro Sprints on display for fans to check out in the main concourse. On Friday, August 20th it will be Manufacturers Night that will include a regular Fab4 weekly event.

Tickets for next Friday’s Fab4 Revved Up with Marburger Farm Dairy weekly show and all upcoming events can be purchased at www.Lernerville.com, the online home of Lernerville Speedway.