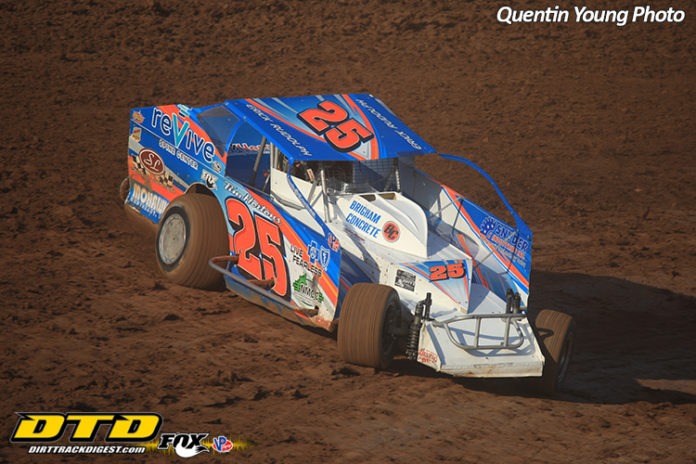 MARBLE, PA – Erick Rudolph set off the fireworks for the start of the 4th of July weekend capturing the BRP Modified Tour Sid Unverzagt, Sr. Memorial event at Knox Raceway on Saturday, July 2nd.  Picking up the RUSH Wingless Sprint Car feature win was Gale Ruth,Jr. and taking the checkers for the RUSH Sportsman Modifieds was Justin Shea.

On a beautiful July weekend, Knox Raceway held their second circle track event of the 2022 season under Brian and Brianna Steinman’s ownership.  A full pit area of cars was on tap for the three division event.  The track hosted the Sid Unverzagt, Sr. Memorial race and the 24-car field was paced by Sid Unverzagt, Jr. to honor his father before the start of the feature.  On the pole for the BRP Modified Tour event was Steve Barr and alongside was Erick Rudolph.  The pair brought the field to the drop of the green flag with Rudolph sprinting into the first turn ahead of Barr.  Rudolph led the first seven laps with Dave Murdick, Rex King, Jr. and Billy Van Pelt close behind.  The caution flag waved at the end of lap seven first for Sid Unverzagt, Jr and then for Steve Slater.

On the restart, Rudolph was the man in charge as he took the lead, lapped all but the sixth-place car, and led every single lap of the 35-lap event.  The race paid $2,500 to win and an additional $1,840 in lap money was added for a total of $4,340.  Finishing second was Murdick with eight place starter, Billy Van Pelt finishing in the top three.  Fourth place went to Rex King, Jr. with Brian Swartzlander rounding out the top five.  There was  also an additional $725 in special awards distributed to the following drivers: Highest Finishing 358 Modified – Kyle Fink; Lowest Finishing 358 Modified – Tyler Willard; 13th on lap 13 – Mike Kinney; Longest Tow – Tyler Willard; Best Appearing Car – Billy Van Pelt; Hard Charger – Ray Bliss; Hard Luck – Rick Regalski and 2 DNS – Rick Regalski and Shawn Kozar.

In the RUSH Wingless Sprint Car feature Brandon Blackshear started on the pole position with Blaze Myers to his outside.  Blackshear led the first four laps before the only caution of the race came out for Joe Buccola.  On the restart, Blackshear once again retained the lead, but it was short lived as mechanical problems eventually sent him pit side giving the race lead to John Mollick.  Mollick led through the tenth lap with eighth place starter Gale Ruth, Jr. closing in each lap before taking over the lead on lap 11 and went the final nine laps to pick up the feature win.  Finishing second was Mollick with Andy Priest third, Blaze Myers fourth and Arnie Kent coming the ninth position to finish fifth.

The RUSH Sportsman Modifieds were up next which found Justin Shea and Jake Rutana leading the pack to the drop of starter, Brian Wagner’s green flag.  Shea sprinted off into the lead with Kole Holden close behind.  Shea led the field while the battle behind was for third with JC Boyer and Ayden Cipriano battling for the position.  The yellow flag flew for Ben Easler who came to a rest in turn four on the seventh lap.  On the restart, the yellow once again flew for Dalton Gabriel and Rutana.  The next restart found a major 6-car pileup in turn two, there were some damaged cars, but no one was injured.  Finally on the final restart of the event, Shea once again jumped out into the lead and led the final twelve laps with Holden right on his rear bumper but was able to make the pass for the lead.  Shea went on to win the event with Holden second.  Following closely behind was Ayden Cipriano, Jake Rutana and Chelsie Kreigisch rounded out the top five.

Coming up next at Knox Raceway on Sunday, July 24th will be the Big Mav Classic for the Allegheny 305 Sprint Tour along with RUSH Wingless Sprints, 270cc Micro Sprints and the Jr. Sprints.

Knox Raceway owned by Brian and Brianna Steinman was purchased late in 2021 and has opened for the season in 2022 to provide entertainment for the local community by hosting Demolition Derbies, Truck and Tractor Pulls, Circle Track Racing and in the future Rodeos, Concerts, and many other fun events.  Knox Raceway would like to send a special “Thank You” out to our sponsors for the 2022 season which include Branson Tractors, Burford and Henry Real Estate, Clarion Boards, Felling Trailers, Ferringer Enterprises, Heeter Enterprises, Knox Bakery, Modern Living, Pennwest Homes, Unique Fabrications, Welcome Homes, Bills Service and Corcetti Contracting.