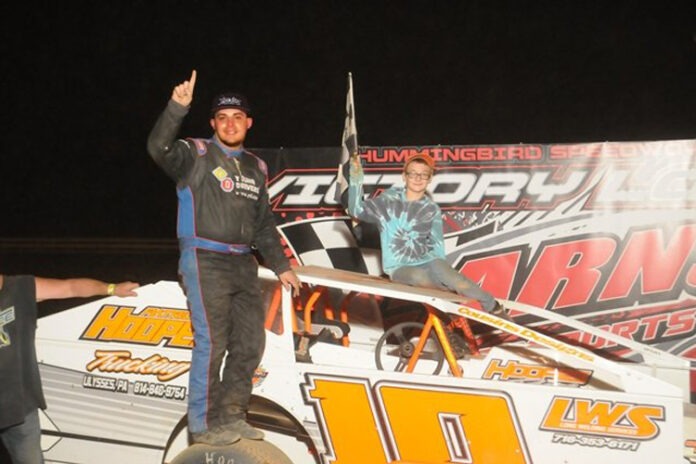 MARBLE, PA – On a beautiful Saturday in July Ryan Susice had the night off from his regular track so he ventured south from New York to Pennsylvania’s Hummingbird Speedway and picked up his second win of the season with the BRP Modified Tour. The 35-lap event went wire-to-wire and took under 10 minutes to run the entire race which went caution free.

Ryan Susice and Erick Rudolph led the 17-car field to the green flag and Susice beat Rudolph to the first turn and as lap one clicked off was the leader of the race. However, the next lap Rudolph passed Susice in turn three to take the lead. Rudolph held a firm lead over Susice Rex King, Jr. Brad Rapp and Mike Kinney through lap eleven. The leaders started entering heavy lapped traffic on lap ten and using that to his advantage, Susice took the lead away from Rudolph on lap twelve.

By lap fourteen the lapped traffic became very heavy but Susice had no problem managing the lead ahead of Rudolph. By lap twenty-four Susice had accumulated a 1.5 second lead over the rest of the field. Susice held on to the lead and at the end of the race was 1.59 seconds ahead of Erick Rudolph in second. Susice went on to pick up his second feature win of the season, his first coming at Ransomville Speedway on June 24th.

Erick Rudolph held on to finish second ahead of Rex King, Jr. in third. Brad Rapp finished fourth ahead of Chas Wolbert in fifth.

Picking up heat race wins were Dave Murdick and Erick Rudolph. Brad Rapp won $175 for drawing pill #4 in memory of the late Rick Hall, board member of the BRP Modified Tour.
The next race on the BRP Modified Tour schedule will be the Ralph Quarterson Memorial race on August 13th at Michaels Mercer Raceway and will pay the winner $3,300. Don’t forget our big 25th Anniversary Weekend Spectacular is coming up on Friday and Saturday,

September 9 & 10th at Michaels Mercer Raceway. The Friday night portion will be the final points night for the BRP Modified Tour series and then on Saturday, September 10th the Big Event to celebrate our 25th season will take place which will be a 50-lap $7,000 to win, $500 to start event with a Non-qualifiers race which will pay $750 to start. We will also hold our banquet at the track facility at Noon on Saturday, September 10th and will distribute point money to the top 20 drivers.