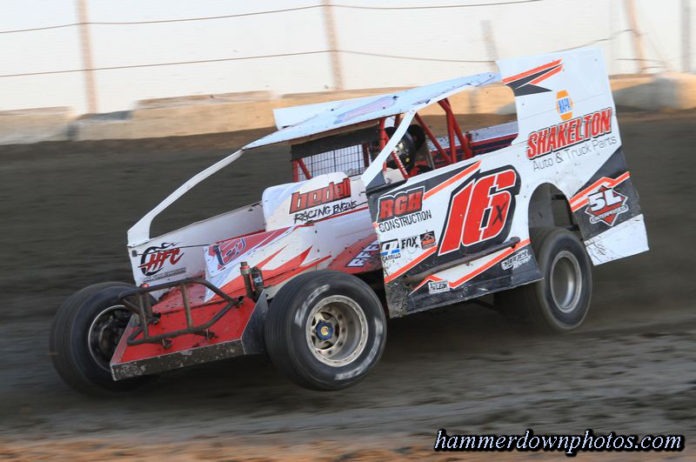 The race was run in memory of popular and respected Southern Tier racer Wade Decker, who passed away much too soon in December 2011.

Creeden earned $5,500 for his efforts in the 50-lap event at the three-eighths-mile oval where he earned the 2016 Modified championship.


“I can’t say enough about what this series does for working guys like me. The money that we get to race for is awesome.”

Creeden picked 31 out of a possible 60 through the gate and drove from sixth to win his 10-lap qualifier. A runner-up finish in the dash placed him outside Andy Bachetti on the front row for the main event.

Creeden stalked Bachetti through the race’s opening laps, ultimately working the inside to take command after an extended side-by-side battle.

Through a long stretch of green-flag racing in the race’s mid-portions and a number of late-race yellows, Creeden maintained control of the event for the fourth STSS victory of his career since the series’ inception in 2014.

Creeden received $500 cash in addition to his $5,000 winner’s share for leading the race’s halfway lap.

Bachetti, of Sheffield, Mass., closed on Creeden during several intervals but settled for a runner-up finish. Bachetti’s pay was boosted by his $500 Cash Dash conquest earlier in the night.

“To come here and finish second to Danny, we’ll take it,” Bachetti said. “He’s been fast here all year like we’ve been over at I-88. This is a big boost for us with the points.”

Bachetti, in fact, was able to inch ahead of Erick Rudolph by a mere five markers entering the Short Track SuperNationals 9 on Oct. 7-8 at I-88.

Alan Barker of Norwich, N.Y., authored a steady drive to finish third. Barker was thrilled with his effort.

“I didn’t qualify for this race last year and I didn’t even qualify for the (STSS) ‘Lightning on the Mountain’ here in May,” Barker said. “To be up here on the podium, I’m happy.”

Mike Mahaney of King Ferry, N.Y., placed fourth in the Jim Shear-owned No. 77X, while Johnstown, N.Y., driver Craig Hanson finished a stout fifth, his strongest STSS effort to date this season. Hanson ran inside the top-five for the entire distance.

Following a tangle on the opening lap, Waldwick, N.J., driver Tommy Meier charged through the field to recover for sixth with Jeff Behrent’s No. 3. Completing the top-10 were Cory Costa of Corning, N.Y., who – like Meier – rebounded from an early spin; Nick Rochinski of Dickson City, Pa., who started 20th (and received an Integra Shock Package bestowed upon him by the Decker family); a rim-riding Matt DeLorenzo of Cropseyville, N.Y., rallying from 24th in the BBL Companies No. 3D; and 25th-starting Brett Tonkin of Carbondale, Pa., in his self-owned No. 15.

Brian White of Owego, N.Y., who was the Thunder Mountain ’16 champ, romped to a $750 payday in the accompanying 20-lap Open Sportsman event. White led Chance Spoonhower across the line. New Jersey’s Steve Davis recovered from a mid-race tangle for third, Eddie White and Kevin Jordan.

The 25-lap, $1,000-to-win Crate 602 Sportsman event went to Milford, Pa., driver Brian Mady, who wrestled the lead away from Pat Jordan mid-race and marched to the win, solidifying his championship season. Jordan finished second, ahead of an outside-running Shayne Spoonhower, Dustin Jordan and Kenny Hammond.

An emotional Mady dedicated his victory to the memory of close friend and true race chaser Pete Gardner, who passed away during the week.

Jonathan Carpenter completed a sweep of the Wade Decker Memorial events by Thunder Mountain champions when he took the checkered first in the 20-lap Street Stock event. Carpenter earned $1,400 including his halfway leader bonus and Cash Dash win. Carpenter led the event from start-to-finish in a borrowed car from Eric Boynton after he flipped his primary mount the week prior at N.Y.’s Skyline Raceway.

Carpenter credited his grandfather for supplying four fresh tires to use in Friday’s event.

Lanson Albanese chased Carpenter to the line, ahead of Gene Sharpsteen (up from 19th spot), Doug Stack Jr. and Damon Decker, who pitted and recovered for a top-five effort.

Friday’s program completed the 2016 racing season at Thunder Mountain. A date for the Awards Banquet will be announced in the coming weeks.

Next up for the Short Track Super Series is the 2016 edition of the “Working Man’s Race” at I-88 Speedway with the two-day Short Track SuperNationals 9 Friday-Saturday Oct. 7-8, highlighted by the 50-lap championship round of the Halmar International North Region on Saturday night.

The Decker family went above and beyond for the event, displaying two of Wade’s race cars (a Modified and Street Stock), printing event tee-shirts, providing bonuses and special awards, fireworks, confetti and more….

Despite being postponed by weather, the Wade Decker Memorial drew a solid crowd and 45 Modifieds, 22 Open Sportsman, 22 Crate 602 Sportsman and 29 Street Stocks for a total of 118 race cars present….

Thunder Mountain track crews gave a wide and racy surface for the evening’s events, starting 10 minutes ahead of the scheduled starting time due to light rain in surrounding areas….

Tough night for Erick Rudolph, who entered the night as the STSS North point leader, being involved in an opening-lap tangle and pitting twice for right-rear flat tires. Rudolph elected to park his car after the second flat….