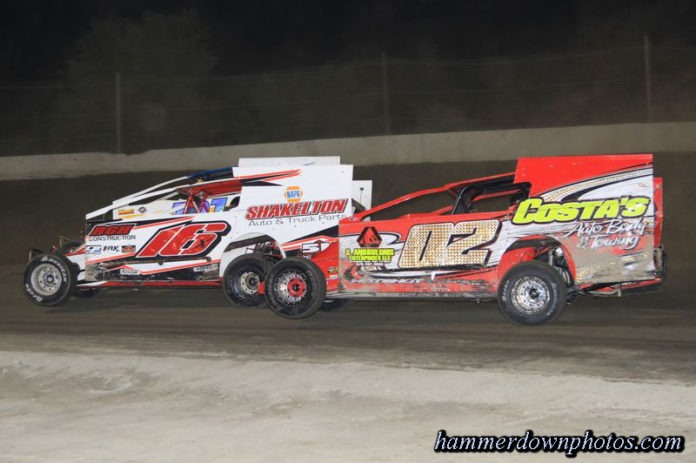 CENTER LISLE, NY – It was a quarter-century ago when dairy farmer Karl Spoonhower built a speedway in the rolling hills of Center Lisle, N.Y.

Towering over farms below, it earned the appropriate name Thunder Mountain Speedway.
Now, 25 years later, Spoonhower and family are again at the helm of the three-eighths-mile clay track, with an ambitious schedule planned for the speedway’s silver anniversary season.
Prior to the ’14 season, Spoonhower – who had sold the facility – reclaimed ownership and began his efforts to revitalize racing on the Mountain. The surface was coated with new clay, state-of-the-art lights were put in place, kitchens were renovated, a backstretch fence installed and much more. Over the last three years, car counts have steadily increased, crowds responded and once again Thunder Mountain reclaimed its position as the leader in the area.

Last summer, it wasn’t unusual to see nearly 200 cars in the pit area weekly – nearly half of which were open-wheel Modifieds, Sportsman and Crate Sportsman.
Spoonhower hopes to continue that success into 2017.

“It took a few years to build it back up again,” he said. “Last year was the best season we’ve had since we reopened. I’m hearing a lot this winter about people building cars and planning to race up here.”


Modifieds again headline the weekly program at Thunder Mountain, with all engine combinations competing at a 2,400 lb. weight. American Racer tires and sail panels are weekly staples of Modified racing on the Mountain.

Sportsman competitors have three options to find their niche. The Open Sportsman class continues to thrive at the facility, in addition to a growing Crate 602 Sportsman division and entry level Budget Sportsman class.

For ’17, the Modified, Open Sportsman and Crate 602 Sportsman divisions will all be included in the lucrative American Racer Cup presented by Sunoco programs, providing the opportunity for thousands in cash plus tire certificates.

Spoonhower and his staff have put a bigger focus on technical inspection of the Crate 602 Sportsman, recently purchasing a Cam Pro Plus tool which will be utilized to provide a fair playing field in the class.

New for ’17 is the addition of sanctioned IMCA-Modified racing on a weekly basis at Thunder Mountain. The division needed a Saturday home after nearby Skyline Raceway in Blodgett Mills, N.Y., moved its race night to Friday and, to the south of Thunder Mountain, Five Mile Point Speedway in Kirkwood, N.Y., dropped the class through an uncertain off-season.

“We’re going to give the IMCA division a shot,” Spoonhower said. “I’ve had a bunch of calls and it sounds like we’ll have a good field of them with us being the only sanctioned track in the area on a Saturday night.”

Filling out the weekly program are Street Stocks, XCel 600 Modifieds and Four Cylinders.
During the winter months, Spoonhower and Co. took advantage of a slim window of mild weather to demolish the existing officials’/VIP tower. A completely new structure will be in place for the opener that is expanded to include indoor seating for fans and sponsors.
Practice day is set for April 22 on the Mountain, with the Season Opener set for April 29, headlined by a $1,992-to-win feature for the Modified division.

Weekly racing will continue on Saturdays through Sept. 9 with the exception of July 29 (off for the Broome County Fair).

A highlight event at the speedway is the fourth annual ‘Lightning on the Mountain’ on Sunday, May 28 (Memorial Day weekend) featuring the Bob Hilbert Sportswear Short Track Super Series (STSS) Fueled By VP Modifieds offering $5,000 to win and $400 to start, plus STSS Sportsman and Street Stocks racing for $1,000 to win in the Chad Sindoni Memorial.
Preceding the ‘Lightning on the Mountain’ will be a 25th anniversary celebration on Saturday, May 27 with a cake, giveaways, entertainment and more.

On Labor Day weekend, Thunder Mountain will roar to life with a Sunday night (Sept. 3) special featuring the Modifieds, Street Stocks (in a 50-lap feature), Sportsman and Crate 602 Sportsman.

A new Thunder Mountain Speedway website has been launched at www.thundermtnspeedway.net for all scheduling information and news.