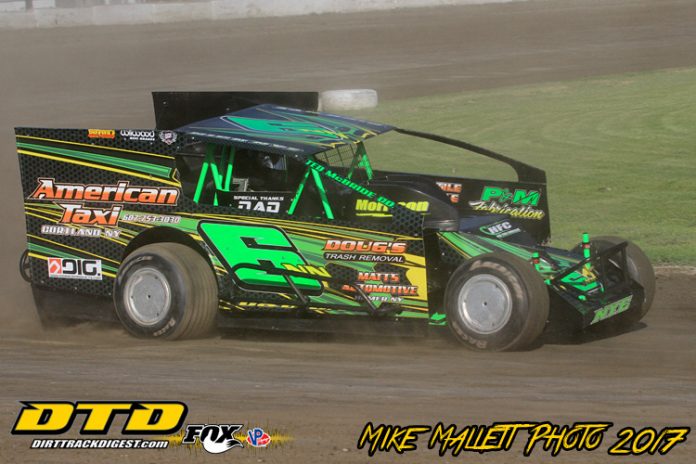 CENTER LISLE, NY – Thunder Mountain Speedway opened its 2018 racing season May 5th, just one week behind schedule on a gorgeous Saturday evening. The stands and pits were filled with eager fans and drivers ready to get the new season underway. Those fans were treated to some stellar racing action, including some late stage heroics and some very promising rookies who show cased their talent.

The mighty modifieds came out next to run for a $1,992 dollar winner’s check. This number is of course in reference to the year in which Thunder Mountain Speedway was originally opened. A full field of twenty four modifieds took the green behind pole sitters Damon Decker and Nick Nye. The seventeen-year-old Decker is already an accomplished racer. He claimed several wins last season in the ultra-competitive street stock division at TMS including a story book win in the Street Stock portion of last year’s Wade Decker Memorial. As the green flag flew over the mods Decker wasted no time, leaping out to a five car length advantage over Nye. Some early yellows allowed Nye to close the gap and begin to apply increasing pressure throughout the first half of the race. The yellow flew for a spun car on lap fourteen and when racing resumed, a four-car incident occurred that saw Butch Getz tipped over onto the right side of his number 5 machine. Getz climbed form the car unhurt while the other involved cars were able to pull away. One lap after the restart, Decker would commit the first and only error needed by Nick Nye, as the rookie hopped the berm in turn two opening the door for Nye. Decker would later give up the second spot to Jeremy Smith who had charged up from his seventh starting position. Smith showed tremendous speed in the final run and was closing on the leader when the laps ran out. Nye would visit the VP Racing Fuels Victory Lane and collect his big $1,992 dollar winner’s check.

A new winner, Mike Ferris, parked his 17z machine on the checkerboard after battling Michael Brown for several laps in the Four cylinder feature.

The 600cc Modifieds had the next spot on the evening’s docket. They were led to green by Byron Worthing and Doug Windhausen. When the green flew, Worthing surged to the point and never looked back, cruising comfortably to the opening night win.

Bill Ward Came out guns blazing after starting on the pole for the 20 lap IMCA Modified feature. Ward would lead the first twelve circuits with Rodney Morgan hot on his heels the whole way. The action was slowed for a four car tangle in turn four on lap twelve. On the restart, Morgan’s car came to life as he challenged Ward high and low for the top spot. The pair traded crossover moves on laps thirteen and fourteen. Morgan was able to the lead away for just a moment until the yellow flew again on lap fifteen. The last five laps brought fans to their feet as Rodney Morgan inched closer, showing his nose to Ward on the inside. The moment came on lap eighteen when entering turn three, Bill Ward slipped up just enough for Morgan to see daylight. Pouncing on the opportunity, Rodney completed the slide job on the exit of four with the white flag flying overhead. Ward tried in vain to crossover in one and two but it was no good. Rodney Morgan led only two laps of this IMCA Mod feature but one of them was the last and soon he was celebrating in victory lane. Billy Ward hung to second while Tyler Stoddard drove home in third.

The Street stocks were out next with Jon Carpenter and Earl Zimmer on the front row. Zimmer came out of the first two corners with a lead that he held until the checkers. The race was not without excitement however, as the battle for the remaining top five spots was hotly contested. Mike Wilbur would get the better of the others, pedaling his S I X machine to a second place finish, Gene Sharpsteen was third.

The Crate Sportsman took to the track to run for what is now a weekly $1,000 winner’s purse. Jimmy Zacharias and Rich Talada paced the field of twenty-one Crate sportsman to the green. Zacharias would lead past the halfway mark with Shayne Spoonhower nipping at his heels and Kenny Hammond running third. A trio of quick yellows bunched the group together for a single file restart with five to go. The top three ran in that order until lap seventeen when Kenny Hammond suddenly found the sweet spot right up against the cushion. Hammond powered by Spoonhower on the top side with the parrell sticks in the air. He continued to ride the wave of momentum to the outside of Zacharias on the final lap, completing the pass and sealing the win on the exit of turn four.

The Open Sportsman had the final feature event of the evening with Billy Spoonhower and Brain Mady sitting on the front row. Mady moved immediately to the point at the drop of the green and dominated for the remainder of the thirty lap main. Mady’s torrid pace was slowed once by an early yellow, allowing him to put a lap on all but the top six. A second yellow supplied a green white checkered finish and a glimmer of hope for those running second on back but Brain Mady was not to be denied as he galloped to the win.