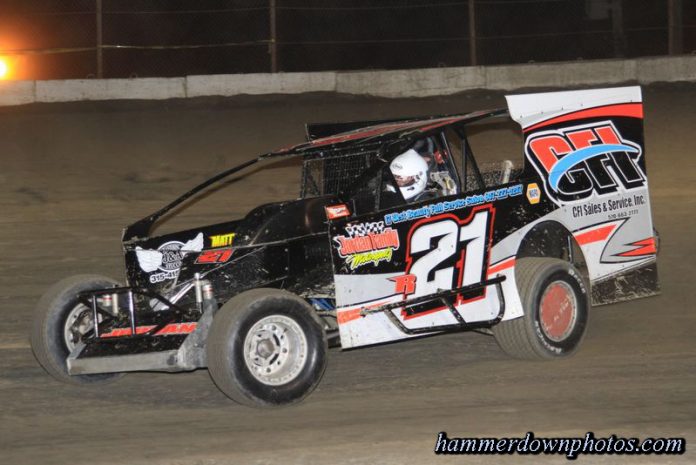 CENTER LISLE, NY – Over 120 race teams and the fans that follow them filed into the Thunder Mountain Speedway for a regular 8-division show sponsored by Yanmar dealer, Upstate Tractor and Mower.

Jared Green and Rich Gardiner shared the front row for the 20-lap 600cc feature but it was Binghamton, NY driver, Dana Davis who led the first circuit. Davis charged out to a formidable advantage and seemed untouchable until he slowed on lap 11 and went pit side. This put the race in hands of second-generation racer Jared Green, son former Street Stock ace Rich Green. The rookie pilot held the top spot for four laps under heavy pressure from double duty driver Chris Jordan. Jordan found the high groove to his liking as he made his way by the young Green. Jordan would lead away from a single file restart on lap 16 and go on from there to his second 600cc win of the season.

The Crate Sportsman rolled out next for their 25-lap feature dance. Hilary Ward and Tighe Sherlock sat on the front row as the stacked field of 24 crate competitors came to the green. A pair of early incidents shuffled the deck significantly and when the event got underway, it was Spencer, NY native Mike Austin at the head of the field. The event went green for the rest of the distance with Austin showing the way. In his interview, Mike stated that it had been nearly 15 years since his last win on the Mountain.


Tom Donahue and Matt Spencer then led an 18-car pack onto the speedway for the 20 lap Street Stock main event. Spencer would lead early with Donahue taking over the top spot. Jerry Lobdell Jr would chase Donahue from second for 9 more laps until Donahue slipped far enough in turn 4 for Lobdell to get through on the low side. The yellow would fly on the same lap for an incident. Two laps after the restart while running in second Donahue would get loose coming off turn 2. His slide brought him across the bow of fourth place runner Shawn Boynton. Boynton with nowhere to go made contact with the 717 of Donahue, catapulting him into a hard tumble that ended with the car on its roof. Donahue who hails from Smithville Flats was able extricate himself from his inverted ride with no injuries. When racing resumed Susquehanna PA’s Shane Wolf Jr. found the line he needed to surge past Lobdell and take over the number one position. Wolf then set sail en route to his second set of TMS checkers.

The stage was then set for the Modifieds as Bobby Stahl and Damon Decker led the field of 24 to green. Speedsville resident Ryan Jordan would make the move from his third starting spot to lead lap one. Jordan would then engage in an epic battle for the point with Dryden NY’s Colton Wilson. On lap 7 Wilson found the momentum he needed to get by Jordan on the high side. Jordan then followed suit taking to the top shelf. The line change worked to great effect for Jordan as his Hig Fab chassis bit into the racing surface launching the CFI Sales & Service sponsored number 21 back into the lead. The pace then set by Jordan could not be matched although he needed to make one evasive maneuver when a lap car spun directly into his path. The win snapped Jordan out of a more than two-year slump and was well received by the Thunder Mountain fans, many of whom came to Little’s Lawn Equipment Victory Lane to join in the celebration.

The 20 lap IMCA Modified feature would go green with Bill Nichols on the pole and Billy Ward to his outside. Ward would grab the early advantage and lead more than half of the event meanwhile Billy’s son Will was making his way up through the pack after rolling off ninth. The Ward family would then fight a father son duel for several laps. The younger Ward would finally get the upper hand on lap 15 and drove on to the win with dad following him home in second.

The Open Sportsman would wrap up the nights racing program with their 25-lap feature. Tom Eiklor and Nick Mady set the pace as the field got underway. Nick Mady would power out to the point bringing brother Brian Mady who had started in third along with him. The yellow flag would fly five laps in setting up a double file restart. Brian Mady got the drive off the top side of turn two leaping out the lead following the restart. Brian showed the way from there to the checkers to score his fourth victory of the season.

Jake Mason led the entire 15-lap distance in the Rookie Sportsman feature after starting on the pole. This is Mason’s second trip to victory lane in 2018.

Richard Wagner also claimed his second win of the season in the 4-Cylinder class after holding off a challenge from point leader Justin LaDue.