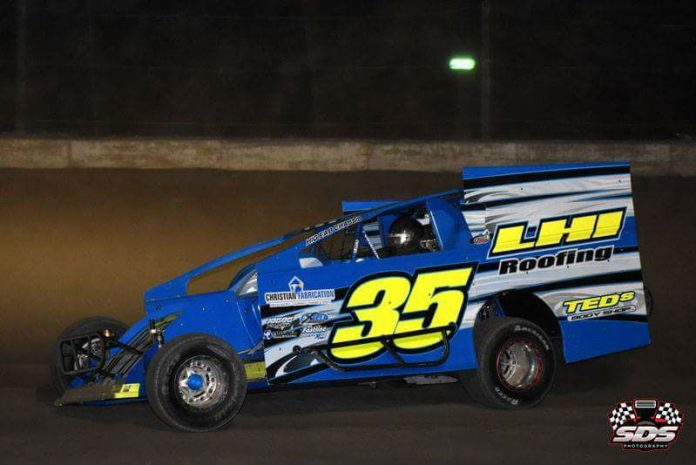 CENTER LISLE, NY – The battle for the 8 weekly division championships was on the minds of racers and fans alike with only three regular season point shows left in the 2018 campaign. More than 130 race teams signed in to the pit area and once again the Thunder Mountain prep crew had put together a table smooth and tacky racing surface.

Fabius, NY native Doug Windhausen became the first of three drivers to put two feature wins back to back on this particular Saturday night. Windhausen took the lead from Candor NY’s Dakota Anderson near the midpoint of the 20-lap 600cc Modified feature. The point scenario becomes very interesting going forward. Windhausen came into the night third in points only 3 marks behind Dana Davis and 11 points back from leader Chris Jordan who had a disappointing 15th place finish.

Don Russell and Tom Donahue led a field of 20 street stocks to the green. Donahue, who hails from Smithville Flats had a very strong car under him and showed the way for much of the 20-lap event with Russell giving close pursuit. The full fender racing was intense behind the front-runners and was highlighted by the climb of Shawn Boynton and Mike Wilbur who had raced their way into the top 5 after starting 10th and 12th respectively. Upfront, Russell was applying heavy pressure to Donahue for the lead. On the 15th lap, the leading pair came together exiting turn 4. As a result, Donahue spun to the infield and Russell was sent to the tail. This turn of events left Wilbur in command and he would hang on and make himself the second driver of the night to score two wins in a row. Point leader Shane Wolf Jr. would salvage his night by making a hard charge all the way from an 18th starting spot to finish third.

Next to roll out onto the speedway was the 25 lap Crate Sportsman feature. The 25-car pack of 602 hot shoes was led by lady racers Hillary Ward and Kimberlee Morgan. It was Rookie Damon Decker however, from his third spot on the grid that leapt by the two leading ladies to be the early leader. He would later succumb to pressure from Chance Spoonhower who had started fourth. A few caution periods that saw point leader Jimmy Zacharias suffering a series of three flat right rears slowed early progress. Berkshire racer Kenny Hammond had been picking his way toward the front and by lap 16 found himself running third. Hammond took to the top groove on the speedway and with tremendous momentum overtook second place Corey Cormier and leader Chance Spoonhower in a single circuit. Hammond would lead the rest of way becoming the third man to make back to back trips to Little’s Lawn Equipment Victory Lane.


The 35-lap Modified main event roared to life with Kailee Dimorier and Larry Mekic on the front row. Dimorier, the rookie mod pilot immediately, galloped out to an eight car length advantage over the battle for second between Lee Dewitt and Kevin Jordan. During the first long green flag run, Jordan would escape the duel for second and begin to reel in Dimorier as these two rookies maneuvered through lap traffic. Meanwhile, top point contenders Jeremy Smith and Alan Barker were slicing their way into the top half of the field. Smith the current point leader has been on a tremendous hot streak of late however, he suffered some mechanical issues early in the evening putting him last to start the feature.

The yellow flew for a minor incident on lap 17, bunching the field for a restart just short of half way. Jordan would get the hole shot on the green and take over from Dimorier. Jordan then looked to be on his way to his first modified win as he showed the way for another 16 laps. Behind him, however Alan Barker was charging. The yellow flew once more on lap 32 setting the stage for a three-lap dash to the finish. Jordan would get away on the restart but Barker was hot on his heels. He looked to the low side and found it closed by Jordan with two to go. As the white flag flew, Barker took his machine to the top shelf. As the pair entered turn three Jordan held the lead. The highside hustler once again earned his moniker as he pulled even in four and won the drag race to the line. With this win Barker picks up only a handful of valuable points as Jeremy Smith put on a spectacular comeback run to finish in 4th.

TJ Frost and Tom Eiklor sat on the front row for the start of the 25-lap Open Sportsman feature. Eiklor would be the early pace setter until point leader Chris Jordan would come to take the top spot away on lap 6. Jordan would stay relatively unchallenged for the remaining 19 circuits and bring home his third set of checkers, padding an already comfortable 54-point lead in the championship standings.

The IMCA modifieds would round out the evening’s action as Jeff Cardinale and Bill Nichols set the pace for the start of their 20-lap feature. Nichols would charge out to a good advantage on the start and lead the first five laps. Despite the early success, Nichols was battling an ill handling car and lost the top spot to veteran Ray McClure after nearly spinning in turn two. The yellow flag would fly a few laps later for a crash in turn three and four that sidelined point leader Will Ward. As the rest of the event unfolded, it became clear that it was McClure’s night to shine. He led the rest of the event finally ending a 6-year drought.

Justin Ladue was back on the black and white squares after besting recent winner Trey Palmer in the 15-lap 4-Cylinder Division feature.

It was Tess Horvath taking the honors in a 12-lap exhibition for the Slingshots.

Two point races remain for the season and the point battles are close for many of the classes. Should inclement weather cancel the August 25th show, racing will take place Sunday, August 26th. September is full of big races you will not want to miss.