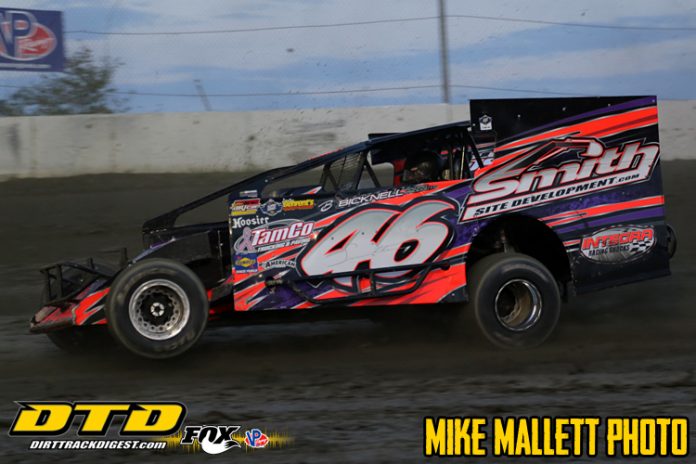 CENTER LISLE, NY – Racers all over the region have had this weekend circled on their calendars since Thunder Mountain Speedway released its 2018 schedule back in January. The big doubleheader weekend kicked off Saturday with the 100 lap, $2000 to win Street Stock Shootout. The Modifieds and 600cc Mods also joined the dance card along with a strong 36-car group of Crate Sportsman with their tops pulled down ready to duke it out for a quick $500 bucks and a guaranteed spot in the following days’ TOPLESS 100.

The 600cc Mods had the honor of leading off the feature-racing program. Dana Davis and Adam Mudge led the field of 21 to green for their 20 lap main. Davis got the hole shot and motored quickly out the early lead until a yellow flew on lap 2 for a multi car incident at the exit of turn four. The melee sidelined track champion Chris Jordan and caused some significant sheet metal damage to several others. Davis continued in dominant fashion until colliding with a slower car on lap 19. This put the race into the hands of Jake Waibel for the one lap dash to the finish. Waibel gave a valiant effort at defending the home turf but it was invader Bailey Boyd who surged into the lead. With a tremendous head of steam off the restart Boyd overtook Waibel at the entry to turn one and rocketed to the victory. The top five in this race gave a great preview of the future of local racing as four of the top five finishers were young second generation drivers including Chase Scutt who came home with a career best second place finish.

Thirty-six Crate Sportsman signed in to dash for the $500 check and provisional spot in the Topless 100. Thunder Mountain officials broke the field into four groups to race eight lap preliminary dashes, with the winner of each moving into the final money round. Shayne Spoonhower won the first preliminary bout, with Steve Davis grabbing the win in the second. Cole Stangle drove his way to the front of the third prelim and Dave Marcuccilli picked up the fourth and final dash starting spot. The prelim running order set the four-car grid for the five lap Dash for Cash and Shayne Spoonhower would show the way for the entire distance holding off the challenge from Marcuccilli. The win net a quick $500 cash for Shayne and the more crucial guaranteed spot on the grid for the $12,000+ to win TOPLESS 100 Presented by Bob Hilbert Sportswear.

A potent field of 21 Modifieds roared to life for a 35 lap feature with Brad Rothaupt and Rusty Smith on the front row. This event got off to rough start as the pack came off turn four; Chris Jordan encountered a loose wheel on the track and found himself tumbling for a full one and a half barrel roll. Jordan finally came to a rest on his lid as the track crews rushed to the scene, quickly righting the battered machine. Thankfully, the safety gear had done its job admirably and Jordan stepped away unharmed. Rothaupt would take the advantage on the restart and show the way for 3 more laps. It was at that time that Jeremy Smith rocketed by Rothaupt into the lead. Smith then set an impressive pace for the remaining 31 laps. Smith was in a class of his own on this night and when asked in victory lane about changes made to the car, Smith admitted to having simply swapped his 46 numbered door panels onto teammate Billy Decker’s ride and sliding in behind the wheel. The strategy proved sound as Smith notched his first postseason win of 2018.

An outstanding 29-car field featuring the very best and brightest of the southern tier’s Street Stock contenders were introduced to a packed house. Those fans then spoke in unison to give the command to fire engines. As the field rolled away they were led by a front row that consisted of invader Jeremy Potrzebowski on the pole and track regular Rich Green to his outside. When the green waved, Rich Green rolled out the early advantage. A former track champion, Green held the top spot for eight circuits until succumbing to heavy pressure from another former champion, Jonathan Carpenter on lap 9. Unfortunately, Green would spin out of contention on lap 14 after running across a water slick laid down by a blown radiator hose on another car. This left Carpenter alone in the front with a pair hard charging invaders, David Matwiejow and Glenn Whritenour. Carpenter was up to the challenge however with a car that seemed to leap away from the field on restarts. In the next 20 to 30 laps the TMS regulars began to show their muscle as Gene Sharpsteen, Butch Green and Mike Wilbur would all make their way into the top five with Whritenour still chasing Carpenter from second. When the yellow flew for the mid-way fuel stop it was Carpenter leading Whritenour, Sharpsteen, Wilbur, Butch Green, Steven Deinhardt 6th Trevor Dudley 7th, Rich Green had recovered to run in the 8th spot, Quinn Sutherland was 9th and Mike Decker rounded out the top ten.

At the start of the second segment, Jon Carpenter hopped right back up on his pony and rode out to set a pace that could not be matched. Carpenter would monopolize the second 50-lap segment while the rest of the top five remained much the same as well. For the third time this season Carpenter parked the Boynton Motorsports 3L in Little’s Lawn Equipment Victory lane. With Shadowland Body Shop coming on-board to sponsor a bump in the winners purse, Carpenter pocketed a cool $2250 and a gorgeous Henry .22 cal. lever action rifle courtesy of Firetower Doubles.

The Street Stocks return to postseason action next week, Saturday the 15th as part of the 6th annual WADE DECKER MEMORIAL. They join the stellar line up that is headlined by the Modifieds along with Short Track Super Series Open Sportsman, Crate 602 Sportsman and 600cc Modifieds.

Free camping is always available on the speedway grounds and VIP rooms are still available for rent on race nights. For rules and info on any upcoming events, visit us on the web at www.thundermtnspeedway.net or check us out on Facebook.