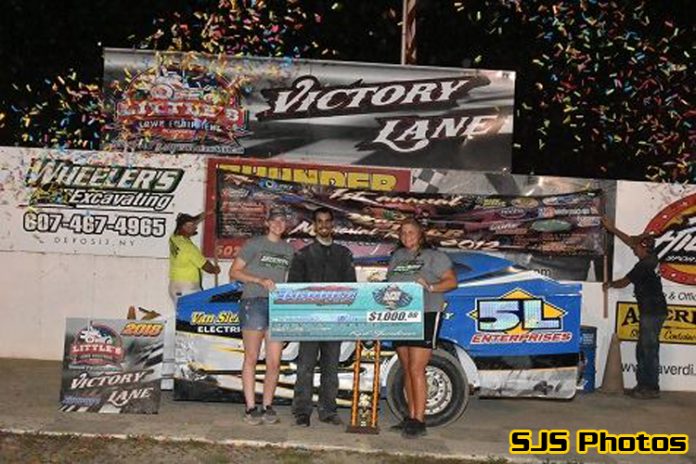 And it was a familiar name – but a new face – in Victory Lane.

The elder Roselli had the nickname of ‘Ice Man’ over the years. Now, the 21-year-old ‘Ice Cube’ is making his own path in the sport.


“I’ve been here to watch before,” Roselli said afterward. “But this is the first time I’ve raced Thunder Mountain.”

Roselli started his winning effort from fifth on the grid. He raced into second and began his pursuit of leader Don Hart, who had launched off the pole. After stalking Hart and working the low lane, Roselli opted for the topside of the three-eighths-mile oval and took the lead at lap 15.

Once out front, Roselli marched on to the win and was joined by members of the Decker family in Victory Lane.

Hart, of Bainbridge, N.Y., held on for a runner-up finish, followed by Dan Burman, Dale Welty (in the first Crate 602 car across the line) and Chris Jordan completing the front five.

Heat winners were Jordan and Hart.

Next up for the STSS Open Sportsman campaigners is the ‘Fall of 69’ at Bethel Motor Speedway in White Lake, N.Y., on Sunday, September 30 – 69 laps on the paved quarter-mile oval for $2,500 to win. All competitors will receive 60 points toward the series championship. Street Stocks, Legend Cars and Bandoleros will complete the Sunday afternoon card.