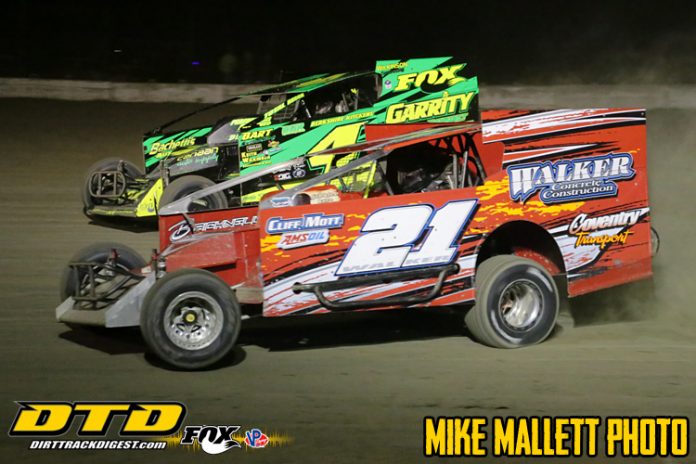 CENTER LISLE, NY – Shaun Walker and Andy Bachetti thrilled the crowd on Saturday night at the Thunder Mountain Speedway with a 30 lap battle for the lead.  The pair were side-by-side throughout the second half of the race with Walker coming out on top for the $5,000 win in the Wade Decker Memorial.

Brandon Walters took the lead at the green flag from the pole.  He paced the field for the opening laps before Walker moved into second from fourth on lap 11.  He then hounded Walters for the top spot.

Walker looked to have the lead secured on lap 21 only to have the caution negate the pass.  He inherited the top spot a lap later as Walters came up limp with something appearing to let go in the rear of his ride.

Walker was flanked by Bachetti for the restart on lap 22.  Bachetti, who started ninth, found a nice line around the top of the track while Walker methodically worked the bottom.  This allowed the pair to stay alongside one another lap after lap.

Traffic came into play as the race reached halfway.  Walker stayed true to his line on the bottom which cost him the top spot on lap 34.  Bachetti went around him to take over the position for the first time in lapped traffic.

Walker battled back through the slower cars to regain the lead on lap 37.  Bachetti took the lead back on lap 38, but the caution came before the it could be officially scored giving the number one spot in the order back to Walker.

The two talents resumed their race for the lead at the green.  Walker was again on the bottom, Bachetti pounded the top.  The pair were never separated by more than a few feet at the line as the laps clicked off.

Walker’s final test came with only three laps to go.  Walker found traffic again with Bachetti hoping to pounce.  Luckily this time the traffic played in his favor as he went on to take home the win in the 51-lap affair.

Bachetti crossed the line in second followed by Jerry Higbie Jr., who raced from 15th to third.  Alan Barker advanced from 16th to finish fourth while Jeremy Smith held off teammate Billy Decker to finish fifth.

Don Hart and Dan Burman were the pole sitters for the start of the 31-lap STSS Open Sportsman feature. Hart piloted teammate Skip Pickwick’s 33 car to the lead and held it there for several laps while Burman fell under pressure from Dominick Roselli. By lap six Roselli had worked his way by Burman and set his sights on the back bumper of Hart. It took the “Ice Cube” another seven circuits to move into striking distance on the leader. At the halfway mark, Roselli made a power move to the high side of the speedway taking the lead. Roselli monopolized the second half of the race as he cruised to the win while Don Hart held on to second.

The Wade Decker Memorial has always been special for the Street Stocks as well. Wade’s own preserved number one Street Stock car paced the field in the same fashion as his famous modified car did for the modified feature. The front row was occupied by 4th generation stock car pilot Shawn Boynton and the newly minted SS track champion, Shane Wolf Jr. The champ would flex his muscles early leading the first 6 circuits until coming under attack by dash winner Jerry Lobdell Jr. Contact between the two would send Wolf wide in turn four a few laps later and Lobdell would move into the lead. A restart on lap 9 would find Afton street stock champion Butch Green on the outside of row one. Five laps later Green would find the groove he needed to overtake Lobdell for the number one spot. Green would go on to the win with a comfortable 3-second margin of victory as Lobdell held off a challenge from Mike Wilbur to come home second.

The Crate Sportsman also joined the action with a 31 lap feature event. Todd Hayward sat on the pole with sophomore sportsman driver Garrett Rushlow to the outside. The first three laps would be run with Hayward at the point. An early caution flag re-stacked the deck and allowed “The Young Gun” Garrett Rushlow to get the hole shot and the lead. A long green flag run then ensued that saw Rushlow galloping out to a full straightaway advantage while gliding cleanly through lap traffic. The rest of the top five was highlighted by a duel of champions between Thunder Mountain’s own Jimmy Zacharias and AMP title holder Corey Cormier but no one had anything for Rushlow. The teenage pilot flew to his first ever trip to Little’s Lawn Equipment Victory Lane at TMS. This victory is made all the more poignant as one of Rushlow’s primary sponsors, Bolt Works Tactical Firearms of Dryden was recently gutted by fire.

The 21-lap 600cc Modified feature was led from start to finish by Jamie Frantz. Frantz started on the pole with Alex Tonkin to his outside. Tonkin would chase Frantz all the way to the checkers with Dough Windhausen third.

All eyes now turn to Sunday, September 23rd for LIGHTNING ON THE MOUNTAIN and the Bob Hilbert Sportswear, Short Track Super Series, fueled by Sunoco. Halmar North tour round 7. The Stars of the STSS will dance for 50 laps and a $5000 winners share. The $1000 to win round 4 for the STSS Crate Sportsman north tour will also be on the docket along with a 20 lap $1000 to win main event for the street stocks. For rules and info on any upcoming events, visit us on the web at www.thundermtnspeedway.net or check us out on Facebook.