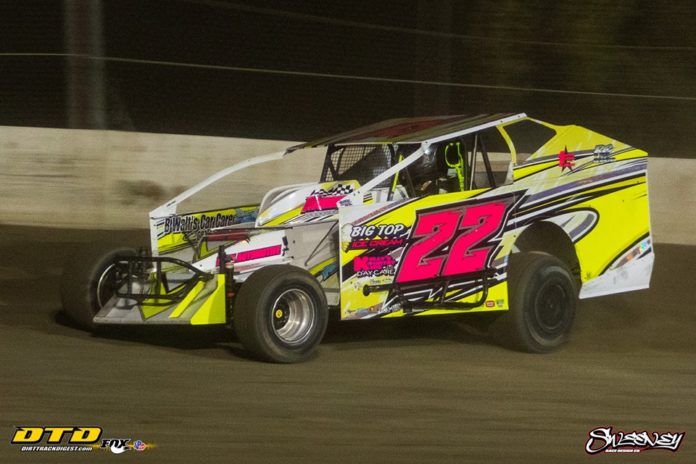 CENTER LISLE, NY – Brandon Walters had the hot shoe in the DIRTcar 358-Modifieds at Thunder Mountain, taking the lead from Shayne Spoonhower in the early going and walking off to the 30-lap win.

Spoonhower had a good start, jumping from third to first on the opening lap. A rash of early yellows meant Spoonhower never had a chance to run away and hide, especially once Walters lined up alongside him on a lap three restart. On two separate restarts, Walters stuck a nose out in front, but a yellow within a lap canceled the pass.

Finally, the field got some laps in, and Walters and Spoonhower went to battle. The pair ran side-by-side for four laps until a lap nine yellow, this time the scoreboard favoring Walters as leader. The field finally worked the wrecking out of their system following a lap 11 yellow, allowing Walters to get to work on the cushion.

Once Walters got in clean air, he quickly motored away from Spoonhower. With 20 on the scoreboard, Walters was up by a straightaway, with polesitter Tom Eiklor hanging within striking distance of Spoonhower.

A final yellow on lap 22 gave Spoonhower one last swing at Walters, but Walters kept up the same quick pace. No mistakes in the final eight for Walters meant he was headed to victory lane, winning the DIRTcar 358-Modified feature over Spoonhower, Eiklor, Corey Cormier, and Dave Marcuccilli.

“Those restarts were scary in the 358,” Walters said. “These things are all momentum, and one mistake on a restart that hurts your momentum will really bite you. Luckily, that all went our way tonight and we got a win. The Open Modified has been a bit of a challenge, but the 358 has been money.”