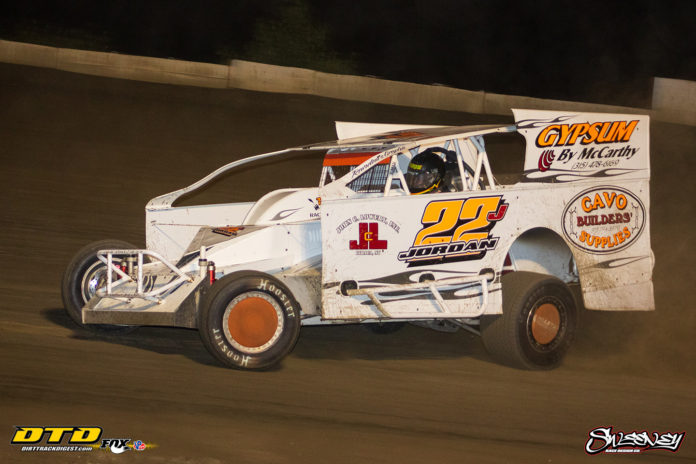 CENTER LISLE, NY – Chris Jordan is no stranger to Thunder Mountain Speedway victory lane, with track titles in both the Sportsman and 600cc Modified division. However, Jordan placed the biggest feather in his racing cap on Saturday night, holding off Billy Decker in a wild 35-lap Modified battle.

Rick Wilk led the opening laps of the Open Modified feature event, heading the first four circuits before Jordan slid underneath. Chris Stull followed Jordan, placing himself in second and Jordan’s primary competition for the time being. Through a number of early restarts, Stull hung tough, but Jordan fended him off every time.

Following a lap 11 restart, the field got some green flag racing in. Jordan held a small but constant one-second lead as the race hit halfway, but from Stull on back, action was heating up. Points leader Shawn Walker was making moves, up to third from tenth and Decker to fifth from fifteenth by lap 20.

Lapped traffic was thick and brutal, with a full field of cars packed in the quarter mile oval. Through traffic, Jordan held constant over Stull, but with ten laps left, Stull fell victim to Walker. Decker had worked into fourth, passing Jimmy Zacharias, but all of the aforementioned drivers were locked together in close formation.

The whole group reeled in Jordan, with Walker cutting the gap to under half a second. On lap 29, Walker’s car came to a quick halt on the backstretch, forcing the yellow flag to fly. The good news for Jordan is all lapped traffic was gone, but the bad news was Stull and Decker were on his rear bumper.

On the six-to-go restart, Decker made quick work of Stull. With Jordan low and Decker high, Decker inched closer to Jordan with every lap. With the white flag flying, Decker caught Jordan, taking one final run on the cushion. Jordan and Decker crossed under the checkered side-by-side, with Jordan getting the best of Decker by less than a tenth for his first career Modified victory. Following Jordan and Decker across the line were Zacharias, Nick Nye, and Stull.

“A win in a Modified here is insane, way above any other achievement I’ve had in racing,” Jordan said. “I never thought of getting here with the stacked talent we have in this field tonight. I feel sorry if I did anything bad or rough to Billy at the end of that, I’m a big fan of his, but I was driving for my life at the end of that one. I know some will say that I won because I started up front, but hey, someone has to start up front.”