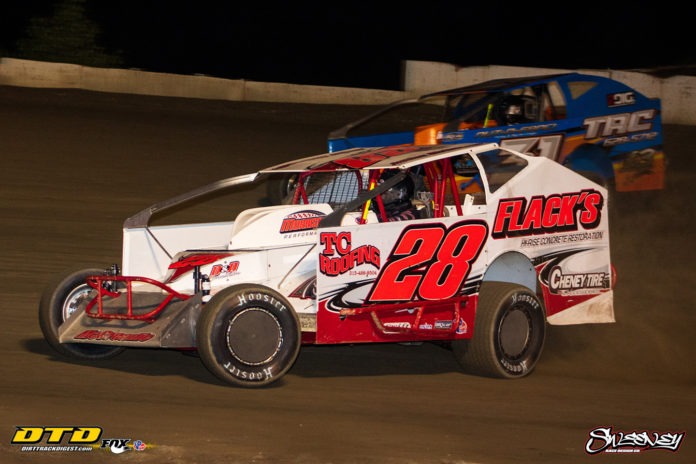 McCreadie jumped out in front of Willix at the start of the 358-Modified main, with McCreadie opening up a sizeable lead in the early going. By lap ten, McCreadie was up by a straightaway and ready to enter traffic, but a yellow for third-running Jeff Taylor removed both McCreadie’s lead and the traffic.

With McCreadie choosing the bottom, Willix went to the top and nosed out in front. Willix was scored the leader on lap 11 before a violent flip by Justin Crisafulli halted action. Roles were reversed on the restart, with McCreadie hopping to the high side and regaining the lead.

Once back out in front, McCreadie matched his earlier pace and re-established a good gap over Willix. Behind Willix, invader Larry Wight was on the move, pressuring Shayne Spoonhower for third after starting twelfth. By lap 20, McCreadie was once more up by two and a half seconds, seemly on cruise control.

A lap 24 yellow gave Willix and company another swing at McCreadie, but McCreadie had none of it, pulling away once more. When the checkered flag fell after 30 laps, it was McCreadie scoring his first of the season over Willix, Wight, Spoonhower, and Ronnie Davis III.

“When Lance got us, I figured we were running second at best,” McCreadie said. “I was surprised to be able to get back by him, restarts are so critical in these cars. This is a tough track that’s fun to run when you’re hooked up, and I’m glad to cross it off the list.”