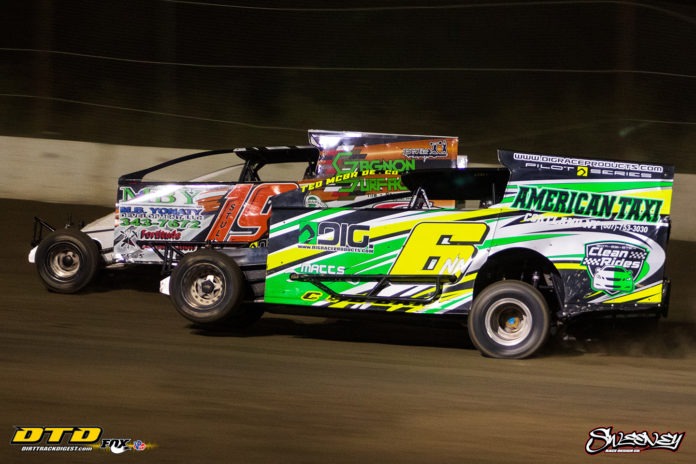 CENTER LISLE, NY – The month of August has begun and the Thunder Mountain Speedway kicked it off with a full eight division show on another gorgeous summer night.

The action in the Open Modified feature was intense throughout the first half of the race. After a lap two caution that damaged a good number of cars, the top five brawled for position during the green flag laps that followed. P.J. Goodwin, Rick Wilk, Nick Nye, Brandon Walters, and Billy Decker could not get away from each other and swapped positions lap after lap. Using the bottom of the track to his advantage, Nick Nye slowly and methodically worked his way into the lead and started to drive away from the field once he did. Despite suffering damage from the lap two crash, Billy Decker got himself up to second and was starting to close in on Nye. He ran out of time and Nye was able to take the checkered flag for his first win of the season. Billy Decker finished in second for the second consecutive week over Brandon Walters in third. Shaun Walker overcame multiple obstacles throughout his 35 lap feature and finished in fourth while the returning Jeremy Smith completed the top five finishers.

The DIRTcar 358 Modifieds continued their streak of entertaining racing with another thrilling run in their feature. Colton Wilson led the early laps from the pole, but dealt with some strong challenges throughout his tenure up front. Michael Stanton Jr. battled with Wilson hard early on, but he could never take sole control of the top spot. Last week’s winner Jordan McCreadie started in fifth place and was able to work his way up the front and challenged Wilson for the lead. He completed the pass around the top and started to distance himself from the field, but his race wasn’t over yet. Ronnie Davis III started back in 12th place and got himself up to second late in the going. He was chasing down McCreadie as the laps clicked off and made a dive going into turn three on the final lap to try to steal the win away. His attempt was unsuccessful and McCreadie held on for his second consecutive victory. Ronnie Davis III finished second with Colton Wilson, Corey Cormier, and Michael Stanton Jr. taking the top five spots coming underneath the checkered flag.

A tight points battle in the DIRTcar Sportsman division only got better after this week’s race. Stacy Jackson took the lead from the outside pole and led the majority of the race. The race saw lots of green flag racing, which allowed Tommy Collins to work his way to the front of the field from his 12th place starting spot. He challenged Jackson for the race lead for a few laps before finding the run he needed to complete the pass. In an unfortunate repeat of last week, the rear end fell out from underneath of Jackson’s machine as soon as Collins cleared for the lead. He did his best to hang on to the car for the final few laps, but the race’s one and only caution came on the final lap and ended Jackson’s hopes of salvaging a good finish. Collins was perfect on the restart and made it back around to the checkered flag to score the win. With the struggles of Alan Fink throughout the entire night, Collins now moves himself to the top of the points standings.

Redemption was achieved in the Wheeler’s Excavating Street Stock feature. After a first lap crash took out pole sitter Jake Fowlston, Earl Zimmer and Lanson Albanese battled hard for the race lead. Albanese won the battle and got comfortable in the race lead, but a mistake in lapped traffic cost him dearly. He made contact with the lapped machine of Cameron Searles, turning Searles around and bringing out a caution. Albanese fell back to fourth because of the incident, handing the lead over to Damon Decker. Decker would lead following the restart while Jerry Lobdell Jr. made his way into second. Lobdell was trying to make the late race pass two weeks in a row on Decker for the win, but Decker prevented that from being the case and kept Lobdell Jr.’s #2L machine behind him as they drove under the checkered flag.

Restarts showed huge importance throughout the 600cc Modified feature. Justin LaDue led the race from the pole, but surrendered it to Doug Windhausen off of a restart. The two drivers traded the lead throughout the race, most notably off of each restart that the race saw. Windhausen had the lead in the closing laps, but a caution on the final lap gave LaDue one last opportunity to take it away from him. Windhausen got the perfect jump and kept LaDue behind him to make a return trip to Victory Lane. The victory helped him extend his points lead over Jake Waibel who finished the night in the fourth position.

After a dominating month of July, Mike Morse continued his dominance to start August. Morse started fourth and immediately made a four wide move to take the race lead on the opening lap. The race had a number of restarts that he had to deal with, but he showed his strength on all of them and never allowed anyone else to take away his lead. He cruised his way to yet another victory and extended his points lead with the absence of Grayson Albanese who was second place in points heading into the night.

A first time winner entered Victory Lane in the Rookie Sportsman feature. Dane Hedlund led the early laps until Josh Allen took it away from him with a great move on a restart. Allen would lead a good number of laps until he was the victim of the same moved he pulled on a later restart. Jonathan Fowlston was the driver to jump around Allen to take over the lead. Fowlston kept his place at the front of the field from that point on and collected his first career checkered flag.

With a couple drivers making the move up to the regular division over the last couple weeks, the Rookie 600cc Modified division was left to be contested by just Logan LaDue and Josh Kashuba. Kashuba unfortunately had a mechanical failure on the race’s opening lap, leaving LaDue on the track by himself to cruise to victory.

After the postponement of the Super DIRTcar Series race originally scheduled for this upcoming Tuesday, the next race at the track will be next Saturday, August 8th. All eight divisions will once again be competing in another weekly outing at the Thunder Mountain Speedway.