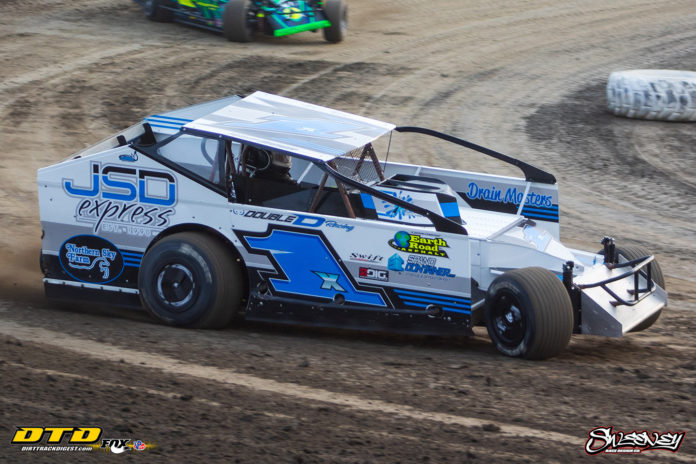 CENTER LISLE, NY – Willy Decker made it two wins in a row in Thunder Mountain’s DIRTcar 358-Modified division, holding off all advances of Larry Wight for the majority of the 30-lap feature to score a narrow victory.

Devin Willis led Jeff Taylor through the opening laps of the 358-Modified main, with Decker and Wight making ground in the early stages. By the time a lap nine caution waived, both Decker and Wight had got by Taylor for second and third, then both passing Willis on the restart.

Decker went to the top, and Wight floated around the middle to bottom. Wight gave Decker no breathing room, sticking within a carlength at halfway. On lap 17, Wight stuck a nose out front, but Decker kept the throttle down and used the momentum of the topside to keep the lead.

The battle didn’t lighten up in the final ten laps. Wight remained locked to Decker, but now a lapped car occasionally came into frame for the leaders. With three to go, Wight was ready to take one last shot at Decker, getting to Decker’s door. However, Decker used a lapped car running the bottom as a pick, forcing Wight off his lane and buying Decker just enough space to make it to the checkered flag first. The win was Decker’s second of the season and second in a row, with Wight, Pat Ward, Marshall Hurd, and Willis completing the top five.

“We definitely had to work for that one,” Decker noted. “Larry has been so good everywhere this year that I knew I was in trouble when he poked his nose in there. I found the top on an early restart, and luckily that lapped car we got at the end was on the bottom so we were able to use him to our advantage and hold off Larry.”