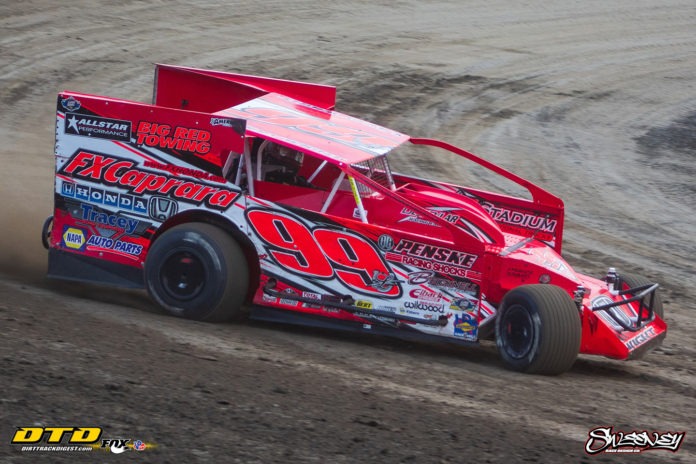 CENTER LISLE, NY – Larry Wight made a rare appearance at Thunder Mountain Speedway, his second of the season, and dominated the headline Open Modified division to grab his first win at the track. Wight got to the lead at halfway, then was never seen again by the rest of the pack.

Bailey Boyd and Landon Cummings battled at the front of the field early in the 35-lap Open Modified feature, never having a chance to get away from each other with three cautions in the first four laps. One driver using the restarts to his advantage was Wight, blasting from twelfth to fifth on the opening lap, then climbing to third once the field got into a green flag run. With Cummings leading, Boyd was left to fend off Wight.

Using the top, Wight got by Boyd on lap 14, then switching to the bottom to go after Cummings. On lap 16, Cummings shoved the nose up the track, while Wight turned low and drove to the lead. A lap 20 yellow ended Boyd’s good run and allowed Cummings to close up on Wight, but Wight bolted away from Cummings on the restart.

Brandon Walters was making hay on the bottom, sneaking by Cummings with ten to go. Cummings looked to be comfortably in the top five, but fell out with mechanical issues in the late stages. Out front, nobody was in the same area code as Wight, as Wight stormed off to his first win at Thunder Mountain by nearly five seconds. Walters crossed in second, with Nick Nye, Billy Decker, and Shawn Walker completing the top five.

“I had a feeling we’d check up pretty hard on that first lap, so I went way up top on the start and didn’t lift until I got to turn three,” Wight said. “We gained a lot of ground early which allowed us to be pretty patient the rest of the race. The track got real nice, and when we got in clean air, we were able to move around and get through lapped traffic pretty easy.”